Built in 1921, the historic Palace Theatre in downtown Calgary has earned its status as a landmark by providing the city with all manner of entertainment for nearly a century. It’s somehow fitting that it was built during the golden age of movie houses, as it helped escalate the drama that will ultimately unfold Saturday across town at the Scotiabank Saddledome.
The site of Fight Night Calgary’s open workouts, the line into the venue snaked down snaked down 8th Avenue and ultimately filled the floor of the theatre to get a glimpse of their favorite UFC stars. 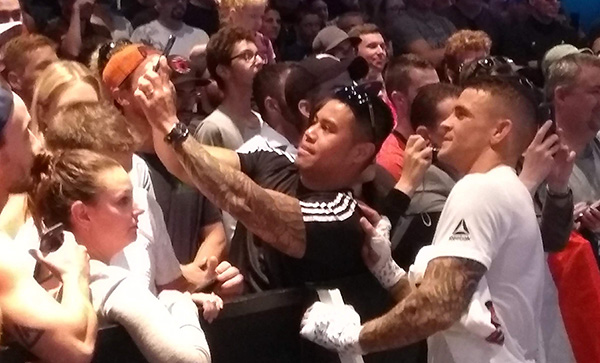 “These are definitely fight fans,” confirmed headliner Dustin Poirier. “I’ve main evented three shows in a row, and this is the most active, loud crowd of the last three cities I’ve been in. It’s fun. These guys show up, they want to see a good fight, and I’m going to give it to them.”
The crowd was certainly one of the biggest stars of the afternoon, transferring their electric energy into boisterous cheers for each athlete that snowballed with each successive fighter.
Tecia Torres kicked off the festivities by sharing the stage with two of her beloved dogs that made the trip with her. “They just make me feel at ease. Feel at home,” she explained. “They’re our buddies.” Showing off her trademark cardio and looking particularly shredded, she kept the intensity high and the smiles bright. In one particularly lighthearted moment, she unexpectedly dropped sparring partner and fiancé Raquel Pennington from behind when she wasn’t looking.

Jeremy Stephens followed with a frenetic mitt-hitting session that was clearly energized by the enthusiasm in the room. Echoing Poirier’s sentiments, Stephens declared “Canadian fans are some of the best fans in the world. They love a good fist fight, whether it’s in hockey or in the street.”
If Joanna Jedrzejczyk and Jose Aldo no longer hold championship belts, you would never guess as much by the reaction from the Calgary faithful. Respectively chanting “Jo-an-na!” and “Al-do!” throughout their workouts, the crowd offered a tangible reminder of the importance and legitimacy of the two athletes.

The high energy and positive vibes reached its apex with the show’s closer, Eddie Alvarez. Showing off a full arsenal of fight moves and near-acrobatics, The Underground King was loving the room. Like his peers before him, he praised his host city, calling it beautiful and pointing out that winning a few bucks at a Calgary casino earlier in the day only increased his admiration.
All the participants made their way through the audience after their workouts, patiently signing autographs, posing for selfies and gifting a few lucky fans with some free tickets. The sea of high fives and smiles was a perfect microcosm of the friendliness that Canada prides itself on.
Pointing to a crowd in front of the stage, Jedrzejczyk exclaimed “Calgary is a beautiful city. But you guys rock!”