A Win Over Raquel Pennington At UFC Fight Night: Lewis vs Daukaus Would Be The Perfect Way To End 2021 For Macy Chiasson
By Gavin Porter, On Twitter @ItsGavinPorter • Dec. 16, 2021

When 2021 started, Macy Chiasson was focused on ascending the UFC bantamweight rankings, but some injuries and some fights that fell through left her wanting only one thing – to end the year on a high-note.

“For me, it’s really special because I’ve only fought once this year and last year was kind of a bummer, as well, and I’m looking to be more consistent. This is what I love to do, and I want to do it and that’s why I’m here and I want to get it done,” Chiasson told UFC.com. “So, I’m just excited to go out there and show everybody what’s been up.”

What’s been up is that Chiasson has established herself a real player at bantamweight, building on her Ultimate Fighter title in 2018 and winning four of five inside the UFC Octagon. Chiasson’s last victory came in the form of a unanimous decision win over Marion Reneau in March. That win gave Chiasson confidence and helped her earn a shot a highly ranked opponent in the form of Aspen Ladd.

A statement win over Ladd would have put Chiasson on a short list of contenders competing for a bantamweight title shot, but a broken foot and a weight cut issue for Ladd forced that fight to be cancelled at the eleventh hour twice.

After training to fight Ladd for over six months, Chiasson moved on and started putting her name out there for short-notice opportunities. That’s when the phone rang.

“Whenever the opportunity arose to fight Raquel Pennington on short notice, I was like, ‘hell yeah, let’s do it. And if they can do it at featherweight that would be amazing’,” Chiasson said. “She’s a big-time vet, she fought Amanda Nunes and she’s fought some really amazing people, ranked people. She’s more well-known than Aspen, and this is a bigger name, but stylistically, I really like the matchup. I watched her fight with Pannie Kianzad a bunch of times and Marion Reneau, and I’ve fought Marion so I kind of get a feel of where I stand up against her.”

Being able to put those arduous fight camps to good use and hopefully earn a victory at UFC Fight Night: Lewis vs Daukaus would help savage a year that she feels got away from her a bit. Fighting someone as respected as Pennington also adds motivation for Chiasson, who’s been hungry to add a big name to her resume. 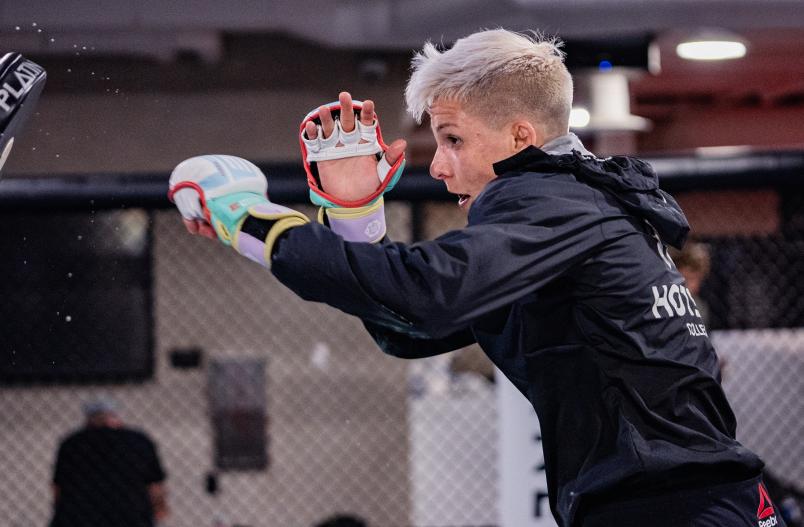 Chiasson admits that while she is a fan and she’s been watching Pennington for years, she’s been actively trying to get a fight with her for a while. She’s able to separate being a fan and having admiration for Pennington with the task at hand.

“I’ve been in the UFC for a while, and these are all people that I’ve been watching that I want to compete with, so I don’t have the feeling [of admiration] there,” Chiasson said. “Of course, there is adrenaline and some nervousness, but it’s all good energy.”

Only days out from that the moment she’s been waiting for, Chiasson is proud that her resilience has put her in the position to accomplish both her goals of ending the year with a win and adding a respected veteran to her record in one night. 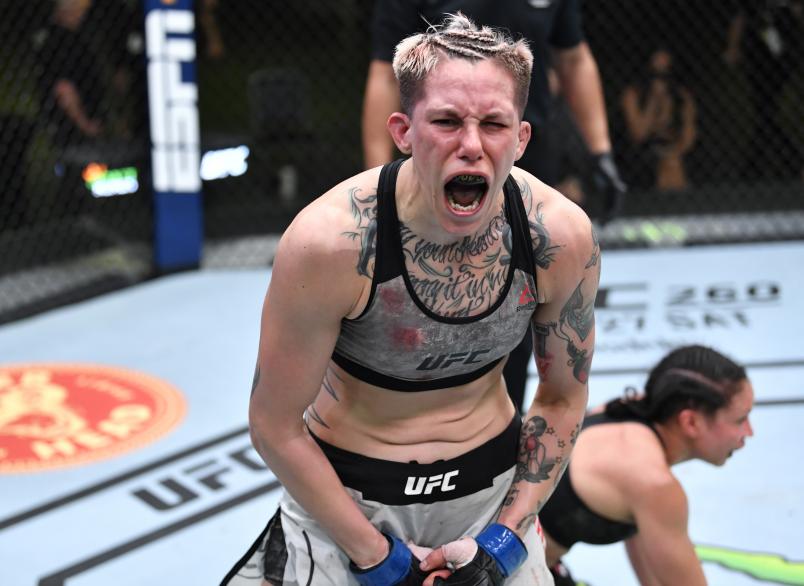 “I get to end this year with a win and open 2022 with endless opportunities,” Chiasson said. “I just got to perform and I’m looking to get a $50K bonus this weekend. Short notice, let’s get it done.”

“If I can get a really great win over Raquel Pennington this weekend on 10 days’ notice I think it’s going to open up a lot of eyes.”