Gonzalez To Rely On Instincts In His Return

“There was a point where I didn’t really feel like an athlete no more, kind of reconsidering my life,” he said. “It was like a crazy emotional roller coaster going up and down.”
By Zac Pacleb • Apr. 26, 2019

The last time fight fans saw Jason Gonzalez in the Octagon, he was on the wrong end of an arm-triangle in a loss to Gregor Gillespie. That fight was 19 months ago.

Since then, Gonzalez has suffered injuries, recovered from two surgeries and fought through the doubts any athlete would go through if they were unable to compete for such a long stretch of time.

When initially asked about how he’s feeling a few days away from his first fight in more than a year-and-a-half, however, none of that comes up at first.

“Honestly, the only thing I’m thinking about is just food,” Gonzalez said. “I just want to rehydrate, eat, feel good. I don’t feel too bad right now, but I’m not feeling the anxiety just yet, or the nervousness.”

His mind lingering on his stomach isn’t all too shocking. The first weight-cut in 19 months will do that to anybody. Before he got to that point, though, he battled through heavy uncertainty about his career.

“There was a point where I didn’t really feel like an athlete no more, kind of reconsidering my life,” he said. “It was like a crazy emotional roller coaster going up and down.”

When his acromioclavicular joint separated and needed surgery in June 2018, the third surgery of his career, he posted on Instagram saying these types of setbacks “either make you or break you.”

While the determination to recover and fight again always prevailed, the process didn’t come without its darker moments.

“The more I was alone, the more I felt like I was getting away and away from the game,” Gonzalez said.

The 29-year-old California-native said he had to surround himself with “the right crowd” to feed off their energy and positivity, and it especially paid off when he returned to training. Having not taken a break from training for about a decade, the injuries forced him to take a longer break than he had ever taken. Once he came back, he said getting back into the flow of things was “probably the hardest thing” he did, expressing thanks for his coaches to help him come along at the right pace.

“I guess it’s just instinct starts to come back, kick back in,” he said. “Just trying to put an easy schedule at first. Nothing too hard at first to burn myself out because then it’s like, ‘Oh, I can’t do it no more. I’m way too tired. I can’t believe I used to do this before so easily.’ Knowing just step-by-step kind of made it easier mentally.” 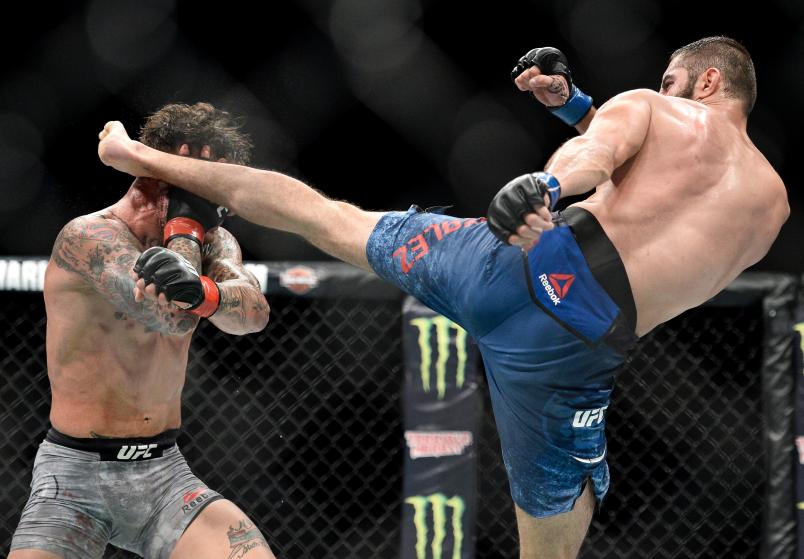 His welcoming party back to the Octagon comes in the form of UFC veteran Jim Miller, who is looking to regain some traction after losing five of his last six fights. In Gonzalez’s time off, he believes he became a smarter fighter, but that doesn’t mean his mentality in the cage has changed all too much.

“Go, go, go until something is done,” he said. “Kill or die killing, you know what I mean? I think I got a little smarter, maybe. Like I said, I got some better coaches, smart coaches. Coaches with patience, (which) is definitely what I need.”

When Gonzalez walks to the Octagon, it’ll complete a long, winding, up-and-down path back to fighting. When asked what will run through his mind as he strides to the cage, he doesn’t think he’ll have any other thoughts outside of taking care of business.

“I block everything out, just get in there, do my work,” he said. “Kill, kill, kill and see what happens. That’s about it.”

As long as his stomach isn’t grumbling, it’s hard to doubt Gonzalez is right about what will be a laser-focused headspace come fight night.