Gonzaga: Better the Second Time Around

"The fans should expect to see the best Gonzaga ever." - Gabriel Gonzaga 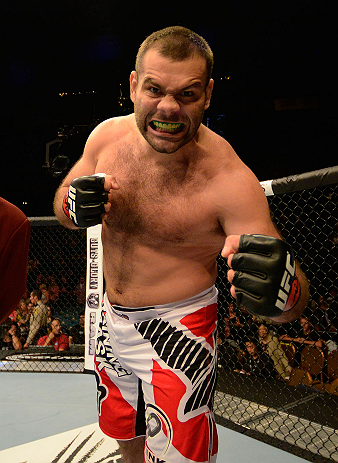 There was a collective groan in Manchester, England's M.E.N. Arena near the end of the first round of the heavyweight bout between Gabriel Gonzaga and Mirko Cro Cop in April of 2007, mainly because most fans believed that when referee Herb Dean stood the two fighters up after a dominant ground attack by Gonzaga, the Brazilian’s best chance of winning against the feared Croatian striker had gone by the wayside.

Gonzaga, the underdog against the former PRIDE star, could deal with the restart by Dean. What he couldn’t understand were the odds against him.

“I remember that I was the underdog and I didn't understand why,” he said. “In my head I was at the same level as him, but the odds were 7 to 1 in his favor.”

Those odds probably went even higher when Cro Cop was given another chance to implement his striking attack. But with a single kick to the head, Gonzaga CroCopped Cro Cop, producing a finish that was recently named the fourth greatest knockout in UFC history. It’s an honor Gonzaga is happy to receive.

“I thought it was amazing,” he said of his knockout’s placement on the all-time top 20 list. “Everyone wants to be recognized for doing a good job.”

More importantly, the win over Cro Cop, Gonzaga’s fourth straight since entering the Octagon in 2005, propelled him into a title shot against then-heavyweight champ Randy Couture. Gonzaga would lose that bout via TKO, and then dropped a second straight fight in his rematch with Fabricio Werdum. The Rio de Janeiro native would get back in the win column, but he only went 3-3 over his next six, with a UFC 121 loss to Brendan Schaub in October of 2010 earning him a release from the UFC.

Gonzaga, who now makes his home in Ludlow, Massachusetts, retired from MMA after the bout, but within six months, he had the itch to compete again. He won once on the local New England circuit, got invited back to the UFC in 2012, and he has since earned victories in five of his last six bouts. Now he’s ranked 12th in the heavyweight division, with a Saturday FOX bout against number eight-ranked Stipe Miocic likely to move him even higher with a win.

It’s been a remarkable return, and when you ask him to compare this title run with the aftermath of the first one, he says the difference is night and day.

“To be a good fighter you must have a lot of motivation,” he said. “I didn't have this after the Couture fight.  But after taking a little six month vacation I started to miss fighting and wanted to make a comeback.”

And what a comeback it’s been. In his last four UFC wins, Gonzaga has been the “Napao” of old, submitting Ednaldo Oliveira and Ben Rothwell and knocking out Dave Herman and Shawn Jordan. It was a far cry from his fight with Schaub, which marked the end of his first UFC stint.

“That fight was boring and was a bad moment in my career,” he said of the unanimous decision loss, the only time he has gone the distance in his nearly 11-year career. “I could not go out like that; boring is not my style.”

One-dimensional is not his style either, as the heavy-handed Brazilian Jiu-Jitsu black belt has the skills to not only submit you but knock you out as well. And though he’s been around a while, the 34-year-old is far from finished when it comes to the evolution of his style.

“I have put so much effort in improving at every aspect of the fight game,” he said. “I have been working on my stand-up, ground work and everything in between.”

Most fighters say that, but Gonzaga proves it on fight night. And while an April 2013 loss to Travis Browne snapped his win streak, his subsequent finishes of Herman and Jordan prove that he’s still a force to be reckoned with heading into this pivotal clash with Miocic.

“He is tall and fast, so I need be smart and watch out for his speed and reach,” said Gonzaga of his opponent. So does that mean a trip to the mat would be preferable for the Brazilian as opposed to a standup fight with the former Golden Gloves boxing champ? Not necessarily.

“I am going into the cage to fight and the fight always starts standing,” he said. “My experience will show and everyone will see what's gonna happen.”

If that’s a hint, it sounds like fireworks will heat up the United Center in Chicago on a cold Saturday night. But Gabriel Gonzaga is promising even more than that this weekend and in the rest of 2014.

“The fans should expect to see the best Gonzaga ever.”