Gomi Has Something Left in the Basement

While young to the rest of the world, when someone is 36 in the fight game, it can be accurate to call them an old lion. Takanori Gomi probably wouldn’t argue with that description, mainly because while an old lion in mixed martial arts likely doesn’t have another ten years left in the game, on the right night, he can still roar.

It’s what keeps the beloved former PRIDE champion in the sport, the idea that for 15 minutes or less, nothing else matters but testing himself against another world-class fighter.

“The most exciting part of this sport is that two fighters show the best of their ability,” Gomi said through translator / manager Mizuka Koike. “I purely love to fight. Showing 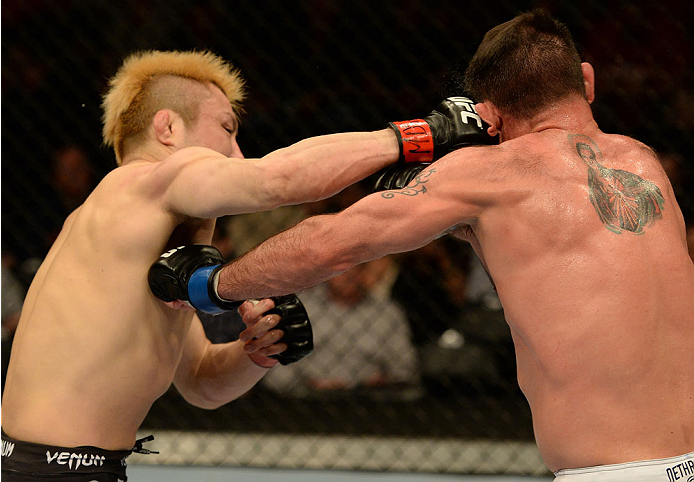 the result of my efforts to the world in the Octagon is something rewarding to me.”

This week, Gomi traveled from his home in Tokyo to the Windy City of Chicago to compete as a professional MMA fighter for the 47th time. On Saturday, it will be Joe Lauzon’s turn to throw hands with “The Fireball Kid,” who relishes such a result, but expects that the New Englander will have other ideas.

“I know he is strong on the ground,” Gomi said. “And I think his strength and submission techniques would give me hard time.”

That statement isn’t giving away anything the world doesn’t know already. Lauzon can handle himself on the feet, but why trade punches with a man who has ended 13 of his wins by knockout, two of them in the UFC, when you can take your chances with a man who has seen six of his ten pro losses end via submission? That’s the beauty of the sport, to see who can take the fight to where he is strongest, while his opponent shows what he has learned in the area most foreign to him.

That chess match has worked in Gomi’s favor for much of a career that began in 1998. If he kept it standing, more often than not, he won, especially in his prime years in PRIDE. In the UFC’s Octagon, which he entered in 2010, things have been a little more difficult, though he did win three of four leading into his September 2014 bout with Myles Jury. But in that fight, he was stopped for the first time, defeated by the very techniques that made him a superstar.

“I was lacking concentration,” Gomi said of the bout in Saitama Super Arena, home to some of his greatest victories. It might have been cause for some fighters to wonder whether it was time to hang them up. Gomi, confident that he still has gas left in the tank, knew he could still fight; he just needed to make some overdue changes.

“The loss made me realize that it is time for a change,” he said. “Not only in how I train, but also how I live as a person. I think the change helped me a lot to get over with the loss. Of course, my experience helped me, but I think putting myself into a new environment made me more focused on fighting than before.”

He gets to put that focus into action this Saturday, and while he can’t guarantee a win or even a quick turnaround for September’s UFC Japan show, he does promise a performance worthy of an old lion who still has some greatness left in him, or as the fictional Rocky Balboa put it, something left in the basement.

“No matter what the result will be,” he said. “I want to make people excited by watching my fight.”
>UFC FIGHT NIGHT: DILLASHAW VS. BARAO 2, 8PM/5PM ETPT.