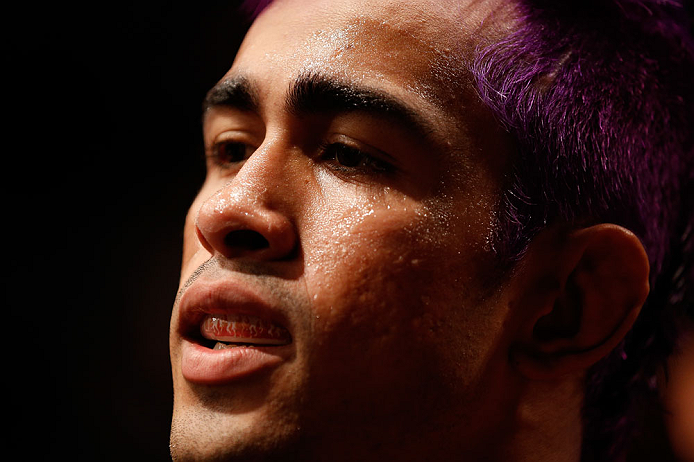 One of the best parts about the traveling UFC circus are the local fighters that often get showcased in the international shows abroad.  UFC Fight Night: Belfort vs. Henderson is no exception because there's a bevy of Brazilian fighters on tap looking to make an impact in front of a home country crowd.

There's also a laundry list of fighters from the United States hoping to travel to Brazil and beef up a woefully bad record that currently exists. American fighters have not had a tremendous amount of success, but can they turn the tables on the undercard this Saturday?

Leading the card is a battle of two former Ultimate Fighter competitors, as Godofredo Pepey takes on Sam Sicilia, while a couple of very interesting prospects will debut on the show with Adriano Martins taking on Daron Cruickshank while flyweight newcomer Dustin Ortiz takes on Jose Maria.

This fantasy preview will get you ready for the preliminary card with a few very tight matchups that could decide winning or losing in the UFC Pick ‘Em game for UFC Fight Night: Belfort vs. Henderson

Godofredo Pepey vs. Sam Sicilia (Tight matchup with an additional 120 points on the line)

Godofredo Pepey will hope to erase the bad memories of his last fight that ended in a TKO loss, and the same can be said of fellow Ultimate Fighter alum Sam Sicilia, who tries to bounce back after consecutive losses to Rony Jason and Maximo Blanco.  Don't let his last two fights fool you, however, because Sicilia is a very dangerous fighter who could easily end his losing streak with a win in Brazil.

What may make a difference in this fight is how Pepey adapts to the kind of pressure that Sicilia will put on him from bell to bell.  Sicilia can get a little out of control with his striking, but he's a dangerous fighter with knockout power in both hands and his feet.  Pepey has to know the best way he wins this fight is to get it to the ground, but Sicilia's been there before with some high level grapplers and lived to tell the story.

Sicilia also had to watch Pepey's last fight, where Felipe Arantes was able to overwhelm him early and just never let up on the gas. If Sicilia can do the same thing he could earn his second knockout since debuting in the UFC in 2012.

Thiago Tavares vs. Justin Salas (+175 bonus as a huge underdog)

Brazilian Thiago Tavares will also look to wash away some bad memories from his last fight when he takes on American fighter Justin Salas on Saturday night.  Salas is coming in off a win over recently retired fighter Aaron Riley, and he currently stacks up with a 2-1 record overall in the UFC, training out of Denver, Colorado.

This fight is a big step up in competition for Salas because while Tavares has never come close to touching the gold, he's always been a tough and durable lightweight contender.  Wins over names like Sam Stout and Spencer Fisher have proved that Tavares knows how to beat very experienced and tough veterans, and with a career that spans more than six years inside the Octagon, Tavares has seen and faced some of the best lightweights in the world.

Where Tavares excels is against the younger crop of fighters looking to make a name for themselves and that's where Salas fits in this matchup.  Tavares is a grappler by nature, but he's developed a very solid standup game.  Tavares has to be careful of Salas' power, because it's deceptive and can easily put his lights out.  But with the Brazilian crowd on his side and the kind of talent that could overwhelm a young fighter like Salas, it should be Tavares picking up the win in this one by decision.

Adriano Martins vs. Daron Cruickshank (+40 points for Martins since it's his UFC debut)

As previously mentioned, one of the best prospects to watch on this card is Brazilian Adriano Martins, who, despite his age (31), is actually a rookie at this level of the game for a number of reasons.  The biggest of which is the weight class — Martins now competes as a lightweight after previously fighting overseas at weights higher than 180 pounds on occasion.  As a lightweight, Martins is massive and will have a size advantage over many fighters on the roster not named Gleison Tibau.

Currently riding a five fight win streak, Martins is a versatile fighter with the capability of knocking out or submitting his opponents, although he does have a lot of decisions on his record.  Facing former Ultimate Fighter competitor Daron Cruickshank, Martins will have his hands full.  Cruickshank is more than willing to stand and trade with an opponent, and he's able to get creative with his arsenal of weapons as well.  Martins can fire back with just as much power, but he's had a tendency throughout his career of keeping his hands low.  He absolutely cannot do that against Cruickshank or bad things will happen.

If Martins plays it smart and doesn't toy around with Cruickshank's power, he should pull of a unanimous decision win by using better footwork, speed and technique on the feet.  If his hands start dropping, however, watch out, because Cruickshank can put his lights out.

Dustin Oritz vs. Jose Maria (+40 points for Ortiz since it's his UFC debut)

The other name to keep an eye on in this card is flyweight Dustin Ortiz, who makes his long awaited UFC debut against second time Octagon competitor Jose Maria.

Ortiz fought in the Tachi Palace promotion that once helped build a thriving flyweight division, and that's where he also suffered one of his only losses against current 125-pound contender Ian McCall.  Ortiz was probably a little too green to face a fighter like McCall that early in his career, but now with some seasoning under his belt he's ready for the big show.

It also doesn't hurt that Ortiz trains under legendary coach Duke Roufus and his team of assassins such as UFC lightweight champion Anthony Pettis, his younger brother Sergio Pettis, and a cast of top level teammates about a mile long.  Ortiz has fought under some bright lights already, having competed in Strikeforce and he's as tough as they come in the division.  His only losses have come by decision while he's finished eight out of his 11 opponents.

Maria is a 30-plus fight veteran who gave John Lineker a fight in his last bout before getting clipped and knocked out in the second round.  Unfortunately for Maria, he's facing another tough opponent this time around with stars in his eyes.  Ortiz will get some time to build himself into a contender at flyweight and this is a great first test.  His superior striking and takedown defense should frustrate Maria enough to make a few mistakes.  With it being his debut fight, Ortiz may fight a little more cautiously, so expect a unanimous decision win, but a victory nonetheless.