"We grew up knowing that nothing comes for free. You must fight for your dreams, and this environment makes you prepared for all of life’s battles." - Godofredo Pepey 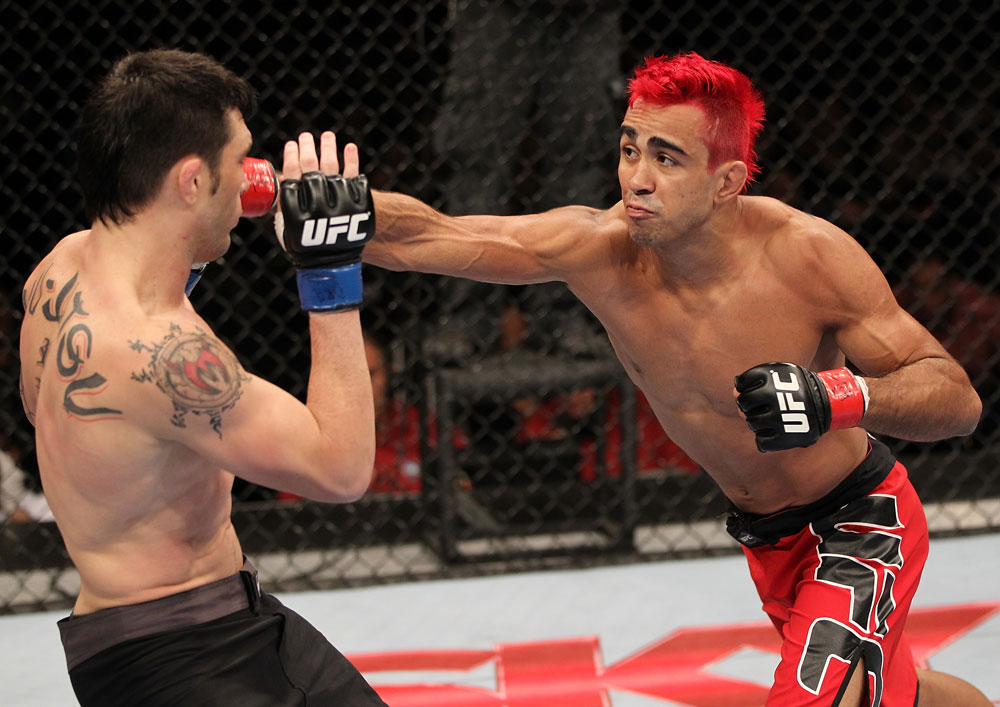 Rio de Janeiro and Curitiba are often the first two locations that come to mind when the topic of producing world-class mixed martial artists in Brazil is brought up, but over the years, Fortaleza has been the birthplace of several UFC fighters, including Thiago Alves, Wilson Gouveia, Jorge Gurgel, Hermes Franca, Marcus Aurelio, Diego Brandao, marking it as an MMA hotbed. The latest native of the city to make his way to the Octagon, featherweight Godofredo Pepey, isn’t about to dispute that distinction.

“We are brave, with strong wills,” said Pepey, through manager / translator Julio Heller, when asked what is it about Fortaleza that has seen it produce such talented fighters. “We have value for everything that we have in our life, and we grew up knowing that nothing comes for free. You must fight for your dreams, and this environment makes you prepared for all of life’s battles.”

It also doesn’t hurt to have a little guidance, and while many fighters looked to the standouts that came before them, both locally and throughout Brazil, Pepey didn’t need to look any further than his older brother Godofredo Claudio.

“I was hooked on the sport since the beginning,” he said. “My older brother started to train jiu-jitsu and always invited me to go with him. I loved the sport and saw that my career and my future would be in the sport. So I have a lot to thank my brother for.”

Since those early days, Pepey has proved to have a special talent for the sport, winning all eight of his pro fights (finishing each of his foes) before earning a spot on the first season of The Ultimate Fighter Brazil in 2012. From there, it was business as usual, as he defeated Johnny Goncalves, Wagner Campos, and Marcos Vinicius to stamp his ticket for the featherweight final against Rony Jason. But there, the string of success snapped, as Jason won a three round unanimous decision at UFC 147 last June and a UFC contract.

Now 9-1, the 25-year-old said that he got over his first defeat “Very quickly, very quickly,” and what helped in that process was the decision to leave his Fortaleza gym in the hands of his brother for three months and move 3000 kilometers from his home to a new training camp and team in Curitiba. He believes that it’s a decision that has already paid dividends.

“A game plan, and a team behind me thinking about alternative plans during the fight is something that I have now,” he said. “It’s amazing the difference from that time to now. I have a head coach, a jiu-jitsu coach, a great team of sparring partners, a manager, and so many professionals working with me and helping me to be a better fighter.”

Included is a coach he met on TUF Brazil, the renowned Andre Dida, and for the last three months, Pepey hasn’t just worked with his new squad of teammates, including another UFC on FX competitor in Francisco Trinaldo, but with two legends of the sport in Wanderlei Silva and Mauricio “Shogun” Rua.

“It was amazing,” said Pepey. “‘Massaranduba’ (Trinaldo) and me are lucky guys; we had the privilege to train with both legends Wanderlei Silva and Mauricio Shogun. Our camp was fantastic. Just a few days training with these guys and you start to understand the "feeling" of the sport, that it’s not only about money. These guys have been on the road for more than 10 years and they are still loving what they do. They accomplished so many things - belts, fame, money - but they still train harder than anyone. It is an honor and a privilege to share their experience, and they motivate me to keep pushing hard in my career. They are examples of lives dedicated to the sport, and this is an experience that I will take with me forever and I hope to have more opportunities to share more time with them.”

It’s always nice to hear the younger fighters in the game respecting and being in awe of the greats, and while Pepey is just beginning to follow in the footsteps of “The Axe Murderer” and “Shogun,” he already has a good start in developing the finishing instincts that they’ve mastered.

“Jiu-Jitsu is my background and where I have more experience,” said the BJJ black belt. “When I decided to move to Curitiba, I knew that my standup game would improve a lot, and that is something that I needed, because I know that the fans want to watch exciting fights and you must be prepared to face any situation in a fight, so I hope to keep winning and finishing my fights.”

This Saturday in Sao Paulo, he gets a second chance at winning his first UFC fight when he takes on grappling specialist Milton Vieira. Vieira debuted on the same UFC 147 card as Pepey did, and after a draw with Felipe Arantes, he’s looking to hit the Octagon win column for the first time as well. Yet despite his opponent’s edge in experience, Pepey is hungry to get his hand raised.

“He is an experienced fighter with fights in PRIDE and Strikeforce, and with his great jiu-jitsu he has my respect, but now is my moment,” he said. “I need this victory to prove that I can be in the UFC and I'm counting the days before the UFC in Sao Paulo. I came to the UFC to stay there. It is the best MMA event in the world, and I didn't reach the TUF final by accident. I'm sure about that and now is the time to prove it.”