The Goal Is Simple For Sean Strickland

Heading Into His First UFC Main Event, Rising Middleweight Sean Strickland Is After A Knockout Win Over Uriah Hall at UFC Fight Night: Hall vs Strickland
By Maddyn Johnstone-Thomas on Twitter, @MaddynThomas • Jul. 30, 2021

Sean Strickland just wants to beat people up and get paid.

Since returning to the middleweight division last October, Strickland has made his way into the top 15 and is reminding people why he was a threat in the division prior to his move down to welterweight. This weekend at UFC Fight Night, Strickland is ready to earn another statement win over Uriah Hall in order to continue his climb up the rankings.

“I think I’m one of the best fighters in the world and beating Uriah will show that,” Strickland said.

For the first time in his UFC career, Strickland is the headliner but, quite frankly, he doesn’t care about anything that comes along with it.

Prior to a motorcycle accident that put him out of the game for two years, he was active, constantly taking fights every couple months. Since returning to the Octagon, he has kept that same work rate. Two weeks separated his bouts against Jack Marshman and Brendan Allen last fall, both of which were victories.

Strickland has a different mindset on why he has remained so active throughout his career.

Even with a record of 18-0 at 185 pounds, this weekend’s matchup is a true test for Strickland. Being able to take down someone in the top 10 would likely put him right in the mix of the top 10, continuing his path to the belt. He knows what Hall brings to the table but, on the flip side, he also knows what he is capable of and the success he has had inside the Octagon.

Fourteen of Hall’s wins have come by knockout, while Strickland has recorded 10 wins by knockout, making it clear that this is going to be a battle between two competitors that like to take people out. 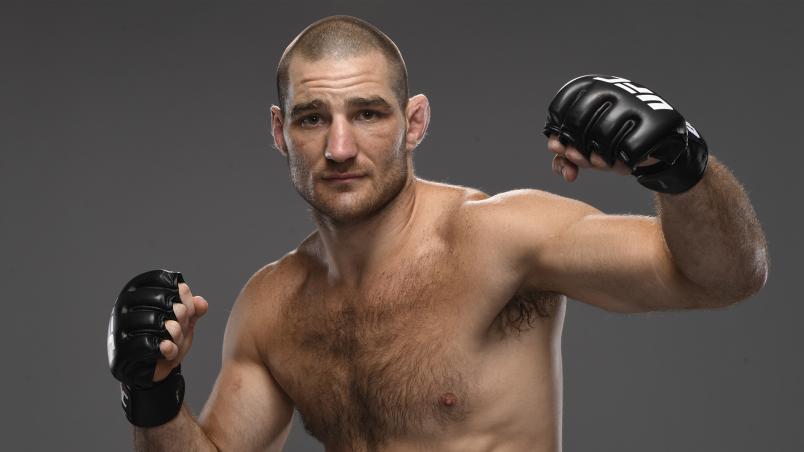 Sean Strickland poses for a portrait after his victory during the UFC Fight Night event at UFC APEX on May 01, 2021 in Las Vegas, Nevada. (Photo by Mike Roach/Zuffa LLC)

“You can’t watch Uriah and not be impressed,” Strickland said. “That guy has some of the coolest knockouts in the UFC. He’s a dangerous striker, he’s a guy that if you f*** up, you go to sleep, but so am I.”

Hall is no stranger to being on the big stage and taking fights into the later rounds and while this may only be Strickland’s second five-round fight his confidence only goes up as the fight goes on.

“I think it benefits me to go later,” Strickland said. “I think Uriah is one of those explosive guys where the first two rounds are the scariest. As it goes later, I don’t slow down. My pressure and my volume increases. So, it’s just trying not to get f***ing caught like every other fight.”

When he reflected on his time as a welterweight, he called it “miserable.” He hated the process of having to cut so much weight in order to fight smaller guys. Being in the middleweight division is where Strickland feels his best, and since his return there’s been nothing but success for him.

The 30-year-old has remained true to who he is and he lets it show. He doesn’t change his style and routine for anyone, like going into a camp with no direction and doing what he wants, which is usually sparring.

“If anybody knows me, they know that I try not to think, I don’t have a game plan,” Strickland said. “I just go in there and I’m me and if it works out, it works out and if it doesn’t, I’m going to wake up Sunday morning and say ‘f*** I should’ve thought about it more.’”

And while he wants to get the win on Saturday night, he isn’t naive to the possibility that it might not happen.

“I don’t know, I might not get my hand raised,” Strickland said. “I might get knocked the f*** out. This is why we are here, to find out.”