Go inside the Jones-Cormier rivalry 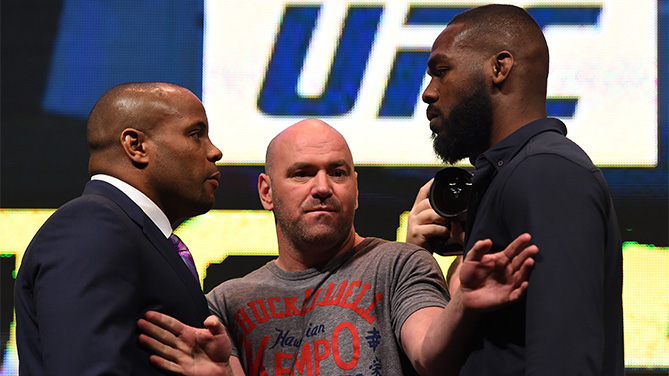 Jon Jones has always had a chip on his shoulder when it comes to fighting wrestlers. With Daniel Cormier, it’s a boulder, maybe two, resting on the frame of the former UFC light heavyweight champ.

In Jones’ mind, beating a decorated wrestler - whether it was Vladimir Matyushenko, Ryan Bader, Rashad Evans or Chael Sonnen - always meant something more. It was an invisible notch on his belt, a way of saying to the world “that could have been me.”

Winning on the NCAA Division I or international level on the mat is the only thing in athletics Jones didn’t accomplish, as family obligations forced him from college and into the world of pro mixed martial arts nearly a decade ago. Since then, he has gone from obscurity to phenom to champion to all-time great, with his stiffest rival only being the man in the mirror.

So when he returns to the Octagon on April 23 to face Cormier in the main event of UFC 197, he does so as an ex-champion, one who lost his belt to out of the Octagon legal issues, not the fists of the man who holds the belt now. That man, Cormier, already lost to Jones, being decisioned in a competitive, yet clear-cut, bout in January of 2015.

Since then, Cormier, a two-time Olympic wrestler for the United States, defeated Anthony Johnson for the vacant title, then successfully defended it with a win over Alexander Gustafsson in an instant classic. He’s the champion, a designation Jones takes issue with and that he voiced to Cormier during a recent interview conducted by Joe Rogan.

“So you’re the champ?” Cormier countered.

“So you can do anything you want and there are no repercussions?”

“That has nothing to do with what I’m talking about.”

“You lost the belt because of the things you did. They tie together.”

“You’re correct. I lost the belt, but you’re not the champion.”

“So then there’s no champion, because you’re not the champion.”

Neither raised their voice during the exchange, but the tension and animosity was evident. This, coming after a press conference brawl before their first fight, 25 minutes of combat, and even more verbal warfare since the summer of 2014. It’s not going away, and it’s only getting more intense. And if there are those who think it’s for show, there have been enough off-camera standoffs that prove otherwise.

“Some people think that we fabricate this stuff, that it’s made up for TV,” Cormier said. “Put Jon and I in the middle of an alley somewhere and we’ll fight.”

And at this point, this rivalry has nothing to do with who holds the light heavyweight championship belt.

“The animosity comes from me being alpha, and him really wanting to be alpha,” Jones told Rogan. “The truth is, he’s looking at his superior and he just can’t handle it.”

“You have lost your f**king mind,” Cormier laughed. 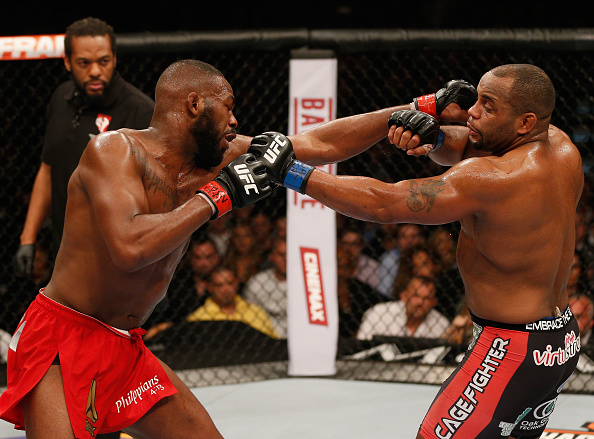 So where did it all start? The wrestler thing is a legit place to start, but Jones has never gotten into the whole “bad blood” thing with the majority of those aforementioned mat stars. It was more of a personal goal of his to beat wrestlers with more credentials than he had, and when that was done, it was done.

Even before the first bout with “DC,” Jones expected to win the fight on the feet, but he wasn’t afraid of getting into a wrestling match, and he ultimately won that battle, taking Cormier down three times. Cormier only hit on one of eight takedown attempts over the course of 25 minutes, and when that happened, Jones took over, something he predicted before the bout even took place.

“It’s not a wrestling match – this is a cage fight with knees, elbows, punches, and kicks,” he said. “It’s a lot more than wrestling, and I’m going to show him that.”

He did, yet the heat remained after the bout and has continued to simmer leading up to next month’s rematch. Following Jones’ out of the Octagon issues, the New York native has kept fans abreast of his progress when it comes to training and sobriety while tossing some subtle – and not so subtle – digs at his future opponent. Along the way, he’s become an anti-hero of sorts to many, capping off a recent press conference in Las Vegas with the chop made famous by the WWE’s D-Generation X faction.

The fans ate it up and roared, all the while tossing in plenty of boos for Cormier, the two-time Olympic representative of the United States who was stunned by the reception he was receiving.

“Boo me, that makes a lot of sense,” the Louisiana native said before explaining why Jones isn’t on his Christmas card list. “The reason I act differently around Jon is that one, competitively, I want to get the best of him. Outside of that, I don’t really agree with the entitled attitude that he puts off.”

Maybe that’s the core of it all. Cormier believes the public persona of Jones doesn’t match the one behind closed doors, so he wants to expose it, while Jones has been jabbed at by a veteran fighter who has no intentions of accepting his status as an all-time great or a defeat to him, now or ever. That’s real, and as cool as Jones has been at times over the last couple years when it comes to the topic of his rival, he admitted before their first fight that he’s not someone you want to get on the wrong side of.

“Some guys really got me angry,” Jones said. “Brandon Vera ended up with his face broken, Chael Sonnen ended up losing in the first round, Rashad Evans was completely humiliated with elbows repeatedly to the face. And Rampage Jackson is still complaining about the knee stuff I gave him years later. So not to toot my own horn, but yes, getting me angry definitely adds a great amount of inspiration.” 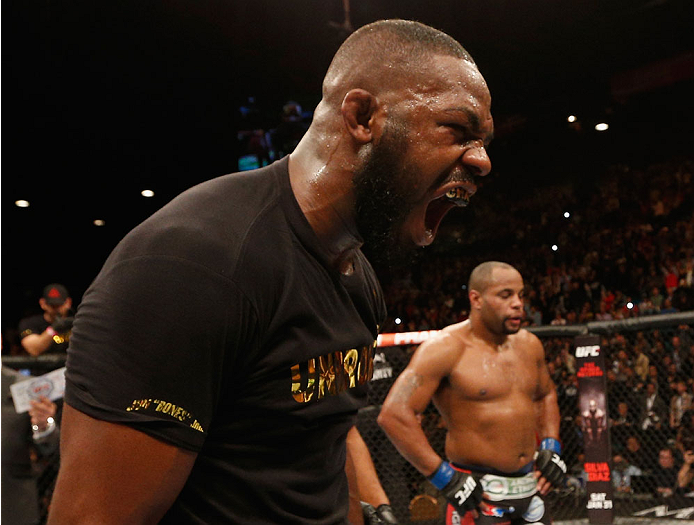 Cormier’s just as fired up to put his hands on Jones in a little over a month, possibly finishing off this series once and for all.

“I know you like to sit there on your high horse, but I am telling you right now, this is my life and I’m willing to die to beat you,” Cormier said, staring right at Jones, who returned the look and added his own mic-dropping retort.

“Be prepared to do that.”