Glover Teixeira: One Fight, One Title

"It’s my dream coming true, it’s right around the corner, and I’m coming after this dream with everything I’ve got." - Glover Teixeira 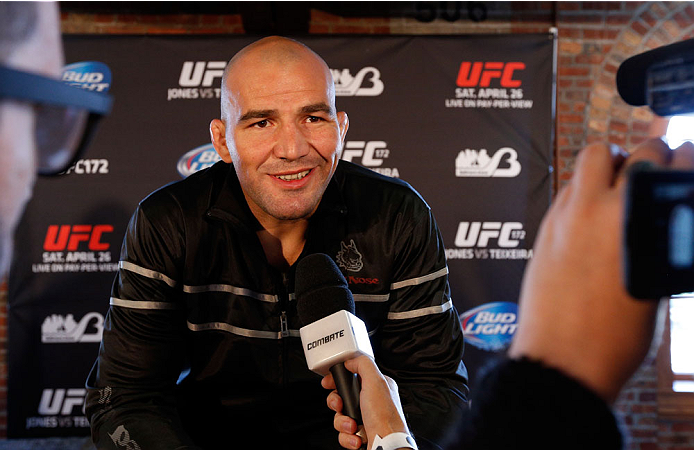 At this point in Jon Jones’ reign as UFC light heavyweight champion, many believe dethroning him is nothing short of impossible. But if his opponent this Saturday, Glover Teixeira, was able to get his longtime coach, mentor, and friend John Hackleman to travel from California to Florida for his training camp, maybe the Brazilian contender is a specialist in making the impossible possible.

“He (Hackleman) is a guy who’s been with me pretty much since the beginning in martial arts,” said the Sobralia native. “My first fight was against one of his guys and later on, he called me and told me that if I wanted to train with him, he could make me a better fighter. I didn’t know much then, and here we are. It was hard for him to come to Florida, but I think it was going to be harder for me to go out there (to California) because he doesn’t have many heavyweights and light heavyweights there anymore, so I asked him if he could come here. I didn’t think he wanted to say no to me, and I think he’s enjoying being here and being part of this camp.”

That camp in Coconut Creek is with the renowned American Top Team, a place that has become almost a second home for Teixeira, who lives with his family in Connecticut when not preparing for fights. Hackleman’s gym, The Pit, produced Hall of Famer Chuck Liddell and was the first fighting home for the challenger, and for the biggest fight of the 34-year-old’s career, it’s only fitting that his first coach is with him for the ride.

“I trust John, and he’s like a dad to me,” said Teixeira. “He’s the guy that started me in the sport, and he’s the master. Every other coach is great, and I have great coaches at American Top Team, so not to take away from them because it’s good to hear different opinions, but John is the guy that knows what I’m gonna do, how I’m gonna do it, and he taught me everything. He’s been with me for a long time, so I feel good with him.”

Teixeira also says that Hackleman keeps him balanced, knowing when to push and when to pull him back, a key heading into this bout because he admits that he’s overtrained in the past. This time, he can’t afford to leave any of his fight in the gym, and while some challengers have said that their first title bout was just another fight, Teixeira isn’t one of them.

“It’s definitely different,” he said. “This is it. That’s what I’m here for, that’s why I came to fight in the UFC. Everybody has that dream and this is it. It feels like closing the chapter of the book. And then after that, you have to think about defending the title and everything, but this is the dream, to be a world champion, and this is the most important fight I could ever have.”

Think about that for a second. Everything you’ve done for the last 12 years comes down to 25 minutes on Saturday night. Not many people in this world get an opportunity to fulfill a dream like Teixeira is getting, not on one night where one spectacular performance can change your life forever. If that’s not pressure, what is? But it’s not something that is affecting him in the least heading into this weekend.

“I don’t think of it in that way,” he said. “It motivates me. Of course the pressure’s there because it’s a title fight and I’m fighting one of the greatest fighters ever, but fighting for my dream is a motivation. It’s like every time I wake up in the morning, I say ‘man, I can’t believe this.’ Think about this, all my fights, I used to train for something else, and that’s the title shot. Now, this is it. One fight, one title.”

He’s certainly earned it. Unbeaten since 2006, Teixeira’s remarkable winning streak currently stands at 20. When he started that string of victories in May of 2006 with a first round TKO of Carlton Jones, the champion was 18 and had just won a junior college national wrestling title, with no thoughts of MMA in his head. Nearly eight years later, he’s the UFC’s 205-pound titleholder and the pound-for-pound king of the sport. But in his last bout against Alexander Gustafsson, he was pushed to the limit before taking a razor-thin decision. Some light heavyweights brought their daggers out, saying that Jones showed that he wasn’t invincible. Teixeira walked away saying he has even more respect for “Bones.”

“Everybody said he showed weakness in that fight,” said Teixeira. “No. Gustafsson’s no joke. Before the fight, I thought Gustafsson had the advantage standing up and Jon had better wrestling, but I was wrong. Jon Jones couldn’t take him down, but Jon showed a lot of heart. He kept coming back and he’s the true champion. I’m excited to fight this guy.”

Every challenger says that, but only a select few really relish the idea of fighting someone people think could go down in the books as the best ever. Teixeira is in that group. You can hear it in his voice that after years of waiting, his day is almost here.

“I can’t wait anymore,” he laughs. “This camp has been way too long, and I’m ready to go. I have no injuries, and I feel really great for this fight. It’s my dream coming true, it’s right around the corner, and I’m coming after this dream with everything I’ve got.”

Glover Teixeira may be the most determined man in the world right now, especially when you look at what it took to get here. He could have quit after going 2-2 in his first four pro bouts, could have walked away when visa issues kept him from competing against the best in the world in the UFC. But he didn’t.

“What could I do differently?” he asks. “Should I say I quit, and I give up? That would be no fun to tell my story to my grandkids one day.”

No, it wouldn’t. But this one sure will be.