"Sooner or later I’m gonna get that shot and when it comes, it’s the right time." - Glover Teixeira 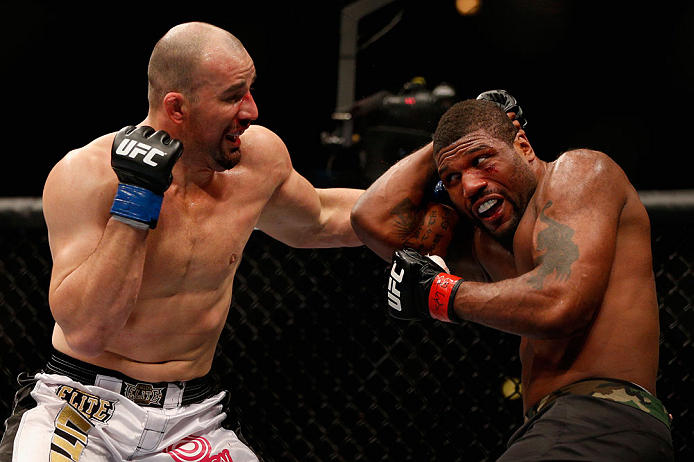 If not for visa issues that plagued his promising mixed martial arts career, Glover Teixeira likely would have been competing in the UFC Octagon years ago. Today, he might even be holding a world title. Instead, he’s 33 and making up for lost time as he prepares for his fourth fight in a year against James Te Huna this Saturday night.

Some might feel bitter about the lost time. Not Teixeira, who always felt that he would eventually get his chance to shine on the sport’s brightest stage.

“I was confident,” he said. “But I didn’t want to wait too long to get into the UFC. If I was 35 or 37 years old, I didn’t want to do that. But I knew that sooner or later this thing was gonna happen. I was gonna keep fighting no matter what and keep my record going up. They were going to have to call me because after having 30 or 40 winning fights, they’d have to at some point.”

It didn’t get to that point, but after a 2-2 start to a career that began in 2002, Teixeira ran off 15 consecutive wins, with the last four coming against UFC vets Marcio Cruz, Antonio Mendes, Marvin Eastman, and Ricco Rodriguez. In 2012, he got his call, and he hasn’t stopped impressing UFC fans yet, submitting Kyle Kingsbury, stopping Fabio Maldonado, and decisioning Quinton “Rampage” Jackson, with the latter victory coming on January’s FOX show in Chicago. That was the one that took Teixeira into America’s living rooms.

“Fighting him was great,” he said of the Jackson bout. “It was a hard fight and he’s definitely the biggest name, and it proved that I’m a top contender.”

Now that top contender, currently ranked fourth at 205 pounds, has entered the rarefied air where he not only fights for himself and his family, but where he becomes a representative of the sport. In recent months, Teixeira has spoken on gun control after the Sandy Hook tragedy in his adopted home state of Connecticut, and has also aided in the push to legalize MMA in the state, two topics on which he feels strongly about.

“It’s great for me because I’m saying something that I wanted to say and the UFC gave me the opportunity to put it out there,” said Teixeira, who lives in Danbury. “We talk about fighting in Connecticut and my friends and my family are there, and they go (to the fights) sometimes, but they can’t go all the time. I’m telling you, if I have a fight in Connecticut, I’ll probably have like 10,000 Brazilians there. (Laughs) They all know me in that town, and it’s gonna be great. So I love that I’m fighting for them.”

This Saturday, he’ll be fighting to keep moving up the light heavyweight ladder, and in front of him will be ultra-tough James Te Huna, who stepped in for the injured Ryan Bader. On a four fight winning streak, Te Huna is the kind of fighter Teixeira won’t have to look too hard to find when the bell rings, and if you think you’re excited to watch these two collide, the Brazilian is even more amped up.

“He’s a tough guy and I like this fight,” said Teixeira. “Quinton was the biggest name, but everyone was saying before that it looked like he didn’t want to fight anymore. He was in shape for the fight and I was happy about that, but he missed weight a fight before that and you’re thinking ‘is this guy focused, does he want to fight anymore?’ So if you beat the guy it’s kind of like, ‘whatever, he didn’t want to fight anyway.’ This guy (Te Huna) is good, he’s been winning, and he wants what I want. He wants to get a title shot and I know he’s focused. It’s gonna be a great fight, no doubt about that.”

To supplement work with his usual squad at The Pit, Teixeira moved down to Florida to train with American Top Team for this bout, and getting some new looks and more hard work has him more than ready for this weekend.

“I knew some guys over here and I knew Ricardo Liborio and Katel, he’s a Muay Thai trainer,” said Teixeira of his time with ATT. “I think they’re great trainers and a lot of guys train there as well, so I came here to train with the top fighters. “Bigfoot” Silva is gonna fight on the same card, and it’s a great team. I’m happy doing this stuff over here.”

More importantly, he’s happy to be fighting in the UFC, with fighting being the operative word. So if he wins on Saturday and the call goes up for him to get a shot at champion Jon Jones, that’s fine with him. Just don’t expect him to sit idle until that title fight comes.

“I love competing, and the UFC gave me such a great opportunity with four fights in one year,” he said. “The first time I fought in the UFC it was May 26th and May 25th I’m gonna have my fourth fight. It’s great and I would love to fight again soon. I don’t want to be waiting in line. I just want to keep fighting, and it’s the same thing as it was with the visa. Sooner or later I’m gonna get that shot and when it comes, it’s the right time.”