GLORY: Collision 2 Is A Clash Of Kings

The GLORY world heavyweight championship is on the line on Saturday as Rico Verhoeven takes on Badr Hari.
By JJ O&#039;Regan • Dec. 18, 2019

The two biggest names in heavyweight kickboxing throw down in a sold-out soccer stadium this Saturday - and the GLORY World Heavyweight Championship isn’t the only thing on the line.

To describe this Saturday’s rematch between Rico Verhoeven (55-10, 16 KOs) and Badr Hari  (106-13, 92 KOs) as the biggest fight in the history of kickboxing barely begins to do justice to what this contest represents.

If Marvel Comics sat down to design a pair of arch-rivals, they could hardly do better than clean-cut heavyweight champion Rico ‘The King of Kickboxing’ Verhoeven and his challenger Badr Hari, the sport’s crown prince of darkness.

The world heavyweight championship is being contested in the five-round fight, which headlines GLORY: COLLISION 2 at the sold-out Gelredome soccer stadium in Arnhem, Netherlands, this Saturday, December 21, but for many fans the belt is an almost secondary consideration next to the sheer stature of the reputations that both fighters are laying on the line.

After debuting as a fresh-faced youngster at GLORY 4 on New Year’s Eve, 2012, Verhoeven steadily climbed the ranks before having a breakout moment at GLORY 11 when he beat Gokhan Saki and Daniel Ghita in a four-man tournament. At GLORY 17 he won the world heavyweight championship and has dominated the division ever since.

In the course of his 17-fight GLORY win streak, Verhoeven has set and maintained numerous records. ‘Most Victories’, ‘Longest Win Streak’, ‘Most Title Defenses’ and ‘Longest Championship Reign’ are just some of them.

His professional accomplishments have combined with his upbeat, positive character to make him a sponsor’s dream. Samsung and Porsche are just two of the international brands he currently has deals with. 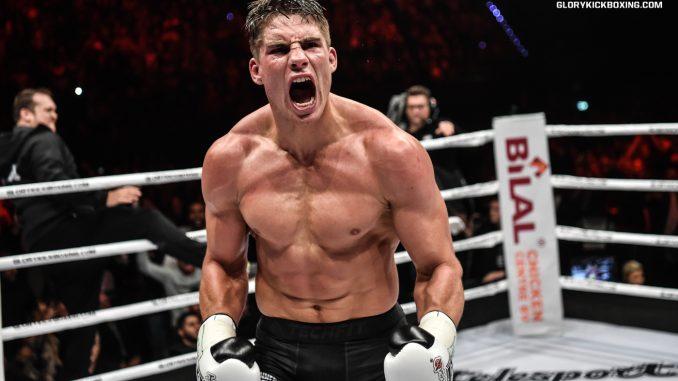 Hari, the former K-1 heavyweight champion and two-time K-1 World Grand Prix runner-up, holds records of his own, the crown jewel of which is the record for Highest KO Rate: with 87% of his wins by knockout (and 48% of those in the first round) he is by far the most proven finisher in the sport.

His stature in the sport is not rooted in records and statistics though. What draws people to Hari - fans and fellow fighters alike - is his aura. Since he first ventured into the professional ranks at just 18 years old, he’s carried with him a dark, brooding energy which draws the eye of everybody in the vicinity.

That energy at times has threatened to consume him, both personally and professionally. He’s spent time in jail as a result of letting that darkness loose outside the ring and one of his losses in the final of an eight-man K-1 World Grand Prix was for soccer-kicking the downed Remy Bonjasky and being disqualified as a result.

But that same energy is what makes him such a compelling figure. Hari is a fascinatingly complex individual: born in Amsterdam to parents who immigrated from Morocco - along with many of their countrymen - he was just seven when his father sent him to a kickboxing gym, guessing - correctly - that he would walk some mean streets and at times have the need to defend himself.

Encounter him today and, if you knew nothing of him, you might guess you were meeting somebody who worked in finance or business. Ferociously intelligent, Hari has absorbed every lesson that life has offered him on his travels. 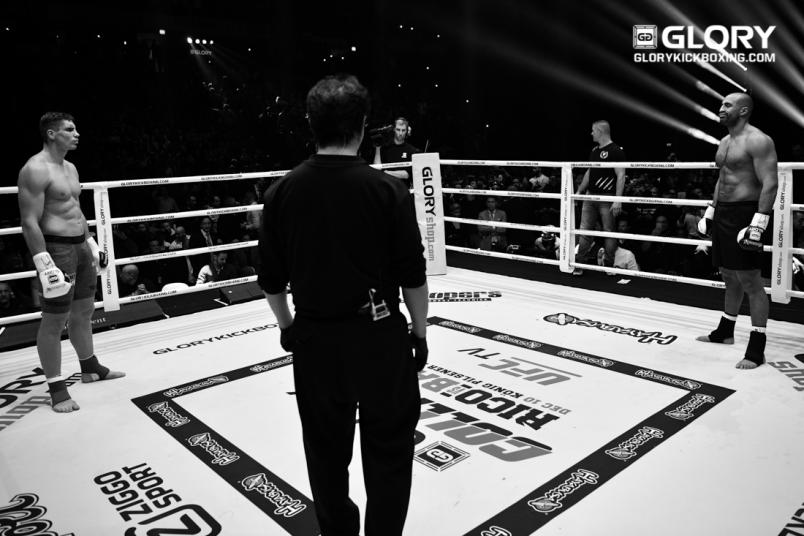 His career has taken him around the world, staying in the finest hotels and frequently working with lawyers, marketers and creatives. The street kid of yesteryear is the urbane sophisticate of today, though that dark energy still lies under the surface, ready to rise up when needed.

Verhoeven’s nickname - ‘The King of Kickboxing’ - is a direct descendant of his pre-championship nickname, ‘The Prince’, which was bestowed upon him by long-time coach Dennis Krauweel, who found the teenage Verhoeven so well-mannered and polite that he began referring to him as ‘Prince Charming’.

The nickname doesn’t sit well with Hari. In fact, he refuses to acknowledge it. When he was asked for his thoughts on it, prior to their 2016 fight, he seemed almost offended. “It’s… kind of a joke, actually,” he said, nonplussed. And that was his final word on the topic.

When Hari looks back on his career, he sees wars with a murderers’ row of all-time greats.   Hari faced and beat such luminaries as Peter Aerts, Semmy Schilt, Ray Sefo and Stefan Leko in their prime competition years. He argues that Verhoeven’s title reign has not been in the face of such stern opposition.

Interestingly, Verhoeven’s only GLORY loss is to Schilt, who took a decision over him at GLORY 4 in the 16-Man Heavyweight Tournament. Hari does have a loss to Schilt on his record as well, but he also has a record-setting win over him. Of all the big punchers Schilt faced in his career, only Hari was the one to knock him out. Not only that, he did it in under a minute.

Hari’s place among the all-time greats is beyond dispute. Only his exact place in that list is slightly less clear. A two-time finalist / runner-up in the K-1 World Grand Prix, his failure to win one ranks him under multi-time Grand Prix winners such as Peter Aerts, Schilt and Remy Bonjasky, though the blame for one of those Grand Prix Final defeats lies with his trademark volatility: he was disqualified after soccer kicking a downed Bonjasky. 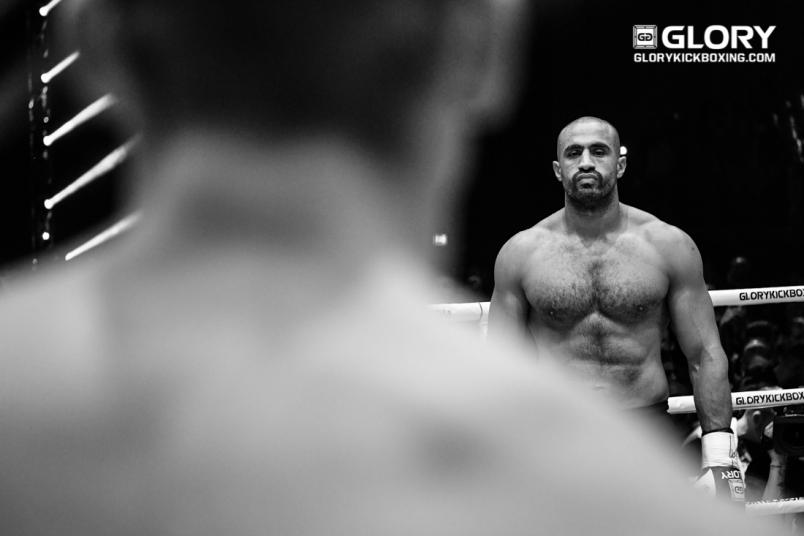 A mere three weeks later, Hari was back in Japan for a showdown with Alistair Overeem. Overeem inflicted a shock knockout defeat on Hari, who was still beaten up from the Grand Prix earlier that month. But Hari rematched him a year later and paid him back in kind, stopping him in just over two minutes.

Like Hari, Verhoeven is a figure of interesting contrasts. A behemoth of a man, at age 16 he was too big for teenage divisions in amateur kickboxing contests and had to fight grown men. He was still in high school when he knocked a 30-year-old opponent out in the ring.

The biggest man in almost any room he walks into, Verhoeven has a stern set to his jaw and carries muscle like armor-plating. He looks like an action-movie henchman, yet still has a boyishness to him which offsets those otherwise threatening characteristics. It’s hard to imagine Rico Verhoeven ever getting into a bar fight. In fact, it’s hard to imagine him being in a bar at all.

To his detractors, his wholesome nature is some sort of negative. They say he doesn’t seem like “a real fighter”. But either they aren’t looking hard enough or they don’t know what they are looking at. Verhoeven, like Hari, is consumed by a singular energy. But in his case it is focus - absolute, total unwavering focus, a pathological determination to be the absolute best he can be.

Spend a little time in Verhoeven’s company and you can feel that focus first hand. Everything he does is calibrated towards maintaining a state of competitive excellence, whether it’s eating, training or sleeping. As he once said, “Training camp begins right there on the breakfast plate every morning.”

Of course, there’s a fine line between dedication and obsession. That line is so far behind Verhoeven it’s disappeared over the horizon. Despite being the longest-reigning world champion in GLORY history and holder of multiple records, he still frequently has to be forcibly prevented from doing ab-roller sets on the living room floor when relaxing with his wife and three young children. 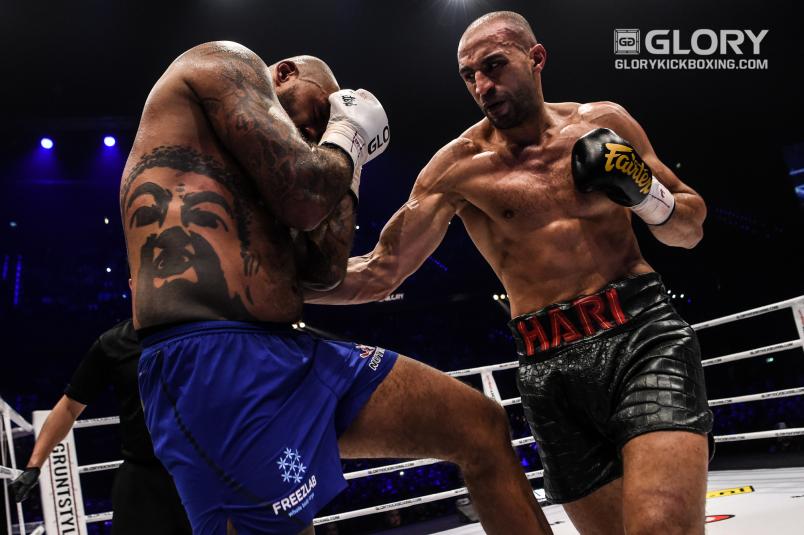 Verhoeven’s work ethic and commitment to sports science are what have set him apart from the herd. His training sessions are infamously intense and he once told Men’s Health magazine that he feels like he is “cheating” if he looks around and feels he is “not the hardest-working guy in the room”.

Fitness might be Verhoeven’s greatest weapon. His gas tank is limitless and he deliberately seeks to raise the pace later in the fight as a way of making his opponents break. His conditioning has always been the best in the division - but he may now at last have a challenger in that department.

Anyone who has followed Hari’s social media account over the past year will have seen the sheer physical hell he has been putting himself through and the results which have followed. He’s coming to the ring on December 21 prepared to go all-out for as long as it takes.

It’s tempting to look at the contest as “Old School vs New School,” given Hari’s long history in the sport, but that has to be qualified by noting that he was 18 when he entered the professional ranks and 21 when he began competing at the very top international level. At 35, Hari has some mileage and some battle scars but is not out of his physical prime and not significantly older than the 30-year-old Verhoeven.

The real subplot is how Verhoeven has taken the sport into the mainstream in the Netherlands and in the process attracted blue-chip sponsors and become friendly with the celebrity circuit and members of the Royal Family.

Such prominence was never afforded to the sport in years past; the Amsterdam street kid in Hari resents Verhoeven’s seat at the top table and wants to take it from him - not necessarily for his own accommodation, but just to deprive him of it.

At the same time, Hari’s own fanatic fanbase - the #BadrArmy - idolizes its hero to such an extent that a loss would be crushing to their morale. Like him, many of them are Dutch-Moroccans who came up in hard times. Their adulation fuels Hari but also brings pressure - the last thing he wants to do is let them down.

There’s an almost societal divide between the fan bases of the two fighters and that raises the contest beyond the sporting and into the realm of the symbolic. The two fighters are marching into battle looking to shatter the other’s myth - ideally by way of crushing knockout - and definitively put an end to an era.

In all ways - size, scale, importance, meaning - this is a fight which will own its own page in the history of fight sports. Only one of these fighters is bringing a belt to the ring, but figuratively both are wearing crowns. A king will fall this Saturday, December 21 - but which, and how?