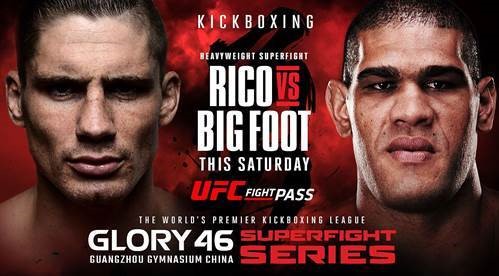 GLORY heavyweight champion Rico Verhoeven may be on top of the kickboxing world at the moment, but he knows that when the big men are throwing punches and kicks, anything can happen. So don’t expect him to be looking too closely at the MMA losing streak of his Saturday opponent, Antonio “Bigfoot” Silva.

“I take every fighter I fight seriously because every fighter has a chance, especially in the heavyweight division,” said the 28-year-old Dutchman. “One punch can be a knockout. For example, let’s take the Alistair Overeem-Bigfoot fight. Bigfoot gets outclassed for two rounds and then in the third round, Alistair gets fatigued, he gets a high kick and an uppercut and it’s over. That’s what the heavyweight game is, so you have to stay focused. You can’t slack at any moment because you can lose. In the heavyweight division, you just need one punch, one moment, one second.”

Those punches, moments and seconds haven’t affected Verhoeven too often, especially not in recent years. Winner of 13 of his last 14 bouts, the Netherlands native has the names Badr Hari, Daniel Ghita, Peter Aerts, Sergei Kharitonov and Gokhan Saki already dotting his record, and when approached with a bout in Guangzhou, China against a former UFC title challenger, he didn’t hesitate to sign on the dotted line.

“I was excited,” he said. “I love the fighting game and I love to fight new opponents. They brought Bigfoot to me and I said, ‘Why not, let’s do it.’ Everybody’s talking about his losing streak, and I wasn’t really aware of that. I just know his fights and he always comes to fight. He brings good fights, so I think it’s gonna be war Saturday.”

Despite his recent cold streak in MMA, the 38-year-old Brazilian does always show up to fight, and when someone has a record that includes victories over Overeem, Fedor Emelianenko, Travis Browne and Andrei Arlovski, he can’t be overlooked. But, at the same time, he will be entering the world of pro kickboxing for the first time and, as Verhoeven explains, it’s a whole new ballgame in GLORY.

“Striking in MMA is limited in that you can’t throw true combinations,” he said. “It’s difficult to throw full combinations. In kickboxing, you can throw combinations of four, five, six, seven. In MMA, it’s more single or double punches – a one, a one-two, maybe a one-two-three, but that’s about it because if you throw a one-two-three-four, they’re going to take you down. At that moment, your feet are planted to the ground, and that’s what your opponent wants. So I think that’s the key difference.”

That could be bad news for the Brazilian Jiu-Jitsu black belt, or good news if Silva is happy to not have to worry about wrestling or groundwork this weekend. Either way, he’s going to have an opponent in front of him who is still hungry and still motivated.

“So many good things are happening to me and so many doors are opening since I became champion and have been fighting more in front of bigger audiences,” Verhoeven said. “I enjoy that and I just want to bring kickboxing to a new level where it hasn’t been. I think in a few years, when I stop fighting, I want to be remembered as someone who brought kickboxing to a whole new level and brought a different perspective to the game. That’s what I’m working for and that’s what keeps me motivated. And of course, taking care of my family.”

Does that mean there isn’t a strategy in place for him to knock out a seasoned UFC veteran and then make that move to MMA, following the lead of his former opponent, Saki?

“I can honestly say it’s not a strategy to knock out Bigfoot and say, ‘Let’s jump into MMA now.’ I already did one professional MMA fight (in 2015) and it was fun, I enjoyed it, and who knows what the future holds. I’m the best in what I’m doing right now, so it would have to be really interesting to get me to jump into MMA.”