For the third time, GLORY kickboxing’s Superfight Series will be on UFC FIGHT PASS, and this Saturday it will be live from Copenhagen, Denmark. 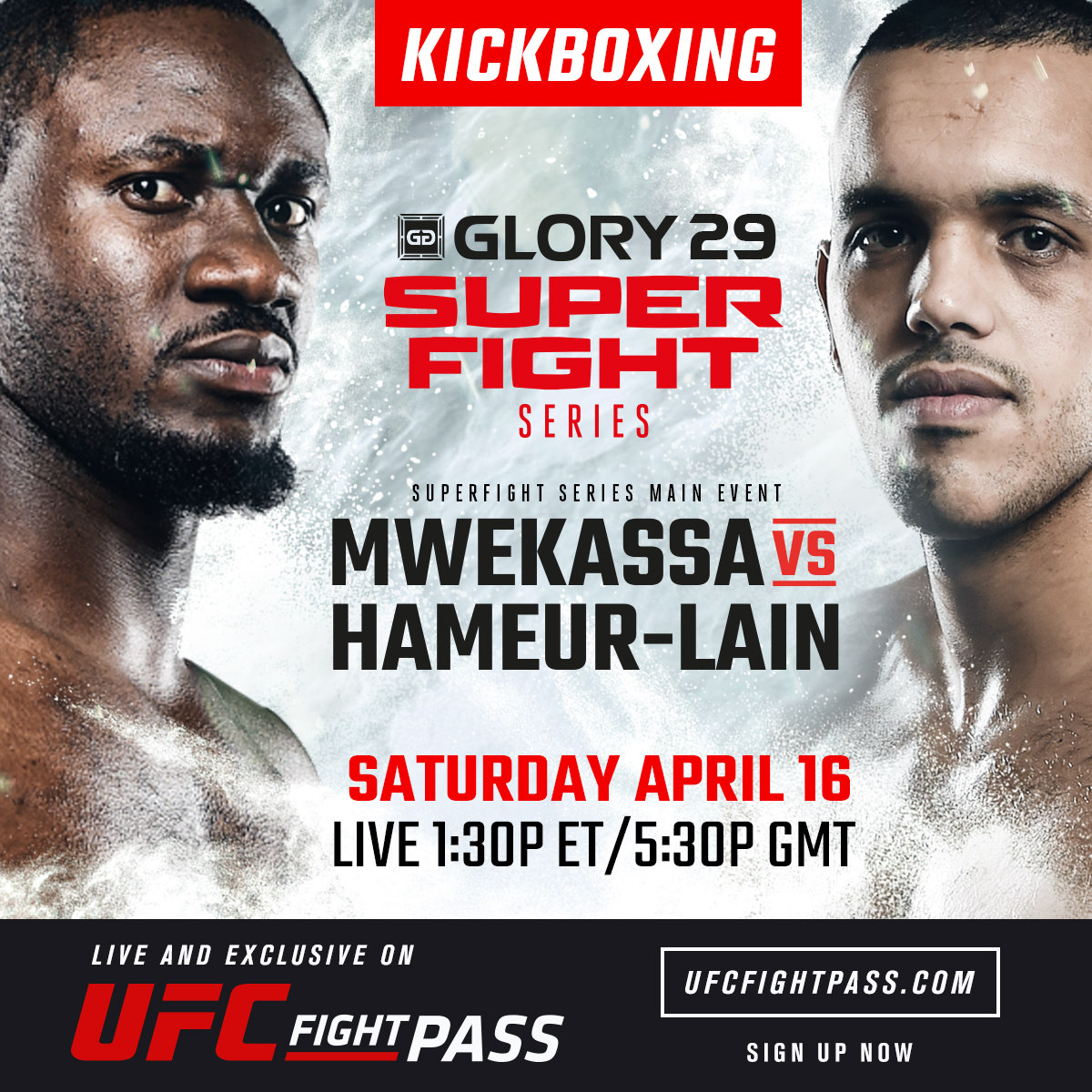 On April 16, GLORY 29 will kick off its five-fight event at 1:30 pm ET, only on UFC FIGHT PASS. From the Forum Copenhagen, fists and feet will fly in the GLORY ring as rising stars in the lightweight, welterweight, light heavyweight and heavyweight divisions will collide in exciting three-round bouts.

HARUT GRIGORIAN vs. MAXIMO SUAREZ - WELTERWEIGHT
It must not be easy having a wunderkind for a younger brother in the same sport you compete in, but that is the life of GLORY debutant Harut Grigorian, whose younger bro is the #5 ranked GLORY lightweight Marat Grigorian. At least they’re in different weight classes, right? The elder Grigorian is an accomplished kickboxer with a winning streak dating back three years. The one-time K-1 World MAX finalist, who has won his last four pro bouts by KO is, finally, making his first entrance into a GLORY ring as he tangles with “El Gladiator” Maximo Suarez. This will be the Spaniard’s GLORY debut as well after having lit the kickboxing world ablaze in K-1 rings with his knockout-friendly style for the past few years. Expect these two to look to make a name for themselves in this bout as the road to the top of this division can be quick, with current champ Nieky Holzken having cleaned most of it out while being scheduled to defend his belt against Yoann Kongolo later that evening.

RHASSAN MUHAREB vs. ABDOU KARIM CHORR - LIGHTWEIGHT
Nothing against the rising popularity of his younger opponent, but Denmark’s own Rhassan Muhareb is going to undoubtedly receive a hero’s welcome to the GLORY ring for the first time. Muhareb is a hard-nosed veteran, plain and simple. Having competed professionally in kickboxing for years upon years with Danish Muay Thai championships dating back to nearly a decade ago, Muhareb is aiming to steal the spotlight in his home country from the vibrant newcomer Abdou Karim Chorr. Trained at Sweden Top Team, Chorr has been busy winning just about every major kickboxing title in Sweden, including their national Muay Thai championship and K-1 championship. With this being Chorr’s debut in GLORY as well, it’s a familiar story, putting the up-and-comer against a highly-experienced older fighter to see what Chorr is made of. Who will come out on top as the irresistible force crashes into the immovable object?

JONATAN OLIVEIRA vs. MERAN ZANGAN - WELTERWEIGHT
In this clash at 170 pounds, Jonatan Oliveira will try to get back on the winning track inside the GLORY ring as he takes on promotional newcomer Meran Zangan. Brazil’s Oliveira earned back-to-back decision wins in GLORY, which seized him a spot in the top 10 rankings. In February 2015, Oliveira hit a speed bump in the form of top contender Raymond Daniels, who scored a TKO of Oliveira at GLORY 19. Now, the #8 ranked GLORY welterweight has something to prove as he meets debuting Swedish southpaw Zangan. Having competed in almost three times more pro kickboxing bouts than his opponent, Zangan is a multiple-time champion in his home country and trains alongside Abdou Karim Chorr with Sweden Top Team. This will be a difficult test for both fighters, as Oliveira wants to hold his place in the rankings against a more experienced opponent, and Zangan feels the pressure to make a name for himself in his new home.

CIHAD KEPENEK vs. TOMAS MOZNY - HEAVYWEIGHT
Like all GLORY events, the main card features a tournament, and in Copenhagen it’s a heavyweight tournament to determine the next challenger for current champ Rico Verhoeven. This clash between Turkey’s Cihad Kepenek and Slovakia’s Tomas Mozny is a reserve bout for said tourney. Regardless of that, these GLORY debutants have the opportunity to make a statement and get their name out there on UFC FIGHT PASS. While new to the GLORY ring, “The Giant Slovak” Mozny has become a huge name in his home country from winning titles around Europe and, maybe more so, from a famed spinning back kick KO the 6’8” Mozny scored whose video went viral. Tangling with the giant is Istanbul’s Kepenek, who has a similar amount of pro experience with a similar pro record as Mozny’s, but Kepenek boasts a vast number of amateur wins as well as having competed and won all over the world. Certainly Mozny’s the more famous prospect, but Kepenek could just as easily steal The Giant Slovak’s thunder with a big win.

In the UFC FIGHT PASS main event, Zack “The Black Warrior” Mwekassa returns to the GLORY ring for the first time since challenging for the light heavyweight belt as he takes on Zinedine Hamuer-Lain. The former world champion boxer turned kickboxer burst onto the GLORY scene with a knockout of UFC veteran Pat “HD” Barry at GLORY 16. Since then, the Congo’s heavy-handed Mwekassa has scored two more knockouts in the GLORY ring, but has tasted defeat twice to former GLORY light heavyweight champ Saulo Cavalari. Standing in The Black Warrior’s way is France’s Hamuer-Lain, who made his GLORY debut with a unanimous decision over Fred Sikking in December. Beyond the GLORY ring, Hamuer-Lain has over four times as many pro kickboxing bouts as Mwekassa. With a pro career dating back to 2006, Hamuer-Lain is a young veteran at only 29 years old, but he’s traveled the world as a pro kickboxer and has faced a who’s who list of talent. It’s an exciting matchup where Hamuer-Lain will aim to use his experience and technique to overwhelm Mwekassa, while The Black Warrior’s terrific power will aim to test the Algerian-Frenchman’s chin.