Gloria De Paula Gets Back To Her Roots

Strawweight Looks To Put Together Her First UFC Win Streak Saturday In Austin
By Steve Latrell, On Twitter @TheUFSteve • Jun. 16, 2022

After watching Ronda Rousey dramatically KO Bethe Correia at Rio’s UFC 190 event, Gloria de Paula, like so many fighters the world over, was inspired.

She would soon find herself at Brazil’s Chute Boxe in 2015 to train MMA. She turned pro in 2017 and made enough noise on Brazil’s regional scene to get a shot on Dana White’s Contender Series and secure her first UFC contract. Her entry into the promotion was a bumpy one, however, as she dropped her first two bouts to Jinh Yu Frey and Cheyanne Vlismas. It was the loss to Vlimas—a first round KO that lasted only a minute—that prompted her to go back to the drawing board.

“I focused on my striking style again and on my Muay Thai background,” she explains.

It was Muay Thai that was de Paula’s entry into the world of martial arts in the early pre-Chute Boxe days, and she credits her re-commitment to the discipline for her first UFC victory, a unanimous decision nod over Diana Belbita last February.

“Obviously, I trained all martial arts, but I decided to go back to my roots and I felt more like myself inside the Octagon. It was amazing to get my first win in the UFC. That motivated me even more for my next fight.” 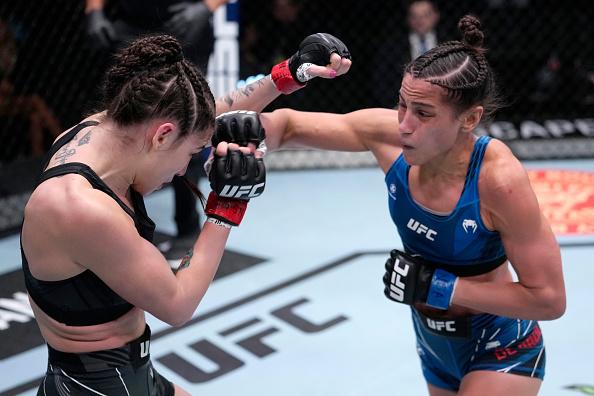 As she sits with UFC.com for a pre-fight interview ahead of that next fight --with Maria Oliveira Saturday at UFC Fight Night: Kattar vs Emmett--it’s visible in her breezy, lighthearted manner that a weight has been lifted off her shoulders. 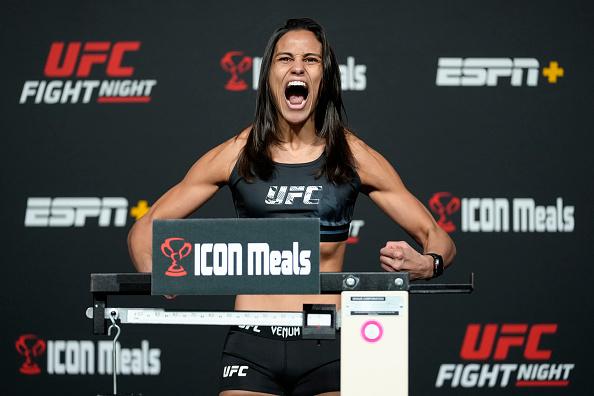 Gloria de Paula of Brazil poses on the scale during the UFC Fight Night weigh-in at UFC APEX on February 18, 2022 in Las Vegas, Nevada. (Photo by Jeff Bottari/Zuffa LLC)

She’s equally excited that the debuting Oliveira also comes from a strong Muay Thai background, and that their clash should reveal who is more evolved in the discipline to date.

“Maria is a great fighter, very experienced. I really like her striking game and also the fact that our styles match really well. I prefer [that we’re both Muay Thai-based] because she doesn't run from the fight…so the fight will flow better and we'll definitely steal the show on Saturday. I'm really focused on beating her in this fight and renewing my contract. I want to fight at least one more time this year.”

Winning her UFC contract on the 2020 season of DWCS, “Glorinha” began her career under the bright lights right in the iron grips of the COVID pandemic. As such, her four tilts in the Octagon have all taken place in the cozy confines of the UFC APEX. Saturday will mark her biggest audience to date when she walks out in front of a packed Moody Center in Austin, TX. Shows like this one increasingly signal a return to the normalcy of the “before times,” but de Paula is one of the rare personalities that was just fine with the smaller stage. 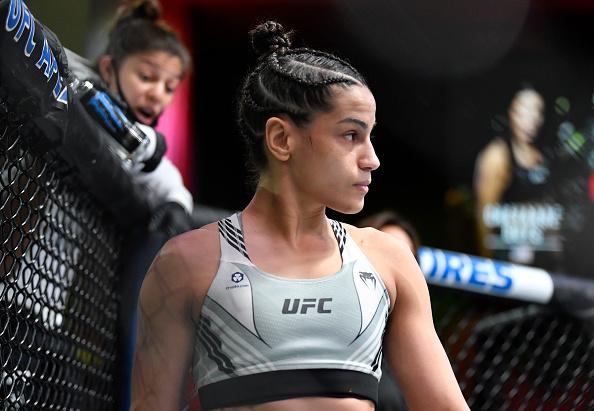 “It felt like home in Las Vegas,” she laughs, a little sheepishly. “I already knew how everything worked! But I'm really happy to fight in Texas with the crowd for the first time. I'm really excited.”

With her opponent making her debut, it would be more surprising if both fighters didn’t have at least a few nerves. But it’s a thrill she’s ready to normalize. As the UFC books more and more shows outside Las Vegas, she knows it’s only a matter of time before the opportunity will arise to fight back home in Brazil.

“Absolutely,” she says, exhaling the words in a way that convey the lifelong dream. “I'll be really excited to fight for my people.”