"I want to be knocking people out, just violent, vicious stuff, and wowing people. I know that will get me to the title a lot quicker."
By Thomas Gerbasi • Nov. 28, 2018

No one thought twice about it when Rick Glenn stepped in for Gilbert Melendez against Arnold Allen for a Friday fight on the TUF 28 Finale card. It was the same scenario when Allen was forced off the card due to injury as well and Kevin Aguilar was brought in to meet “The Gladiator.”

No one thought twice, especially not Glenn.

“I went from a lefty to a righty, but I’m glad they’re just putting a body in front of me,” he said. “I’m thankful they found a replacement pretty quick.”

At this point in his 12-year career, Glenn doesn’t get rattled by anything. So he also didn’t flinch knowing that he was going to be facing “The Angel of Death” this week in Las Vegas.

“No,” he laughed. “Everyone’s got their nicknames and I’ve seen all types of crazy ones. I like it.”

When he got the call that Aguilar was in for Allen, Glenn didn’t hit YouTube looking for footage on the Texas prospect. Again, it’s just not what a guy who describes his typical training day as “Get up, go hard, go home…repeat” does.

“My coaches will get on the video footage,” said the Team Alpha Male standout. “I didn’t watch footage on the other guy I was supposed to fight until a few weeks after I accepted the fight. I don’t focus too much on them; I’ve got to work on my weaknesses and keep my body healthy and try to peak at the right time to perform at the highest level and give the best performance I can give that night I’m fighting.”

So it’s safe to say he’s not hitting the refresh button on his computer every Wednesday night to see where he sits in the featherweight rankings?

“I’m not messing around with that,” Glenn said. “I’m just enjoying life and looking forward to fighting. I typically don’t think about the fight until I’m in the back locker room. I don’t want to put any more energy into it besides my training and preparation.” 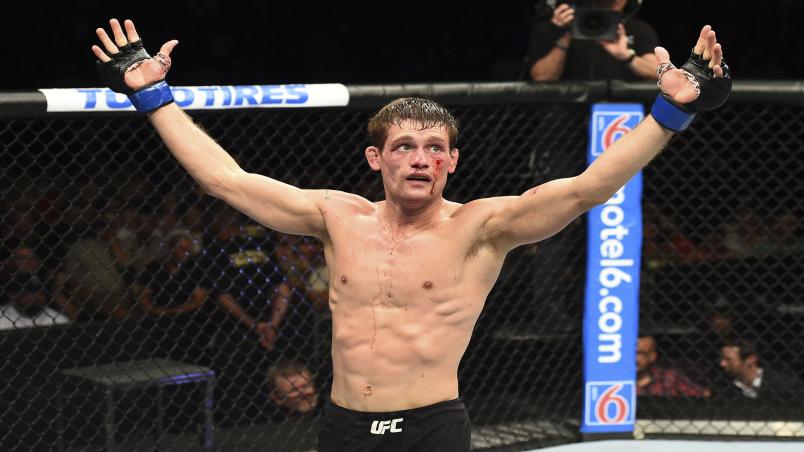 BOISE, ID - JULY 14: Rick Glenn reacts to his fight with Dennis Bermudez in their featherweight fight during the UFC Fight Night event inside CenturyLink Arena on July 14, 2018 in Boise, Idaho. (Photo by Josh Hedges/Zuffa LLC/Zuffa LLC via Getty Images)

BOISE, ID - JULY 14: Rick Glenn reacts to his fight with Dennis Bermudez in their featherweight fight during the UFC Fight Night event inside CenturyLink Arena on July 14, 2018 in Boise, Idaho. (Photo by Josh Hedges/Zuffa LLC/Zuffa LLC via Getty Images)

It’s the blue collar attitude you expect from a Midwest veteran, who is a lot more old school than his chronological age (29) might indicate. For him, the fame and glory of being a UFC fighter is cool, but he never loses sight on the reality that this is his job.

“It’s definitely my job,” the Iowa native said. “I pack my lunch when I’m coming into town for training and I’m here most of the day. In this career, anything can happen, so I don’t look at beating this opponent and then looking to the next one and the next one and possibly getting a title shot. It’s a wild sport and things change. You might not have a good performance, there are a lot of different variables, so I try to simplify it and kick ass.”

Glenn has that aspect covered, and since joining the UFC roster in 2016, he’s gone 3-2 with wins over Phillipe Nover, Gavin Tucker and Dennis Bermudez. It’s a solid start, and if he keeps getting his hand raised, he may have to start doing those MMA math equations and figure out when he could enter the title race at 145 pounds. But he feels that conversation is for another day, when he believes he’s showing the best Rick Glenn.

“I really thought about that stuff after my defeat to Myles Jury,” he said of his December 2017 decision loss, which snapped a two-fight winning streak. “I thought if I beat him, maybe a couple more fights and I could possibly be in title contention, and now, I don’t know. I haven’t performed like I know I can in all my UFC fights. I want to be knocking people out, just violent, vicious stuff, and wowing people. I know that will get me to the title a lot quicker. But as of now, I’ve got to put together some good performances, and I’m thinking a title shot is a couple years away, maybe longer. It’s a bunch of guesswork.”

Glenn doesn’t have time for that right now. The only thing he’s thinking about is beating Kevin Aguilar, and after that, he’s hopeful for a big 2019.

“Three fights would be nice, a gradual climb to the top ten by the end of 2019, and then get a top ten fight,” he said. “That’s realistic.”