Glenn focused on good vibes before his Boise showdown 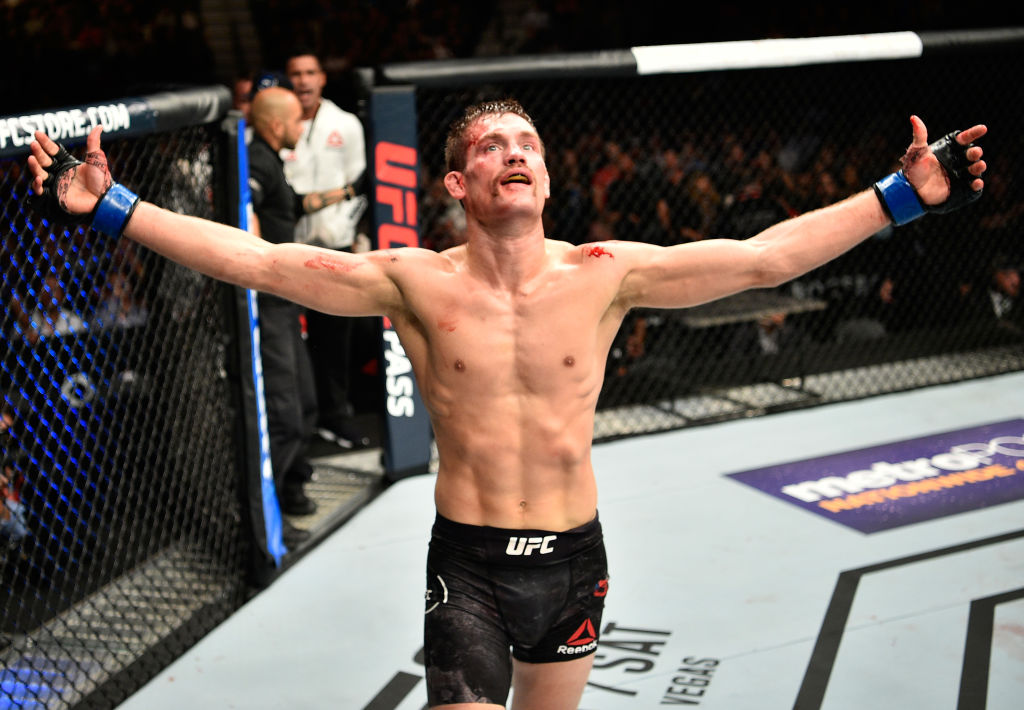 If you see a towel on the mat in a corner of the Ultimate Fitness gym in Sacramento, steer clear, because Rick Glenn is in town. And fellow UFC featherweight Darren Elkins is probably close by.

“We usually do take a corner spot so we’re not crashing into people,” said Glenn of the workout sessions the two Midwestern transplants have among the no-shirt crowd of Team Alpha Male. “I usually have my spot and an extra towel on the mat to clean up all the sweat so we’re not slipping and sliding. I’ve got plenty of clothes in my locker, a grocery bag for my wet, sloppy stuff, and I’m doing a wash of laundry every day.”

Oh, his poor wife, having to deal with this every day.

And Glenn loves her back. He also loves California, a far cry from Iowa and Wisconsin, the places where he grew up and learned about fighting and life. For him, it was a move that he needed to make to progress as a mixed martial artist, and it’s safe to say that Sacramento is home for him these days.

“It depends on the person, but it’s feeling pretty good,” he said. “There’s a lot of good energy out here, everyone’s pretty happy for the most part and there are a lot of up and comers. Just being in a martial arts gym itself is pretty rewarding because you’re around people who are striving for the same goal or to better themselves in general. I’m feeling pretty grateful and a lot happier. I’m really excited for the future with his team. Things are going really well.”

This week, Glenn is in Boise, Idaho, which has almost become a satellite branch of Ultimate Fitness considering that four members of the TAM squad are fighting on Saturday. Elkins, Chad Mendes, Sage Northcutt and Glenn will all take to the Octagon, with Glenn squaring off against perennial contender Dennis Bermudez. And while this is an individual sport, this weekend will undoubtedly be a reminder that it takes a team to get to fight night.

1st workout here in Bosie is the books. We're fired up and ready to rumble! @ufc #ufcboise @teamalphamalemma
A post shared by Rick Glenn (@gladiatormma) on Jul 10, 2018 at 10:10pm PDT

“I haven’t really had that experience quite yet with the team,” Glenn said. “So it’s pretty cool to have two of my main training partners – Chad and Darren – coming in as well. It’s cool to bounce stuff off each other and we’re all peaking at the same time. It’s interesting.”

With wins in two of his last three bouts, Glenn may also be peaking, and despite dropping a decision to Myles Jury last December, his previous victories over Philippe Nover and Gavin Tucker have him confident that the Bermudez fight will be a good one for him.

“I like the style matchup,” Glenn said. “He’s a grinder and he doesn’t typically run. He’s gonna come forward and bring the action, so I think we’re gonna be clashing and it’s gonna be an exciting fight for the fans. I’m really looking forward to it.”

So much so that when this interview was conducted on July 2, Glenn was getting a little antsy and had to be reminded to dial it back in the training room. That’s a good sign for Glenn, a 26-fight veteran who still hasn’t hit his 30th birthday yet.

He won’t hit that milestone until next April, yet he’s got plenty of experience that few of his 29-year-old peers don’t come close to matching. And that’s something nice to have in your back pocket.

“People starting out, they get so hung up on making sure they have the perfect fight camp and the perfect notice and timing and this and that,” said Glenn, who had his first fight when he was 17. “I had warmed up before fights within six feet of my opponent many times in the back of a barn. (Laughs) I had all kinds of crazy stuff – super shady promoters, small town hillbilly stuff, just wild stuff. I wish we would have captured a lot of the things that we had seen. I’ve got so many crazy stories. I need to write a book one day.”

Count me in for the Rick Glenn story. But in the meantime, there are fights to be fought, and the “old guy” at Ultimate Fitness is looking forward to all of them.

“It’s been a while,” he said of his life in MMA. “All the young guys here kind of tease me, so I guess I’m one of the older guys. But I grew up in the sport and I learned a lot, seen a lot. It’s been interesting, but I think it has helped.”