"It feels like it’s my second home inside the Octagon." - Gleison Tibau 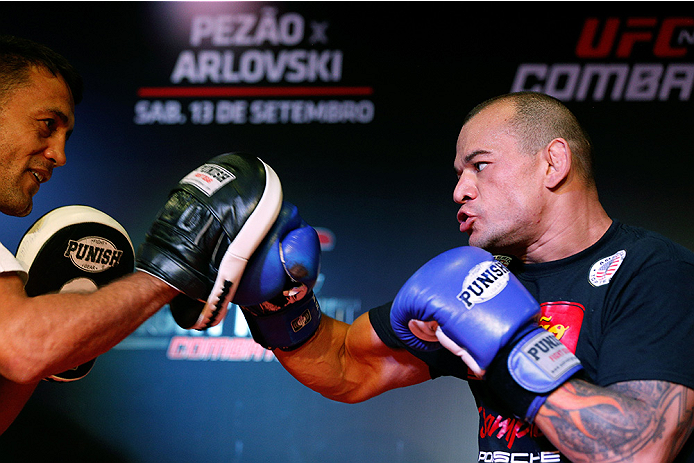 The baseball world is currently celebrating the career of New York Yankees captain Derek Jeter as he plays out his last season in pinstripes, and while the numbers he’s put up and championships he’s won certainly deserve much of the acclaim, what separates Jeter from so many of his peers are a couple things: class and a steady devotion to the job.

He never jumped from team to team, he didn’t fill up tabloid space with off the field debauchery or worse. Jeter showed up every day with the same team and went to work.

And while Gleison Tibau may not have the equivalent Hall of Fame numbers as a mixed martial artist – at least not yet – the 30-year-old from Rio Grande Norte, Brazil should receive his share of respect for his longevity and the way he carries himself. There’s no trash talking, no drama from the American Top Team representative. He just shows up and does his job, and while that’s a largely unappreciated art form these days, it doesn’t stop him from making his rounds.

“It comes from my parents,” Tibau said. “It’s the way they raised me. I don't feel the need to talk trash to anyone. I'd rather talk in the cage and save it for the fight. I want to show the younger kids that I'm a good role model and inspiration for what they can achieve.”

Saturday, Tibau enters the Octagon for the 23rd time, the 22nd as a lightweight, which is a UFC record for 155-pounders. The Brazilian also holds the record for most UFC wins at lightweight (14), a mark he can add to with a win over Poland’s Piotr Hallmann in the evening’s co-main event. It’s a remarkable run of longevity, especially in the UFC’s 155-pound shark tank, but when asked to explain his success, he says that he just likes to keep it simple.

“I love to train and I have good support from my team at American Top Team. I have good focus and a good support system here in Coconut Creek, so it all comes together for me and makes my job easy by letting me just concentrate on my fights.”

And by being in the UFC so long, Tibau has an experience edge on practically everyone he fights, especially someone like Hallmann, who is a talented prospect, but one who has less overall fights (17) than Tibau has in the UFC. It’s hard to climb that mountain on fight night.

“For sure my experience helps,” Tibau said. “It feels like it’s my second home inside the Octagon. (Laughs) He (Hallmann) is a big guy, but I'm really comfortable in all areas and I feel very prepared for this fight.”

Will a win move him closer to a world ranking and perhaps begin a run for a title shot though? It’s been something that’s eluded Tibau, who has put together separate UFC wins streaks of three over the years but has yet to threaten the reigning champion. Currently a winner in three of his last four, Tibau takes a wait and see attitude to such matters.

“I don't care much for rankings. I just focus on winning and moving up and fighting better opponents and making myself better.”

That’s the response you expect from the steadiest fighter in the lightweight division. No frills, no loud noises, just the thoughts of a working man. And who can’t get behind a guy like that?