"After seven years in the UFC, I’m ready. I’ve got a lot of experience, a lot of focus, and I’m hungry." - Gleison Tibau 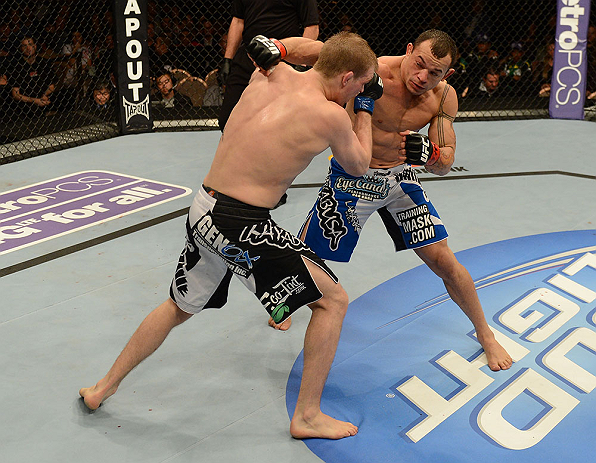 Gleison Tibau may not be a household name to UFC fans, but he should be. About to enter the Octagon for the 20th time on August 31 when he faces Jamie Varner at UFC 164 in Milwaukee, the Brazilian lightweight will become one of only 13 men in UFC history to reach such a milestone. And when you consider some of names on that list include four Hall of Famers (Chuck Liddell, Matt Hughes, Tito Ortiz, Randy Couture) and current greats Georges St-Pierre, BJ Penn, and Rich Franklin, that’s some pretty lofty company to be in. But for Tibau, there’s been no secret to reaching the 20 mark.

Getting a title shot at 155 pounds, where he has spent the majority of his UFC tenure, has been a little bit more difficult to pull off, and that’s something he hopes to rectify, starting with the Varner fight, which will pit him against a former WEC champion who has won two of three fights since returning to the Octagon in 2012, with the lone loss (to Joe Lauzon) resulting in a Fight of the Night bonus. It’s a major bout for the 29-year-old from Rio Grande Norte, and he knows it.

“Jamie Varner is a tough guy,” said Tibau. “He was a champion in the WEC, and it’s a good fight for me. With a big win over Jamie Varner, I’ll be closer to a fight for a title shot.”

If victorious, Tibau will have won two straight and three of his last four. Most recent was a second round submission of John Cholish in May that marked just his second fight in Brazil since 2007.

“Going back to fight for the UFC in Brazil, it was much better,” said Tibau, who also defeated Francisco Trinaldo in his home country at UFC 153 last October. “A lot of people were cheering and singing, and it was very nice. Seven years before, MMA was not popular, and now it is. Everybody watches the shows and talks about it, so it’s good.”

With all these milestones piling up: fighting in Brazil, getting ready for his 20th fight in the UFC, approaching seven total years in the organization, you get the feeling that Tibau is hitting his prime at the right time. And if he can get some consistency in his performances to where he can put together a nice winning streak like the one he had in 2011 when he beat Kurt Pellegrino, Rafaello Oliveira, and Rafael dos Anjos in consecutive fights, he may just be knocking on the door of a title shot by 2014. You don’t have to tell him that twice.

“After seven years in the UFC, I’m ready,” he said. “I’ve got a lot of experience, a lot of focus, and I’m hungry. This time is my time.”