The Glass is Always Half-Full for Clay Guida

"There’s no reason to mope around. Life’s too short for that." - Clay Guida 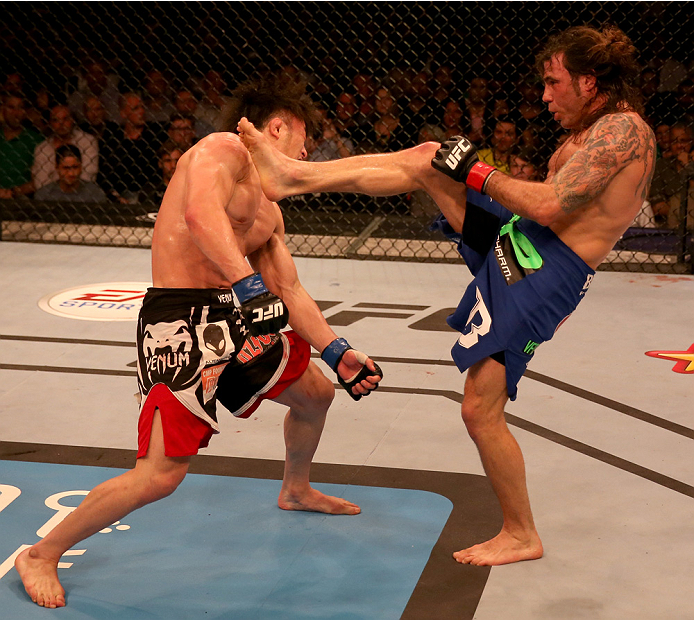 It was like old times again; Clay Guida putting it on an opponent, winning the bout, and then walking away with a Fight of the Night award.

He did all of the above in his April victory over Japanese veteran Tatsuya Kawajiri, picking up his second victory at featherweight, but his first post-fight bonus since a 2011 Fight of the Night against Benson Henderson. For a guy who had seven such bonuses on his resume, that was a long drought. So was all right in the Clay Guida universe after the win in Abu Dhabi?

“All is always great in the Clay Guida universe,” he laughs. “Even through some ups and downs, we always look at the bright side of life. It was awesome to get in there with such a great competitor like Kawajiri - who’s fought everybody - and put up what I wouldn’t call an impressive victory in my eyes, but a W. It would have been nice to get a knockout or a submission, but it was cool to have a fun grappling match for all the Abu Dhabi grappling fans out there. So it panned out well.”

The 32-year-old Illinois native may be judging his effort a bit too harshly, as this one was vintage Guida from start to finish, full of frantic scrambles and bursts of sustained action.

“It’s always fun,” he said, “but more importantly, it was good to bounce back after a loss against Chad Mendes and come out swinging and try some new things in the cage. It was good to get back to the old wrestling ways and fun grappling matches.”

“Fun” may be the operative word in the life of Guida. Sure, he takes his job seriously, but when he says all is well in his universe, he means it, because he is one of the most positive people you will ever run into.

“There’s no reason to mope around,” he said. “Life’s too short for that.”

Guida goes on to describe the recent filming of his segment of “The Road to the Octagon” series that previewed his Saturday bout with Dennis Bermudez. During his interview, he was told that the headliner of the FOX show, Robbie Lawler, said he couldn’t believe that he gets paid to fight as a job. Guida agreed with that sentiment, but with a disclaimer.

“I feel the same way, but the only thing different is that I don’t think of this as a job,” he said. “It’s a hobby, and luckily we get paid for it. We travel all over, it’s taken me from coast to coast and from one end of the world to the next. I’ve met some amazing people and built some great relationships, and for anyone in this sport or in this industry that thinks otherwise, maybe they expect too much or maybe they’re just not happy with right now and what they have surrounding them. And I’m always thankful for my family and my fans and my health, and the health of those around me. So I’m always in a pretty cheerful mood, even when it’s time to lose some weight. (Laughs)”

As this story is being written, Guida is losing some weight to get down to 146 pounds for his meeting with New York’s Bermudez, a young man on a six-fight winning streak and with all the ambition that goes along with it. Guida can relate to that attitude and to the aggressive style of “The Menace,” but he believes he has an extra gear on fight night.

“He’s a little sparkplug, man,” he said of Bermudez. “He’s got a gas tank on him, he hits from all angles, he moves forward and has that wrestling base, and he likes to push the pace. This is going to be a whirlwind and it’s going to come down to who wants it the most. Who’s going to look for a way out? I don’t know what a way out is. That’s not in my vocabulary, and I’m going to show him the door.”

How does the most positive person on the planet turn into such a terror when the Octagon gate closes? He laughs, but his positivity and his determination oddly come from the same place, going back to his high school and college years on the wrestling mat.

“I always wanted to be a State champion,” said Guida. “Unfortunately I never made it downstate to give myself that opportunity. In junior college I wanted to be a national qualifier and a national champion, and I just missed making it to nationals. There were just some things that I didn’t accomplish at a younger age that I’ve reevaluated and I’m making good on now. And becoming a world champion is top on my list.”

A longtime lightweight contender, Guida moved to featherweight in 2013, sandwiching wins over Hatsu Hioki and Tatsuya Kawajiri around the loss to Mendes last August. He’s not in the title conversation at 145 pounds right now, but a win over Bermudez could remedy that situation.

“We’ve had some tough ones,” mused Guida. “They (the UFC) don’t really ever give us any layups or any B-level fighters. I think they have a different road for us. They’re making us the road warriors, Mad Max, or whatever you want to call it, and that’s cool with me, because once we get there, it just makes it that much more special and I believe they have one or two guys that can take out Jose Aldo, and I know one of them is Clay Guida.”

That’s “The Carpenter,” always looking out for the bright side of life, win, lose or draw.

“It’s a long road,” he said. “You never really lose in this sport. If you’re a true champion and you’re a true competitor, you learn. There are no roadblocks in life; I believe there are speed bumps. Some are bigger than others, and it’s all about how you handle those.”