From Alaska to Seattle to Las Vegas to Missouri, Gina Mazany knows something about extremes. And while weather is one thing, those extremes can also be a metaphor for the things she goes through in the fight game, which means the only way to survive is by having balance.

And the 33-year-old flyweight has found it in Kansas City, where she lives and trains and goes about the business of being prizefighter. That means all aspects of that business. So when she suffered a loss at the hands of Priscila Cachoeira last May, she didn’t go to one extreme by walking away from the sport, or another by jumping right back into a fight immediately.

She landed somewhere right in the middle.

“Everyone wants to jump back in there, and, of course, that's what you want to do because you want to redeem your loss,” Mazany explains. “But, at the same time, I want to make sure I get ten times better just so I know that next time I'm in there, I'm prepared and ready for anything.”

Next time is fast approaching, as Mazany makes her eighth walk to the Octagon to face Shanna Young this Saturday. When you think of it in pure numeric terms, with seven of her 12 pro MMA fights taking place in the UFC, more than half of her career has been spent learning on the job at the elite level. Put like that, it’s not surprising that there have been some setbacks. So anytime she can get a nearly yearlong break, it’s almost welcome. But after a few months and things were clicking again, she made that call that she was ready for a fight.

“When I'm back to training twice a day and I feel good and I feel like I've checked off some of the boxes in my head that I wanted to get better at and I feel like I've improved on them,” she said when asked the moment when she believes she’s where she wants to be to get in a fistfight again. “The nice thing too is that when I get to that point, I'm like, all right, I've already improved, and when I'm in camp, I don't realize until I finish with a camp, but I get so much better when I'm in camp because I'm hyper focused and I obsess about things that I want to get better, so I made it a point to focus on the things that I just want to be great at. Just leveling up everywhere.”

And after her fiancé, flyweight contender Tim Elliott, scored a big win over Tagir Ulanbekov in March, that only amped Mazany up even more to make her return. Then again, in the Glory MMA gym in Lee’s Summit, it seems like there’s another teammate (or two, or three) competing and lifting the vibe in the room.

Now it’s Mazany’s turn, and while she will field endless questions about this being a “must win” fight considering that she’s 1-2 in her second stint in the UFC, don’t be surprised that it’s not fazing her in the slightest.

“I always feel like my back's up against the wall in a fight, but overall, our life is pretty amazing and awesome.” 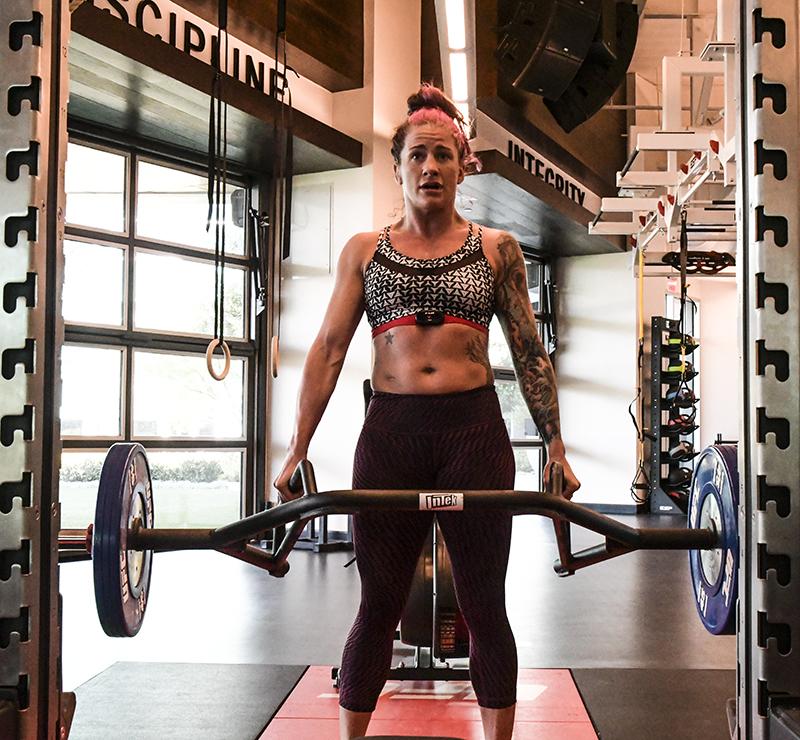 “I'm always gonna fight,” she said. “I'm gonna fight my ass off, no matter what. But am I gonna put extra pressure on myself? No, I'm not gonna put extra pressure on myself. It doesn't matter. What matters is how I perform. But one thing I do know is that if I fight my ass off and put on a helluva performance, there's a good chance I might even get a bonus. But I can't focus on the negatives and what could happen. I gotta focus on the positive of what could happen because if you manifest the good stuff, it's bound to happen.”

Maybe her mom said it best when she described her daughter as someone who always ends up smelling like a rose. In other words, no matter what happens, Gina Mazany will find a way to make things work. And for now, the only thing she’s focused on making work is her fight career. Everything else can wait because “Danger” has some hardware she’s chasing.

“I always end up making the best of a situation,” she said. “God forbid I lose this fight and get fired, I'm gonna figure something out. I've got plans, but the thing is, I haven't executed those plans because my plan is still to be a world champion. The goal stays the same. I'm gonna be the best athlete that I can possibly be, and when it comes the time when I have to hang 'em up, I'll hang 'em up. But I don't see that happening anytime soon. I really do think that my home is at 125 and I really do think that this is a good fight for me and that I'm gonna impress a lot of people.”