Gina Carano Q and A - UFCMag

Women’s MMA trailblazer and star of In the Blood, Gina Carano talks acting, fighting, and the possibility of a comeback. Get your subscription to UFC 360 magazine here!

“I get my adrenaline and my kicks off acting because it is so challenging.” -Gina Carano

A true pioneer of the fight game, Gina Carano put women’s MMA on the map. After compiling a 7–1 record, she unofficially walked away from the sport after a 2009 loss to Cris Cyborg in a bout for the Strikeforce women’s featherweight title. But Carano has not stayed idle, making a seamless transition to Hollywood with roles in Haywire and Fast & Furious 6. Now starring in the action-suspense film In The Blood, out April 4, she sat down with UFC 360 to talk about the film, her acting career, and whether she will ever put the gloves back on.

Tell the truth, you took this in the blood role to get a free trip to Puerto Rico.
No, I didn’t take it for that reason. [Laughs] I actually came across the script a couple years ago, and it was before I had even done Fast 6. I remember calling my agent and my manager and saying, “You know what, I really like this script a lot.” I actually made it through the script in one read, which says a lot for me. [Laughs] I loved it, and they put the wheels in motion.

How do you prepare for your In The Blood role, where there’s really no reference point for you to look at in terms of being a wife getting revenge against her husband’s abductors?
I do have kind of an emotional frame of reference in a different way. When I was growing up, I was extremely protective of my sisters. Ironically, they’re the ones who are more protective of me now with me being in the public eye. But I really used my older sister for that kind of feeling of protectiveness. And it was surprisingly so therapeutic. I understand what actors say now when they use an emotion to prepare, and it wasn’t hard for me at all. It was right there.

Do you need that kind of a connection to a script to want to be involved? 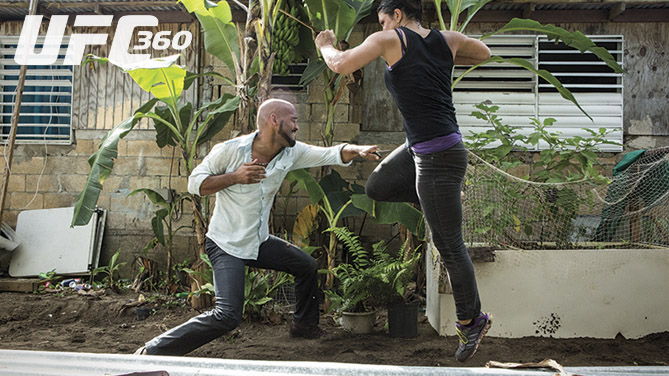 I prefer it. All the other things that I’ve done have been very straightforward, and you see me doing a ton of action, but what I really like about and what I’m really proud about from my performance in In The Blood is that you can see me emoting on screen, which I don’t think anybody has really seen before out of me. I understand that I get cast for the action and the physicality a lot—and I love that because I think being physical is a certain way of emoting also—but In The Blood is a piece of work I’m really proud of because people will get to see me in a completely different light. There’s still that action sense, but you can feel me, which is probably one of the best feelings—if not the best—when people can feel what you’re doing.

Do you watch films with a different perspective these days?
Absolutely. When I got my first job in Haywire, I didn’t know anything about film. I didn’t even look at the credits. Now I know the value of having a good cinematographer, of having a good director and people around you, and a good script. So I’ve really grown a lot in the first experiences that I’ve gotten. Sometimes I wish I could go back and say, “Let me try that all over again,” because until you’ve actually experienced what it’s like to get in the ring or perform on film, then you really don’t know what it’s like. And the more it happens, you get a little better at it.

Do you get a similar thrill from acting to the one you you did from fighting?
I do get my adrenaline and my kicks off acting because it is so challenging. It’s a completely different feeling of suppressing everything that you’re feeling in fighting, and then with acting, it’s getting all of it out emotionally so people can see what you’re feeling. So I’m really focused on the acting part of it, but I never put it (fighting) past me. I’m kind of that bipolar person where I don’t even know what I’m going to do sometimes, and I feel like that’s really good for the business that I’m pursuing. But if I’m working out or breaking a sweat, in my mind I’m fighting. 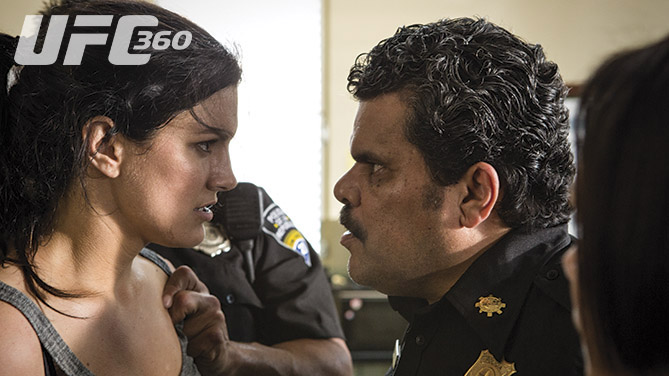 I get asked about Gina Carano a lot, and the most prominent question is, “Will she be coming back to fighting?” Are you coming back?
I still train. But there’s not a workout that I go through that I don’t think about it. I don’t know if that ever goes away or if one day I’m going to wake up and be, like, You know what, just go for it. I think one day I may be, No, that’s never gonna happen, and then I’ll know. But you never know with me. I do know that in order to be a fighter, especially now with the level of the females out there, you really have to be so dedicated to it and a hundred percent into it.

How did retiring from competition affect your training?
I love going in the gym and getting better and getting my first gi and learning so much more about jiu-jitsu and Muay Thai than I ever knew. I’ve really enjoyed just training and doing it for the love of learning. I’m more a fan of MMA than I’ve ever been now. And it makes me beam with pride when I see all these women succeeding, but there’s also that kind of desire, and I never got to make it to the big show. I was right there, and I had that conversation with Dana White, but I was fighting for Strikeforce, and I don’t know if I’m ever going to get to scratch that itch or not.

What goes through your mind when you see how women’s MMA has progressed?
It’s something I’m very proud of that I haven’t really expressed. I’m so proud of having come from MMA, and not only that, it completely changed my life. I look at these women and feel such a kinship to them. Going to the UFC fights, I remember sitting up in the last row and thinking, Someday, someday. And being able to watch other women experience that and doing it with such confidence, it’s really changed a lot. At one point, it was bad to be female and walk in a gym, and people don’t understand that. But now they’re all looking for the next female fighter that’s going to make it. Now little girls can put on gis at whatever age, and not having to see them struggle through what I kind of went through really has an emotional impact on me.

How does it feel to have made such an impact on the sport? 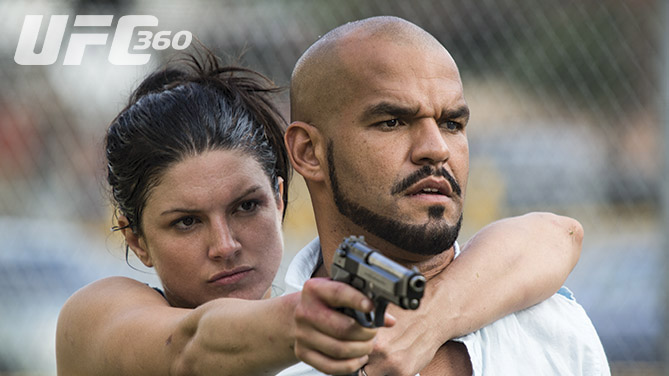 CREDIT: The new thriller In The Blood releases simultaneously in theaters, On Demand and on iTunes on April 4.