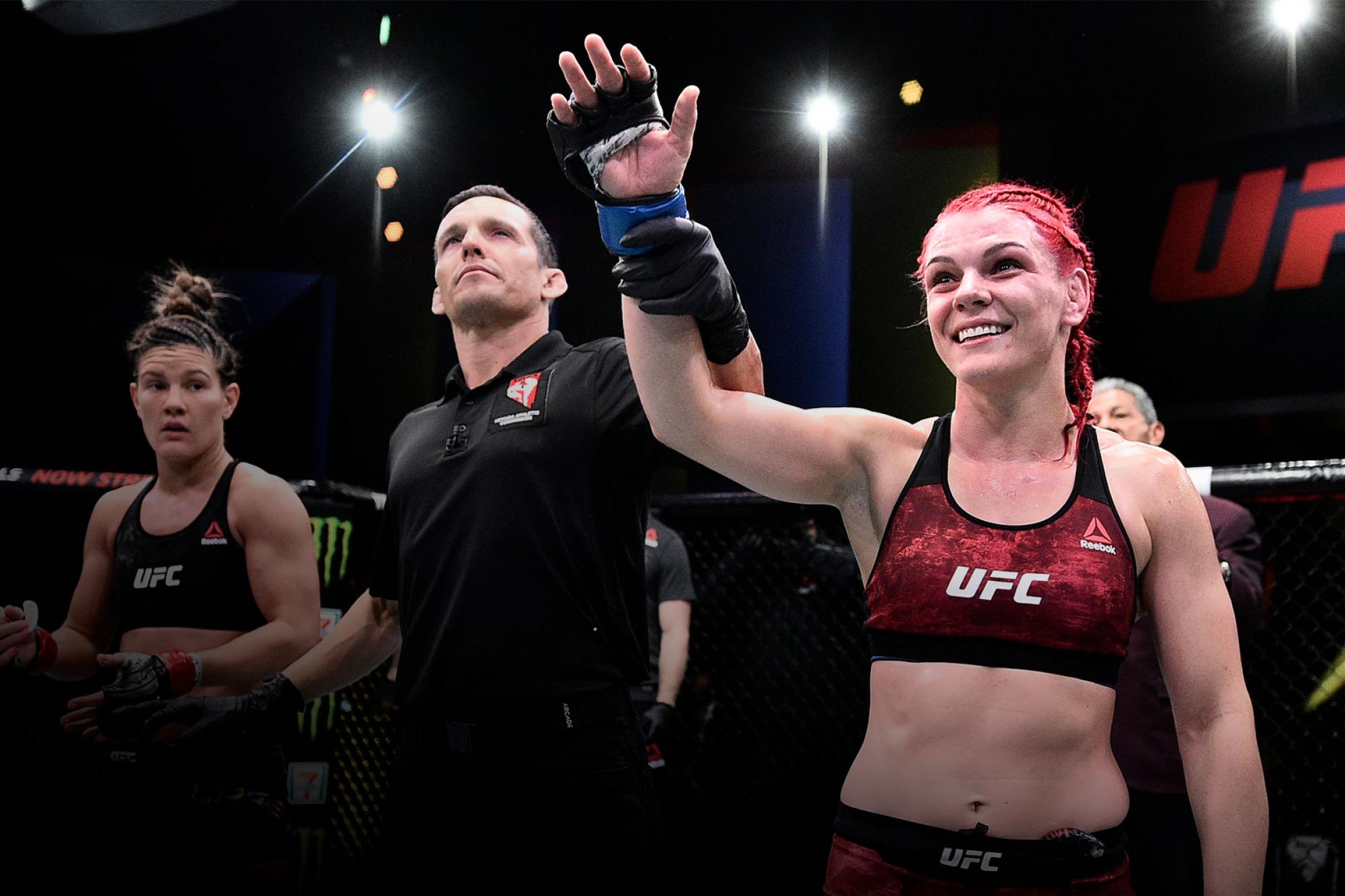 Gillian Robertson is looking to add to her historic submission record when she steps into the Octagon at Fight Island on Saturday
By Zac Pacleb, on Twitter: @ZacPacleb • Oct. 14, 2020

Gillian Robertson was well on her way to a unanimous decision win over Cortney Casey with about 40 seconds left in the fight, but when she heard her coach Din Thomas tell her there was plenty of time for a finish, “Savage” obliged. In a blink, the Canadian contender passed Casey’s guard and slipped in her patented rear naked choke somewhat out of nowhere. If you look closely, you can see Robertson smiling well before Casey tapped.

“No matter what, I’m always looking for the kill,” Robertson told UFC.com. “It just depends on how long it takes me to get there.”

The submission win was Robertson’s fourth, breaking a tie with Ronda Rousey and Rose Namajunas for most submission wins in women’s UFC history. It also kept Robertson’s perfect finishing record in the Octagon intact through five fights.

While holding those feats at just 25 years old is impressive, Robertson has her sights set on Charles Oliveira’s record of 14 submissions in the UFC.

“I’m not content with it,” Robertson said. “I’m trying to break records for guys and girls, and I’m nowhere near Charles Oliveira right now, so I have a long way to go.”

Order UFC 254 Khabib vs Gaethje For Any Device

The next step on Robertson’s UFC path brought her to Fight Island, where she faces Poliana Botelho this Saturday. Even though the fight is still yet to come, one could argue Robertson’s trip to Abu Dhabi is already a memorable one.

Arriving early with her coach Din Thomas, Robertson got a text from Thomas once the two were done with their mandatory 48-hour quarantine saying he had something for his pupil. Once Robertson arrived, Thomas started talking to her about the importance of legacy and how he believed Robertson helped carry his own. Thomas even went as far to say that Robertson reminds him of himself when he was a fighter making his way through the UFC. Finally, Thomas revealed the surprise: a black belt for Robertson.

“It was definitely unexpected,” Robertson said. “It means the world to me to finally have that respect from (Thomas). I’ve had so many people for the last two, three years since I’ve got my brown belt, they’re like, ‘Oh, you deserve the black belt. You deserve the black belt,’ but that meant nothing to me until I got that approval from Din. So, now that I finally have that, it feels real.”

Robertson said she played it cool while still in the room with Thomas, but as soon as she was back in the hotel hallways, the tears started coming. When she got to her own room, she looked to her phone to tell somebody, anybody, to share the good news with, but with the time change, nobody was really awake, and so Robertson just relished in the moment alone.

Take any time to talk to Robertson about her skills on the mat and she almost immediately refers to Thomas and his teaching. She followed Thomas when he amicably split from American Top Team, and Robertson said getting more one-on-one attention has paid off in spades, especially for the particular kind of MMA jiu-jitsu Thomas teaches. Robertson calls Thomas an “innovator” in MMA, adding or subtracting different wrinkles within grappling fundamentals that open up different opportunities, such as Robertson’s submission of Casey. While general consensus preaches “position over submission,” it’s not uncommon to see Robertson go for her rear naked choke without establishing her hooks.

“Din is innovating the game. It’s a lot of things that girls don’t even know yet. The way I set up my rear naked choke, it’s ahead of a lot of MMA fighters. They just don’t understand it, necessarily, so I’m able to slide it in really quick, and if you watch the video, I’m sitting there smiling when I have the choke in because the second I got it in, I knew it was deep and there was no defending it.”

Which brings things back to Robertson’s upcoming fight with Botelho. The Brazilian is 3-1 in the Octagon and has six knockouts on her professional record, and her striking is what stands out most to Robertson. That said, Robertson isn’t particularly impressed with the caliber of Botelho’s competition thus far.

“She’s just not on my level,” she said. “She hasn’t fought my level of competition. The girls she has fought either have losing records in the UFC, or they’ve been cut from the UFC. Any of the girls who have been of that caliber like Cynthia Calvillo finished her in the first round, so I’m expecting similar to Cynthia’s fight. Hopefully, I can finish it faster than her.”

With each foray into the Octagon, Robertson said she feels herself getting more comfortable in her striking and ground-and-pound. In fact, she wasn’t all too happy with her last performance despite its dominant nature. She was hoping to show off more of her skills as an “MMA fighter” instead of a jiu-jitsu specialist. A finish is a finish, though, and when it comes to submissions, Robertson is unmatched. When asked if there’s a submission she hopes to hit at some point in her career, she cited a leg lock from an Imanari Roll or a flying armbar but, at the end of the day, the rear naked choke is just “her thing.”

The flyweight division continues to deepen with talent, but it remains wide open with Valentina Shevchenko reigning over all. However, Robertson is keen on fighting every single person she needs to in order to move her way up the ladder. And in doing that, she’s hoping to add to her already established records in the Octagon en route to UFC gold.

“I’m here to keep on finishing,” she said. “I’m here to break records, so I’m just moving up. I believe to be the world champion, you have to be able to beat every single girl. If they put someone up against me, and I’m like, ‘Oh, I don’t know about that matchup,’ then I shouldn’t be going against the champ. I shouldn’t be moving up farther. I gotta fight every single girl on the way up.”