Gregor Gillespie hasn't been calling for high-ranked opponents, because the undefeated fighter knew his time to face one would come soon enough. That time is now.
By Thomas Gerbasi, on Twitter: @TGerbasi • Oct. 30, 2019

Gregor Gillespie is not the trash talking type. In fact, when it comes to whoever he meets in the Octagon, he has nothing to say – good, bad or indifferent. It’s just not his thing. But when the man he faces at UFC 244 in Madison Square Garden this Saturday – Kevin Lee – said that fighting “The Gift” would be anything but that, Gillespie couldn’t ignore it.

“I try not to think about anything my opponent’s talked about and I try to stay away from all of their interviews, but obviously everyone was tagging me in that one,” he said. “It’s flattering, but it still doesn’t change how I feel about the fight.”

Staying in the lane he’s always been in is the secret to Gillespie’s success in wrestling and now in mixed martial arts, where he’s compiled a perfect 13-0 record that includes six UFC wins that have put him in the lightweight top 15. And yeah, the No. 10-ranked Lee could have requested an easier foe for his return to 155 pounds, but he’s a fighter, just like Gillespie is. And for this fight, the Long Islander isn’t straying from what got him here.

“This is a step up in competition, but I’m treating it the same as every other fight I’ve ever had,” he said. “Training is the same, nothing has changed intensity-wise and it’s always the most important fight, whether it’s a guy who’s not ranked or a guy who is ranked. The training is literally the same it’s been since Day One. No one remembers what you did six fights ago. Your most recent fight is the one that they judge you on and it’s the most important fight of your career.”

That philosophy obviously helps when trying to get up for a fight against a lesser foe on the regional circuit, but in this case, it is the most important fight for someone who may not even have been here today if not for Jordan Burroughs. It was the idea of not being able to get by the Olympic and four-time World champion who prompted Gillespie to put his own Olympic dreams aside for MMA, begging the question, where would the former NCAA champion be if Burroughs never existed?

“I realized very quickly that Jordan Burroughs was gonna be the guy to own that spot for a long time and I was right,” said Gillespie. “He’s been the guy that’s represented the U.S. since 2011. So to get out of the sport was the right call on my end.

“But you can’t wrestle as long as you can fight, that’s a fact,” he continues. “And my career would be significantly shorter. I still wouldn’t be competing and if I was still competing, I would not be the guy that would be competing for a spot anymore. Not that I’m old, but for wrestling, 32 is definitely on the older end. You don’t see guys on the World team that are typically that old, and if they are, they’re at the tail-end of their career. Wrestling is different. You can’t wrestle as long as you can fight. In fighting, you definitely get more acute injuries; it’s not like someone getting worn away after years and years of someone pulling on your head and now all of a sudden you have a back problem. That’s something that’s 20 years in the making. And wrestling is just a totally different grind. So I doubt I would still be competing if I chose the wrestling route.” 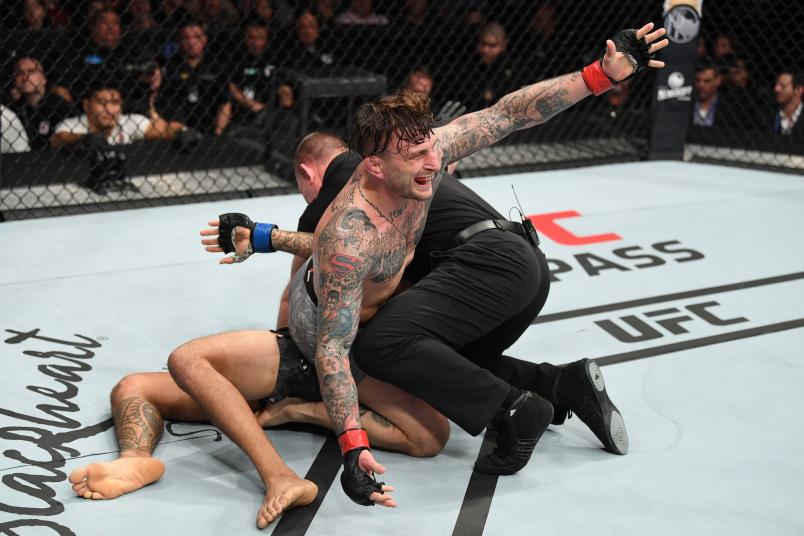 Gregor Gillespie celebrates his TKO victory over Yancy Medeiros in their lightweight bout during the UFC Fight Night event at the Barclays Center on January 19, 2019 in the Brooklyn borough of New York City. (Photo by Josh Hedges/Zuffa LLC via Getty)

Instead, Gillespie chose MMA, and he may be hitting his physical prime as he closes out his 2019 campaign this weekend. It’s been a good run thus far, but he admits that it doesn’t feel like three years since he started wearing gloves with the UFC letters on them.

“No, it doesn’t,” he said. “I was just thinking about my Pittsburgh fight (against Jason Gonzalez), which was two Septembers ago. My brother got married two weeks after that fight, and it’s incredible to think it’s been two years since then. I also remember my buddy Adam (Kownacki), he’s a heavyweight boxer here and he’s probably gonna have a belt pretty soon, he was making fun of me because I hadn’t broken into double-digit wins yet. And that seems like it was not that long ago.”

Gillespie hit that double-digit mark with his Fight of the Night submission of Gonzalez, and three more victories have followed, putting him in a perfect spot heading into his showdown with Lee. It’s a reminder that sometimes you can make it by going against the grain. But then again, Gillespie has often been ahead of the curve on many things. I remind him that as the world has gotten on board with retired U.S. Navy SEAL David Goggins, he’s been living that life for a while. 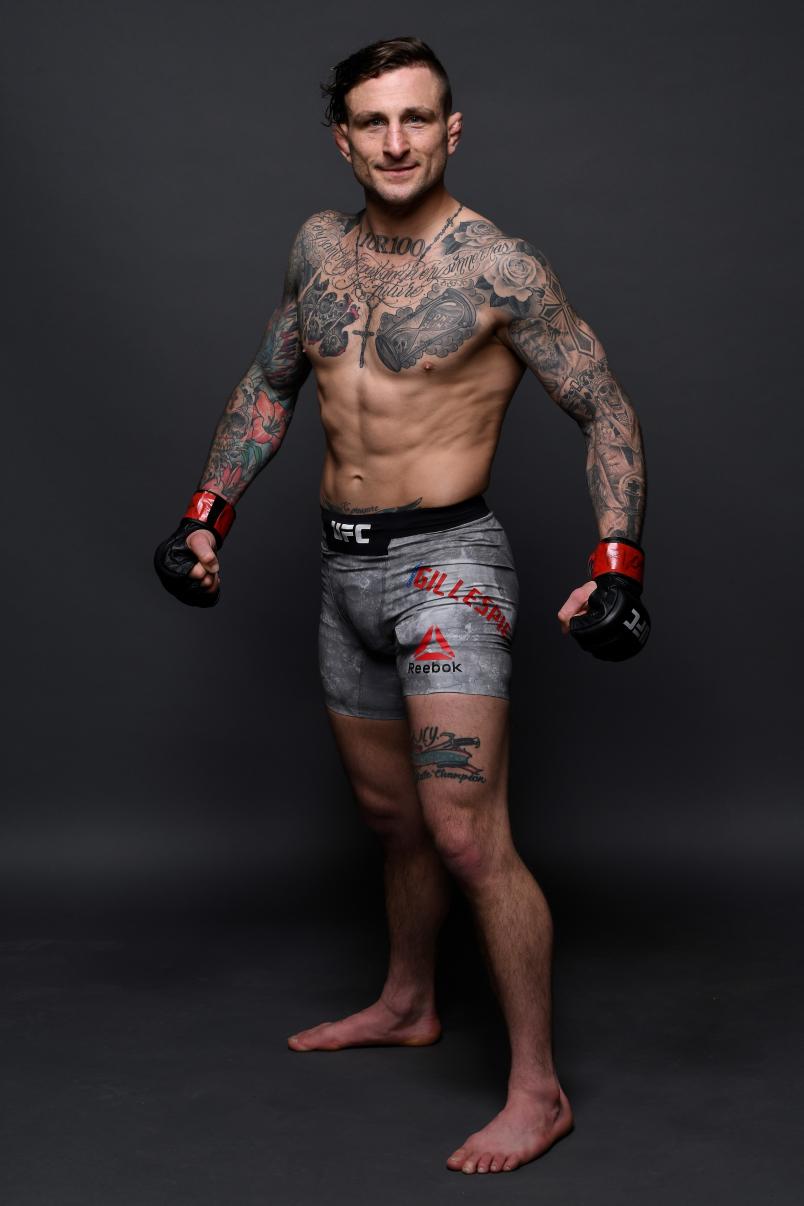 Gregor Gillespie poses for a portrait backstage during the UFC Fight Night event at the Barclays Center on January 19, 2019 in the Brooklyn borough of New York City. (Photo by Mike Roach/Zuffa LLC via Getty Images)

“He’s a maniac,” laughs Gillespie. “I’ve been living a modified version of that life, though. David Goggins does hundred-mile runs, I can’t do that. But the mentality is the same and that’s been my whole career. People say, ‘He does too much, he eats too clean,’ There have been several trends that I was way ahead of that now I look back and say to myself, ‘You guys all thought I was crazy.’ (Laughs) But I’ve been doing that since I decided that I was gonna fight.”

And here he is, the guy no one wants to fight, but that everyone may eventually have to.

“At this level, you’re going to be fighting all good guys,” Gillespie said. “What’s the difference between fighting me and fighting another good guy?”