"I think the best compliment is respect and for people to call me a warrior; not a winner, but a warrior. That's more important for me." - Gilbert Melendez 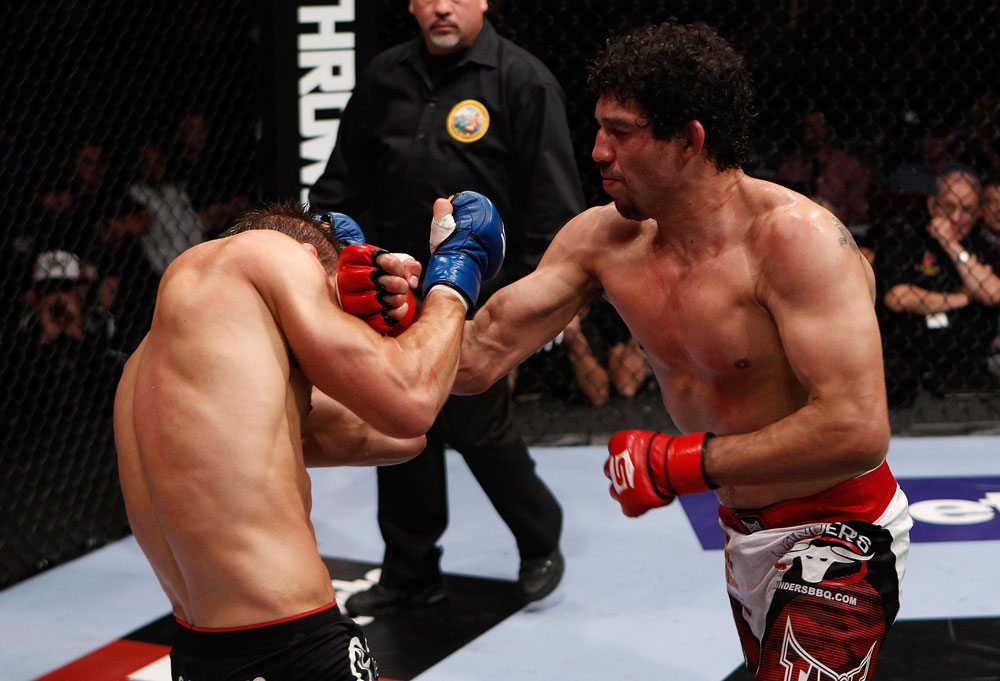 Finally, “El Niño” is entering the UFC at the top, where he’s always belonged.

It’s been a long, long time in the making, but Gilbert Melendez is debuting inside the Octagon in the UFC on FOX 7 main event this Saturday, fighting Benson Henderson for the UFC lightweight championship. This momentous occasion for MMA fans could have or should have happened in 2004 after Melendez won the WEC lightweight title or 2006 when he won the Strikeforce lightweight strap or at any point post-2009, as “El Niño” has blown through Strikeforce’s competition as their seven win streak owning two-time lightweight champ. Arguably the most decorated, accomplished, exciting, and winningest MMA fighter over the past decade to not step foot inside the Octagon is Melendez and, finally, that wrong is being unwritten.

While, Melendez could easily point to the glittery gold belts that adorn his sparkling record as reason enough for fans to stand and cheer for him, he is a proud fighter first and a consummate winner second. On April 20th, with the world watching and the UFC’s lightweight title on the line, he will walk to the Octagon to get into a fist fight.

“I think sometimes it's more important than winning to show that you're a warrior,” asserts Melendez. “I'm definitely a proud American, but I'm Mexican-American and I have that Mexican blood. You put your life on the line out there, you put your heart on the line out there, and you really fight. A fight's a fight. It's not a point match. I want people to see that I'm a warrior. I think the best compliment is respect and for people to call me a warrior; not a winner, but a warrior. That's more important for me. I hope people get that from me after this fight.”

At 31 years old with 21-2 pro career, the fourth and final horseman of Cesar Gracie’s Skrap Pack is joining the UFC’s ranks after ten years of battling for belts the world over. A lifetime ago, Melendez grew up in Santa Ana, California, where he wrestled in high school and, eventually, began attending San Francisco State University with aspirations of becoming a teacher and a wrestling coach. It was friend, SF State University alum, and fellow UFC fighter Jake Shields who threw the biggest monkey wrench into that perfectly acceptable plan by introducing Melendez to MMA. As they say, the rest is history; “El Niño” was born, becoming a featured member of Cesar Gracie Jiu Jitsu’s fearsome foursome of Melendez, Shields, Nick and Nate Diaz.

“We all basically started off as white belts together,” tells Melendez. “We are not a made up team where we grab stars and put them together and just decide to come over for a training camp. We're grass roots. I drove my white Ford Tempo and Nate would cruise in with his Focus with a bullet hole in it. We came up together like that. Jake with his f'ed up car. It's hilarious, this journey we had. I'm so proud of my team and so proud to be a part of it. We know what we're fighting for. We fight for ourselves, our team, each other, and to challenge ourselves. We like to do it our way. It's a great team to be a part of. People are trying to call us failures right now, and I've been saying that people have no idea what we've accomplished and how hard it is to get to this level. There's a lot of pressure out there. But I'm not done. I don't think any of us are done right now. I think we still want more. I think we all want that UFC strap.”

The combined record of the original 209 Stockton crew is 90-25-1, 2 NC with three Strikeforce titles, two WEC belts, four UFC title shots earned, and numerous awards and straps from smaller organizations. While a five round, headlining clash with Henderson to determine who is the unquestionable best at 155 pounds is more than enough pressure for any fighter, Melendez has a wealth of experience triumphantly tangling with the division’s top talent, and he has done that in Japan as well as his home-state of California. For those who are strictly Octagon enthusiasts, Melendez may be an unknown, but make no mistake, he has been championship material for a long time and will look to solidify that in his first UFC appearance.

“I'm happy that when the common person asks me, 'hey, do you fight in the UFC?' I can now say, 'Yes!'” says Melendez. “That's actually a big plus. I hate having to explain the whole Strikeforce thing and people thinking I'm in the minor leagues. It has set in, but you never know until you get there. Maybe it will set in more once I get there and I'm walking around, but it's just another fight to me. I've fought in rings, I've fought in Japan, I've fought and beat the Shooto champ, I've beat the DREAM champ, I was the first WEC champ, I've fought in Hawaii, I've fought with knees to the head - I've done it all. This is just a different place and a different belt and a different opportunity for me and I see it as another person standing across the cage from me. It's set in. I am happy to say I'm a UFC fighter though.”

It has been almost a year since Melendez added his last W to his record, as he victoriously finished his tremendous title trilogy with Josh Thomson in May. At their first meeting in 2008, Thomson took a unanimous decision over Melendez and the belt, which sparked a change in “El Niño”. Following that loss, Melendez started his own gym, El Niño MMA in San Francisco, which began as a loft and has ballooned into a 7,000 square foot home away from home with 275 students, coaches like Shields and striking coach Jongsanan "The Wooden Man", and open mats for him to train full-time. Riding a seven fight win streak featuring three TKOs, Melendez is healthy and ready to take on the UFC’s elite.

“I kind of reinvented myself,” explains Melendez. “There was a point where I was 13-0, 15-0 with my two amateur fights, and I was ranked at the top in the world and kind of reached my goals and the UFC buys out PRIDE and things go for a curveball again. You're on the shelf for a while and then you're in Strikeforce and you kind of lose motivation and then someone kicks your ass like Josh Thomson and you reinvent yourself. You realize this is going to be your career. I've really taken the sport serious since that. I take pride in my seven fight win streak. I can't always guarantee a win, but I can always guarantee I'm going to come in to a fight pretty well-prepared. When I come into a fight really well-prepared, I'm an animal. When I come in dang-prepared, I'm still an animal. I just take pride in performing.”

Up next for Melendez is the UFC championship collision with Henderson at UFC on FOX in San Jose. “I mean jeez, he's the UFC champ, what can I say - he's amazing,” admits Melendez of his 18-2 opponent, who most recently fought a near flawless performance against Melendez’s teammate Diaz in December. “He's an amazing athlete, big, strong, great tactics, good transitions, he's got great grappling and submissions, and he's mentally strong. Obviously, ‘watch out for his kicks, Gil;’ everyone tells me that. He's the UFC champ, what can I say, dude.”

One can easily sell this bout’s emotional edge between Melendez and Henderson because of the Diaz fight, but that’s oversimplifying the significance of this matchup. “I did want to fight him that night, that's for sure, but I'm doing this for myself and it would make it that much better to avenge my friend in the process and bring the title back for my team,” reveals Melendez. But the draw of this main event is the UFC’s current lightweight boss sharing the cage with one of the perennially toughest 155ers on the planet who ruled the roost of the rival Strikeforce for years.

This Saturday, debuting Strikeforce lightweight king Melendez tangles with UFC lightweight champ Henderson. With the added Strikeforce chip on his shoulder and looking to redeem his teammate, Melendez’s usual fists of fury will be downright terrifying as “El Niño” prepares to storm Henderson inside the Octagon. It’s champion vs. champion with Henderson’s belt on the line in Melendez’s home arena and both are looking to earn each other’s respect.

“I kind of live by the motto of kill or be killed,” states Melendez. “I go in there thinking I have to kill this guy or he's going to kill me. People can talk about good sportsmanship all they want, and I am a good sport, but the truth is is that this guy in there wants to beat me and wants to hurt me. The truth is, I want to do the same to him. Call me a bad guy, but, at that moment, he's my enemy and I have to destroy him. That's just my mentality. Afterward, we can be cool and whatever you want. But don't shake my hand or high five me when we're in there. I come in there with bad intentions, I'm sorry. Don't be mad, that's just how it is.”

This Saturday, UFC fans will finally know Melendez; with a win, they’ll never forget him.