Gilbert Melendez: The Heart of a Warrior 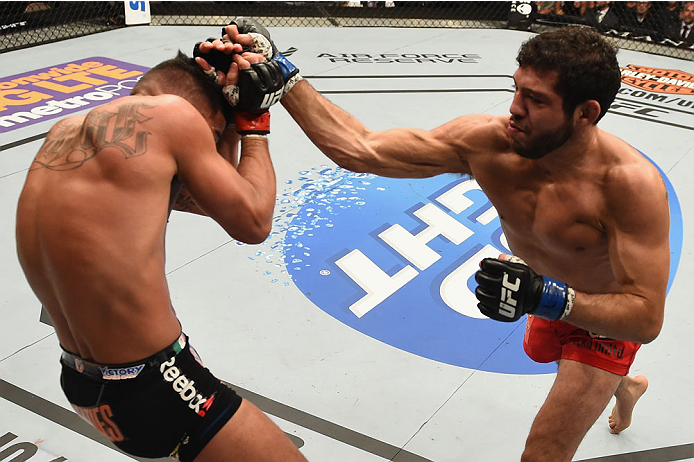 The measure of a fighter’s heart is something that always comes into question when adversity comes to call. When the proverbial hammer becomes the nail and the waters get choppy, how a fighter reacts is a tell tale sign of what beats inside of their chest and pulses through their veins.

In this regard, there has never been a doubt about the will and determination of Gilbert Melendez.

The former long-reigning Strikeforce lightweight champion turned perennial UFC contender is as tenacious as they come inside the Octagon. A true embodiment of the Mexican fighting spirit, “El Nino” pushes forward at all costs, looking to inflict damage and take the upper hand in the fray. When the tides turn, Melendez digs in and battles back because there is only ground to be gained, not lost, in what ultimately becomes a battle of inches inside the Octagon.

The saying often rings true that styles make fights, but there is so much fight inside Melendez that no matter which style he faces, there is going to be a scrap. That’s simply how he’s wired, and the 32-year-old Californian brings a guaranteed show on fight night.

Furthermore, the same rings true for his fortitude outside of the Octagon as well. Where Melendez enjoyed a long streak of success before coming to the UFC, his time under the Zuffa banner has come with mixed results. While all three of his showings on the sport’s biggest stage have been memorable and hard-fought affairs, the resilient Santa Ana native has only been able to wrangle success out of one of those bouts - two of which came with the coveted lightweight title on the line.

Nevertheless, Melendez has always carried a champion’s mentality and he’s determined to reignite the fires of his warrior spirit. In what is almost a perfect storyline writers dream of, Melendez’s next opportunity will come at UFC 188 in Mexico City, on the soil his heritage and fighting spirit was forged. It’s an ideal setting for Melendez to once again dig in, push forward, and break the will of the man who will be standing across from him.

“It is a great feeling to be fighting in Mexico City,” Melendez said. “It feels like I’ve already won round one and things are going my way. The timing, location, and everything about this fight makes me feel good. I was just down there and it was a great time. Everyone was very welcoming and the vibe just felt right. I couldn’t be happier about it.

When June 13 arrives, the man who will be attempting to stunt the “Skrap Pack” leader’s restart will be Eddie Alvarez. Both have championed other organizations and have long hovered on one another’s respective radars for the better part of the past decade, yet, it took both men signing with the UFC for the long sought after lightweight tilt to finally come to fruition.

Much like Melendez, the Team Blackzilians fighter is a hard-charging, heavy-hitting striker who uses his aggressive tendencies to his advantage. When that type of determination and tenacity is locked inside the Octagon the way it will be at UFC 188, it has the potential to bring out the best in both men.

“Everyone knows the fight between Eddie [Alvarez] and I is the perfect recipe for Fight of the Night. We are two guys who love to throw down and neither of us are willing to take a step back. Down there, they have respect for the guys who are willing to take two just to give one and that’s who I am. That’s the way I’ve always been.

“The timing is finally right for it to happen,” he added. “I knew we were going to cross paths one day and here we are. It’s weird because there are just some fighters you know you are going to fight. And Eddie is one of them. There are some fighters out there where the storyline just makes sense, but it takes timing and everything to line up. Everything has come together for me to fight Eddie and I feel at ease. I feel good with everything.”

While the bout with Alvarez is a grudge match a long time in the making, the fight at UFC 188 will serve a greater purpose in Melendez’s eyes. There’s no bigger prize in his mind than the UFC’s lightweight belt and it’s a goal that has constantly burned in his mind as the ultimate accomplishment.

Although defeating Alvarez most likely won’t catapult him to the front of the crowded ranks of the 155-pound fold, it will provide ample momentum for his run back up the divisional ladder. And that’s what a fighter like Melendez needs. Even though adversity will come - and it sure will in the fight game - as long as there is measured progress made, then the dream will never expire.

He’ll take two shots in order to give one of his best because it’s what is behind that thing he brings that will get him to the next step.

“This is a great fight because we both want to win this fight so damn bad. We are both coming off losses in our last fight and this fight is crucial for both of us. The winner goes back up into the mix and the loser gets pushed back a long ways. That’s going to make sure both guys are ready and that’s what makes this so exciting.

“It’s all about timing in this sport. You start manifesting things and envisioning things, and for some reason it’s always worked out pretty well for me. I’ve fallen short on some ends, but I’ve never stopped pushing toward my goals. The way I see this going, I get a big win right here and I’m one or two wins away from getting another title shot. I think I’m one of the few people who can match up with anyone in this division. I have a style that can beat anyone in this game, but it’s all about timing. I’ll be ready for whoever the champ is when my time comes again.”