Gilbert Melendez and the Need to Deliver

"Your next fight is always the most important fight of your life, and at this point, I need to win and I need to deliver." - Gilbert Melendez 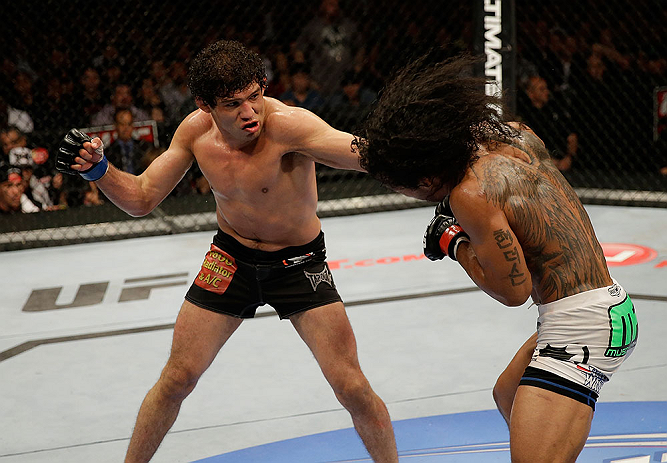 Four years prior to his UFC debut in 2013, Gilbert Melendez still knew that when his occasional training partner Diego Sanchez dropped from welterweight to lightweight that it was time to cut ties.

“It was nothing bad at all and no harsh feelings; it was just business,” said Melendez, who was the Strikeforce champion at 155 pounds back in 2009, the year Sanchez made a three-fight run at the UFC lightweight title then held by BJ Penn. Before that, “El Nino” and the “Nightmare” engaged in a series of heated training sessions in San Diego that both fighters agree would have been worthy of charging admission for.

“I have a lot of respect for Diego and he’s been a pioneer of the sport for a long time,” said Melendez. “(Teammate) Jake (Shields) took me down to go train with him in San Diego and I had a great week of training. I returned on my own a few months later for a week of training and we kept in touch here and there. He’s got great intensity, and he was a great guy to work out with. Then he cut down to ’55 and he reached out to me to train and at that point it became a conflict of interest. And though I respect him a lot, I thought it was for the best to not train with someone I could possibly fight, and here we are.”

It’s a key look into the mindset of Melendez, who, despite being a Strikeforce mainstay and likely the greatest 155-pounder that promotion had ever seen, was always thinking that the UFC was going to be in his future. And on Saturday, four years after they stopped training together, Melendez and Sanchez will meet.

“I just knew our paths would cross,” said Melendez of the UFC 166 bout, one that is one of the most highly-anticipated on a stacked card.

“It’s big that people are anticipating it,” he said. “I love it and I’m prepared for it. And if there’s one thing you want to be prepared for with Diego, it’s your cardio. You want to be in shape to go 15 minutes hard and that’s the case for me too. There’s a lot of Mexican-American pride on the line here as well, so I believe it will live up to the hype, at least on my end of the bargain.”

For the 31-year-old Melendez, this fight is an opportunity to pick up his first UFC win and to do it against one of the bigger names in the division in Sanchez. Many believe the former Strikeforce king should be 1-0 in the Octagon after his April title bout against then-champion Benson Henderson, but the judges disagreed, awarding Henderson a razor-thin split decision. It was a crushing blow to Melendez, but only for a little while.

“On the drive home I got over it,” he said. “And then I started figuring out what I could do next to improve. It was my first fight in the UFC, with a lot of branding behind me and marketing behind me, and it was great for my career. I’m an optimistic guy and I feel like I got a lot from it and I really believe I won that fight.”

So did several in the media and the UFC fanbase. Did that make it worse for Melendez to deal with, knowing that he got so close to UFC gold his first time out?

“It did at first, but it is what it is,” said the Santa Ana native. “My life would be different if I had the title right now, don’t get me wrong, but I have goals in my life, and I’ll get there one way or the other.”

It all starts with Sanchez, a familiar face, but not too familiar, giving Melendez just enough to work with in camp, but still keeping him sharp at the same time.

“I know how he feels, I’ve grappled with him and sparred with him, and things have changed, but I’m aware.”

What has been no mystery this time around is the reality that on fight night, Melendez will be gearing up for a three round non-title fight for the first time since 2007.

“It’s been a transition, but it’s a lot less stressful and a lot more fun to come to practice,” he said. “Out of the gate I can spar three five-minute rounds the first day of practice. But the level of intensity and aggression has gone up, and that’s a little bit of a transition, but I adjusted well to it and I like training for 15 minutes. I feel like I can leave it all out there a little bit more.”

Against the cardio machine that is Sanchez, seeing Melendez go full tilt for three rounds may have the UFC brass filling out the Fight of the Night check ahead of time for these two lightweights. But that hasn’t entered Melendez’ mind. All he’s thinking about is winning.

“Two losses in a row on your record is dangerous, and you’re not fighting easy talent anymore in the big leagues here in the UFC,” he said. “Your next fight is always the most important fight of your life, and at this point, I need to win and I need to deliver.”