Gilbert Burns Not Afraid To Grapple With Maia

Gilbert Burns is aware of Demian Maia's greatness in jiu-jitsu. He's ready to take that challenge head on at UFC Brasilia.
By Thomas Gerbasi, on Twitter: @TGerbasi • Mar. 12, 2020

The chatter around Saturday’s UFC Fight Night co-main event in Brasilia is that the matchup between Demian Maia and Gilbert Burns pits two of the welterweight division’s top grapplers against each other in a bout that will most likely see plenty of jiu-jitsu action on the mat.

Burns agrees. Then again, while only three of Maia’s 28 pro MMA wins have come by way of knockout (and two of those were due to injury), two of Burns’ 10 UFC victories have come courtesy of heavy hands he will be throwing early and often this weekend.

“One hundred percent,” he laughs before explaining that what is expected to be a grappling battle could stay standing for three rounds or less. “I do think a lot of people underestimate his striking. I was talking to (UFC welterweight champion) Kamaru (Usman), and he said he (Maia) can hit, he can move and he's smart. I don't think he likes it too much, but he knows what he's doing and he can strike, so I'm working a lot on my striking.”

He chuckles, then continues.

“I don't know, I just get a feeling that we're gonna grapple, so I'm working jiu-jitsu too, but don't get me wrong, I'm gonna swing to his face, as well.”

It’s a conundrum of epic proportions for the 33-year-old Burns. Does he go all-in with his standup game in order to take the win on the feet, or does he match wits with Maia on the mat, knowing that beating the jiu-jitsu wizard there would be an even bigger feather in his cap? Well, if Burns, a four-time world jiu-jitsu champion, follows his heart, beating Maia on the ground would be the perfect changing of the guard. 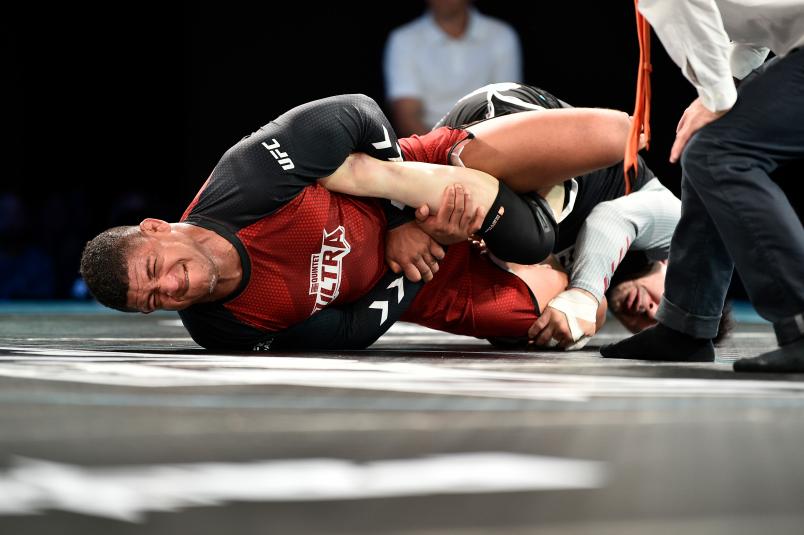 “I believe so much in my jiu-jitsu that I think we're going to match up super well in the grappling aspect and I'm going to swing, but I'm looking forward to grappling him,” said Burns. “I'm confident in my grappling against Demian Maia and it will put my name in a different position if I outgrapple Demian because for a long, long time, he was the guy. He brought the jiu-jitsu flag into MMA, and he wasn't the first one, but he made a big impact, and I want to keep that going. I'm working super hard to honor this opportunity.”

Honor is a good word to use when discussing how Burns and Maia approach the sport, because they’ve both been a credit to the game in and out of the Octagon. So not surprisingly, these Brazilian gentlemen have focused on technique and the fight in camp, not verbal warfare.

“It's nice,” said Burns. “I have a lot of respect for him and before we got this fight done, we were talking about training together. On my side, we're just gonna go in there, work hard, the better man's gonna win and we're gonna keep the same level of respect. No trash talk sounds good to me.”

A fifth consecutive win doesn’t sound too bad, either, and that’s what Burns is seeking in Brasilia. If he gets it, the No. 12-ranked contender will skyrocket into the top ten, making the decision to move from lightweight back to welterweight last year a stroke of genius by “Durinho,” who expects to be staying at 170 for the foreseeable future.

And what a home it is, filled with some of the toughest competitors in the sport and a host of intriguing matchups for a fighter like Burns. But first there’s Maia, and Burns couldn’t have been happier with the way things played out for him to get this fight.

“There are a lot of things that make this fight special,” he said. “First, because he's a legend; he's a future Hall of Famer who's very experienced in the Octagon and he's a big Brazilian name in jiu-jitsu. So I was super excited. It's a huge opportunity for me to face a guy like Demian Maia in Brazil and I'm very confident.”

He’s even on the fight poster. So how many of those is the Niteroi native bringing back to his home in Florida?

“All that I can,” he laughs. “I'm making my little gym here in my garage and I have a place already for the poster. I'm very excited.”

All good stuff for Burns, but there is the big question to be asked. After all the fights and grappling matches he competed in last year, is he going to take his foot off the gas a little in 2020?

“It won’t be with the same intensity,” he said. “I think last year I did way too much. I got sick by the end of the year, and Christmas Eve I was sick because I was doing way too much. I think I did nine to ten corners last year, a lot of grappling tournaments, plus my fights, so it was too much. I'm still gonna compete, because that brings my jiu-jitsu to a different level. So I'll slow down a little, because last year was crazy, but I'm looking forward to still competing in jiu-jitsu and all the grappling tournaments that show up.”

“It was hard to turn them down.”

We’re going to take Burns at his word, but don’t be surprised if he’s got every weekend in April booked for grappling events.

“I will grapple at least once in April, that's for sure.”