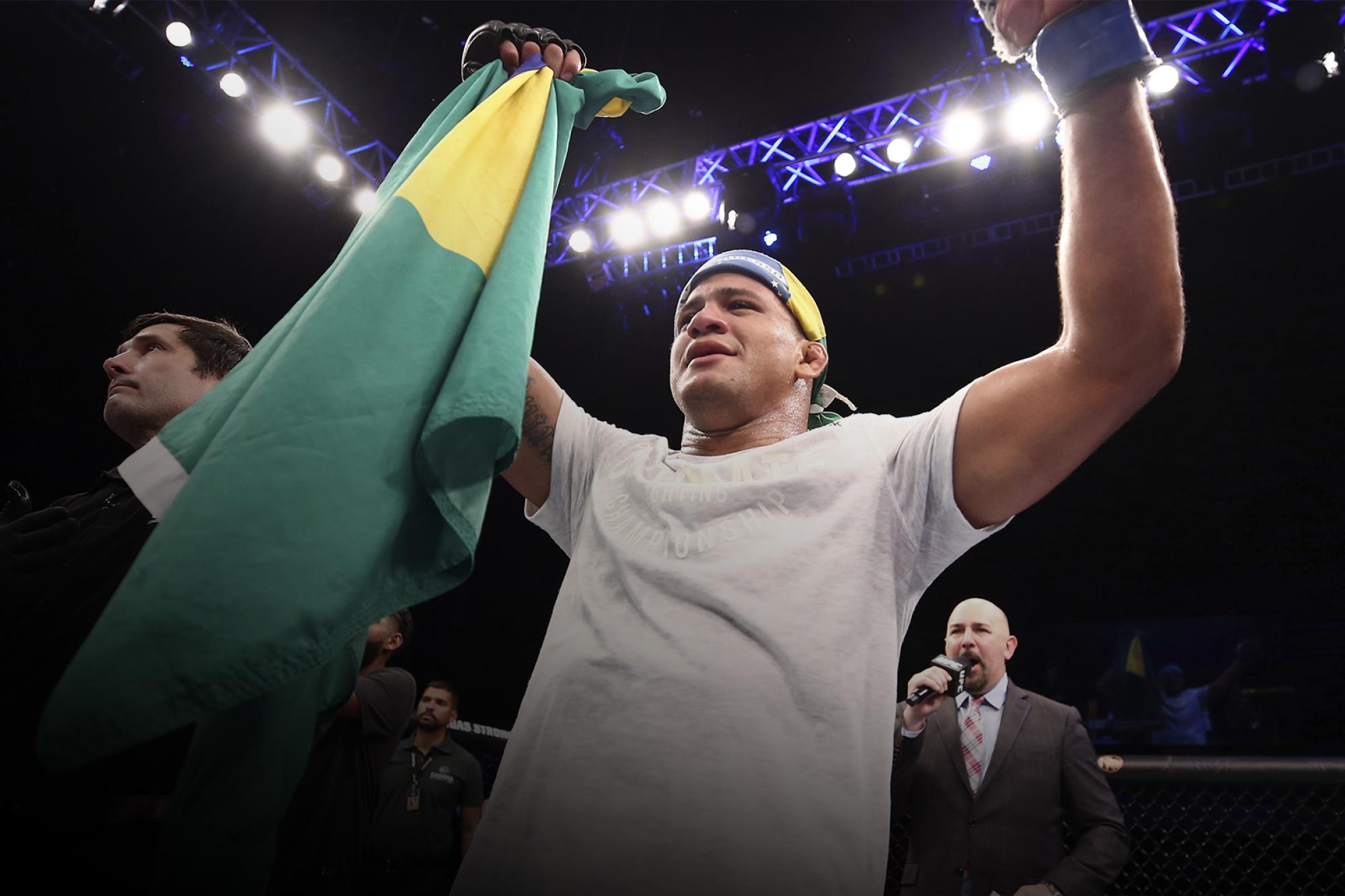 Gilbert Burns Is A Name To Remember

Gilbert Burns is determined to make people remember his name when he fights the former champ on Saturday.
By Thomas Gerbasi, on Twitter: @TGerbasi • May. 28, 2020

Gilbert Burns had barely finished celebrating the biggest win of his career on March 14 when he went looking for another fight. In the middle of a pandemic.

“It's like the kid in the class where the teacher asks any question and they put their hands up, ‘Me, me,’” Burns laughs. “That was me. Who wants to fight (Tryon) Woodley? Me. I want to fight, especially the number one contender and former champ.”

On Saturday, Burns gets his wish when he faces Tyron Woodley in the main event of the UFC’s return to Las Vegas. Sounds simple enough, but it was a long road to get the fight done, going back to the week after Burns’ first-round TKO of Demian Maia.

By that time, the COVID-19 pandemic was closing everything down. In fact, the Burns-Maia fight was fought in an empty arena in Brasilia. It was expected the next week’s UFC London card featuring Woodley against Leon Edwards was either going to proceed in the same way or moved entirely to the United States. Soon, the plan was to go to the States, but Edwards wouldn’t be able to make it.

Then there were talks of Woodley fighting Burns on April 18. No go.

Finally, the fight was made for this weekend, and no one was happier than “Durinho,” who admits he was doubtful for a while.

“When (UFC President) Dana White said it, that's when I started to believe it more,” said Burns. “I was getting ready anyway. I love to train and I'm hungry to get better and I love to stay in shape. It's just the normal routine of training hard, and as soon as they confirmed the date, I said, okay, we're doing it. I got pretty excited.”

It’s a great matchup, the former champ on the comeback trail against the hungry contender who reinvented himself at 170 pounds. But even before the bout begins at the UFC Apex, you have to appreciate Burns’ dogged determination to get Woodley in the Octagon.

“All due respect to the guy, but I tried to be funny and make the fight happen and make people laugh about it,” Burns said. “But the real reason was because I want to fight. Nothing's bigger than that. If they're doing a fight, you better put my name in there.”

And give credit to Woodley for taking the fight against the explosive Brazilian, who has shown the ability to end fights with his striking or his world-class jiu-jitsu game. That’s a tough combination to prepare for, and if you’re playing MMA math, it took Burns less than three minutes to do what Woodley couldn’t in five rounds with Maia. So Burns understands perhaps why the fight didn’t happen sooner.

Burns has also stayed busy and sharp. Since Woodley lost his title to Kamaru Usman in 2019, Burns has fought and won four times. Three of those wins have come in his return to welterweight, a move that wasn’t just necessary, but one requested by those closest to him, his wife Bruna and his nutritionist Dr. Marcelo Ferro.

And though Burns made the final decision after two rough weight cuts to 155 pounds before fights with Dan Hooker and Mike Davis, he’s glad he had those experiences.

“I needed the lessons, I needed the loss to Dan Hooker, having the worst weight cut before that fight, then having a bad weight cut again with Mike Davis.  I was beating myself up so much with the weight cut, and as soon as I stopped, I started performing better and feeling better. My last fight speaks for itself. It was a lot of experience, a lot of learning.”

Now there’s just a lot of winning for the 33-year-old, who may enter Saturday’s bout as the underdog to the oddsmakers, but not to the man in the mirror. And if Woodley or anyone else is underestimating him, Burns welcomes the opportunity to silence the doubters.

“I think as of right now, they should know who I am,” he said. “But to be honest, I don't even care if they realize or not. As soon as they close the cage, if they didn't know, now you know.”