Gilbert Burns: "I'm Coming To Brazil For A Finish"

UFC Welterweight Gilbert Burns Is Determined To Put On The Performance Of A Lifetime In Front Of The Brazilian Faithful At UFC 283: Teixeira vs Hill
By Gavin Porter, On Twitter @ItsGavinPorter • Jan. 17, 2023

By the time that the first athlete makes the walk at UFC 283: Teixeira vs Hill, it will have been 1044 days since UFC’s last event in Brazil.

That event, UFC Brasília, took place on March 14, 2020, right when the world was going into full-scale COVID-19 protocols. The UFC adjusted accordingly that day, closing the event to the public while still allowing the athletes to compete.

One of those fighters was Gilbert Burns, who knocked out Demian Maia that night. The 36-year-old welterweight is slated to compete on UFC 283 against Neil Magny, and he is determined to give the Brazilian fans a night to remember.

“Even though you don’t feel like it, it is a lot of pressure for me to fight in Brazil,” Burns told UFC.com.

“They haven’t had a UFC event in such a long time and the last time was an empty arena. Brazil lost in the World Cup and the economy has been bad. Not just me, but every Brazilian on the card has the pressure to win. We all come from struggles, and we all want to deliver for the fans.” 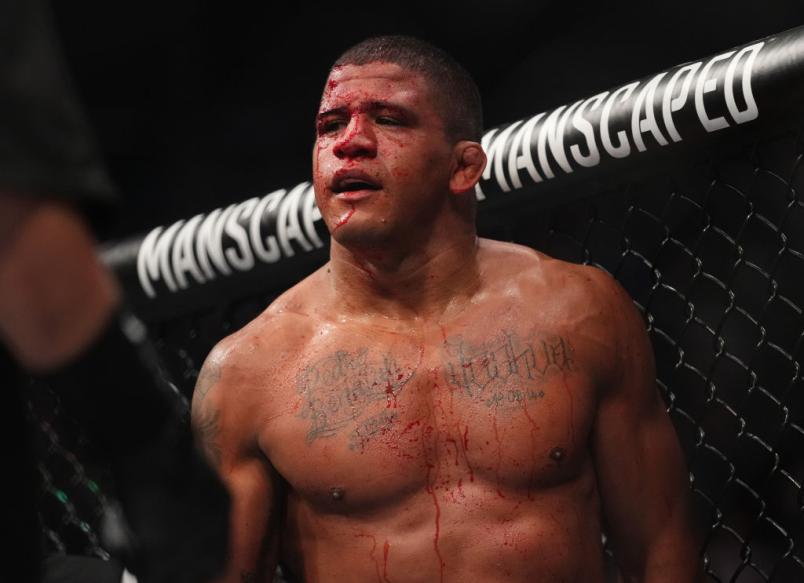 Gilbert Burns of Brazil reacts after the conclusion of his battle against Khamzat Chimaev in their welterweight fight during the UFC 273 event at VyStar Veterans Memorial Arena on April 09, 2022 in Jacksonville, Florida. (Photo by Cooper Neill/Zuffa LLC)

A lot has changed for “Durinho” since that night when he beat Maia.

He’s established himself as one of the biggest names at welterweight and he did it by fighting the best of the best. After beating Maia, he mauled Tyron Woodley, then fought Kamaru Usman for the welterweight title, defeated Stephen Thompson, and fought Khamzat Chimaev in one of the best fights of 2022.

“I established myself as one of the top contenders in the division,” Burns said. “I will fight any one of these guys. The real fans know who I am. I’m not a trash talker but I back up everything I say.”

Burns proved that in his UFC 273 loss to Chimaev. There wasn’t exactly a line of fighters chomping at the bit to fight Chimaev, but Burns welcomed the challenge. The risk didn’t come without reward, as Burns’ impressive back-and-forth battle with Chimaev helped him in favor with UFC fans around the world.

Burns is proud that the heart and the skill he showed in that fight didn’t go unnoticed.

“At the end of the day, I still lost, it was super close, but I think just because I stepped up and fought him and we went to a war that people valued me as a fighter more,” Burns said.

Unfortunately for Burns, an injury and difficulties finding an opponent prevented him from capitalizing on the momentum from the Chimaev fight. It was a frustrating time for Burns, who was calling out on social media for basically any welterweight to accept a fight with him on UFC 283. 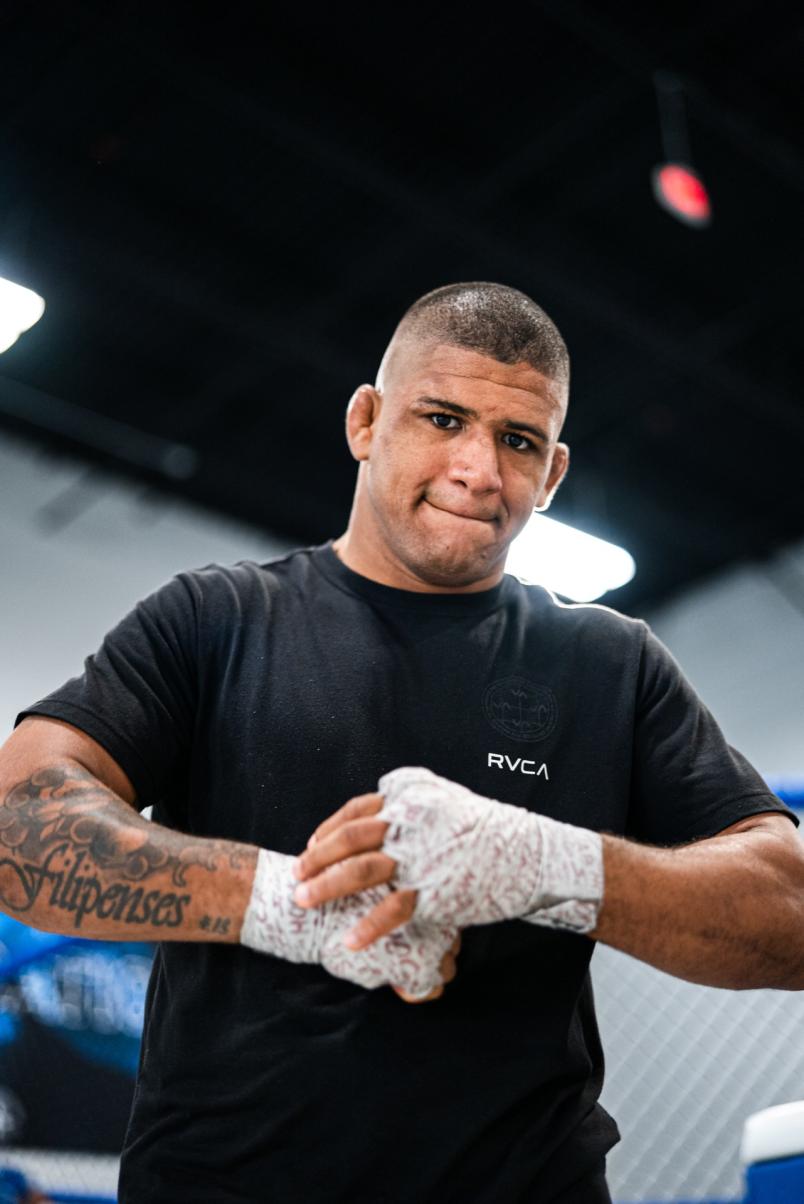 “I wasn’t getting a fight for a while. I had a little surgery, but the recovery was so smooth and so good that I was ready in September. So that’s when I started asking for a fight. I thought I was going to fight before Brazil but when I saw the schedule had Brazil, I was like, someone has to step up,” Burns said.

That’s when Magny came into the picture.

“I’m in the Top 5 right now and Magny was back in the rankings, but no one said yes to fighting me, so what was I supposed to do? Not fight?” Burns said. “He has so much experience and he’s tough and durable. He just broke the welterweight win record, and he was the only one who stepped up.”

Burns is thankful to have a partner to dance with, but he couldn’t help but take it personally that Magny was excited to face him in his own backyard.

That extra motivation is something that Burns is happy to have in the back of his mind, but he’s not going to let that cloud his mind. He’s determined to not only get the win and get back on the path to welterweight title contention, but he’s focused on putting on a brilliant showcase for the Brazilian people.

More 2022 UFC.com Awards: The Newcomers | The Upsets | The Submissions | The Knockouts  | The Fighters

“I’m pumped to be fighting in Brazil. The card will be awesome,” Burns said. “I have a ton of people going who are going to be crazy and loud. That will make me my best. It’s a good pressure, not a bad pressure. I want to make everyone proud.” 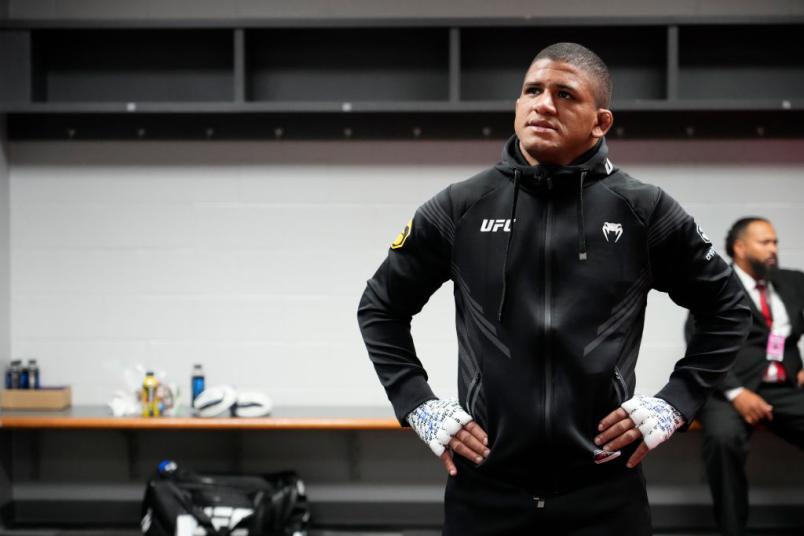 Gilbert Burns of Brazil warms up prior to his fight during the UFC 273 event at VyStar Veterans Memorial Arena on April 09, 2022 in Jacksonville, Florida. (Photo by Mike Roach/Zuffa LLC)

One of the things Burns can’t wait to feel is the energy in Jeunesse Arena when he walks out to the Octagon. Even though he’s made that walk 18 times, he can’t anticipate what it will be like this time, and that’s exciting to him.

“That’s where I get the most nerves. Even though in Brazil I will be the favorite, but I’m very nervous at that time. I want to be composed and perform my best and enjoy it as much as I can. I can’t wait for that feeling,” Burns said. “I think I’m going to be the most nervous I’ve ever been and I’m going to love it. As soon as I’m in the Octagon, the switch will get flipped.”

Flipping the switch and beating Magny is the start of Burns’ 2023 goals. He wants to insert his name into the welterweight title picture and eventually wrap that shiny gold belt around his waist.

But he knows he can’t get there unless he gets past Magny.

“This is the first step to getting back to fighting for the belt. It’s going to be fireworks. I’m coming to Brazil for a finish.”