Read on for full results of the UFC 166 main card.

Four favorites proved why they got top billing on the UFC 166 main card; and though Daniel Cormier proved his dominance and John Dodson and Gabriel Gonzaga won with stellar first-round knockouts, the story of the event inside Houston’s Toyota Center was the Fight of the Century put on by lightweights Gilbert Melendez and Diego Sanchez.

Gilbert Melendez vs. Diego Sanchez
Nearly mirror images in age, height, weight, reach, intensity and career longevity, lightweights Gilbert Melendez and Diego Sanchez were an easy bet for UFC 166’s Fight of the Night. And the two delivered, engaging in a fifteen minute standup thriller that Joe Rogan called the greatest fight he’d ever seen. Though Melendez won the unanimous decision, Sanchez gave no sign that he was a +480 underdog, the biggest of the card.

Out of the gate, Sanchez charged forward, caught one of Melendez’ kicks, and used it to dump “El Nino” onto his back. He scrambled for Melendez’ back, got a body lock in and worked for the choke, but Melendez escaped and returned fire of his own, punctuating it with a body shot against the cage. Early on, it was clear that Sanchez’ fear-no-man approach would put him on the losing end of Melendez’ technical boxing. Melendez punished Sanchez for takedown attempts with hammerfists, counters and one massive knee. A right hand in the center of the cage opened up a big cut on Sanchez’ forehead, but in true Diego style, he never stopped coming forward. The two erupted in a fistic war in the final seconds, with Sanchez rocked but never stopping until the referee intervened, the sound of the bell drowned out by the roar of the crowd.

Sanchez stopped his takedown attempts in the second, but each wild punch he threw opened him for 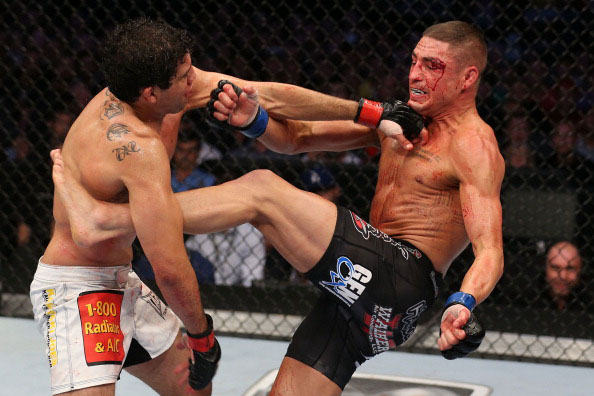 a counter hook or knee from the patient Melendez. A break brought a doctor visit to Sanchez and his badly-cut forehead, but he was allowed to continue. Melendez continued to score, notably with a brutal combo to Sanchez’ body against the fence, and another strike that dropped him in the center of the mat. Sanchez did score a takedown late in the round, but Melendez easily crawled out and returned to his sniper’s perch in front of the frustrated southpaw.

Sanchez took a low stance in the third, abandoning it quickly when Melendez welcomed it with a high kick. The crowd was deafing as the two traded in a movie-style blow-for-blow exchange, Sanchez never relenting and forcing the action all around the Octagon before the ref broke for another visit to Sanchez’ trademark bloodied face. The crowd chanted for “Diego” when the fight resumed, Sanchez iron will and tough New Mexico grit keeping him standing up through the best of Melendez’ shots. His dogged pursuit paid off as he dropped Melendez in the final two minutes and tried to lock in two choked, a feat made impossible with all the sweat and blood. The crowd rose to its feet along with the fighters for the final minute, with Melendez taking a bodylock from the back and Sanchez reversing before one last insane exchange before the bell.

The crowd roared again for Diego Sanchez’ post-fight interview with Joe Rogan, as he asked for a five-round rematch. “In my mind and my heart we are the toughest two lightweights out there and I take my hat off to Gil," said Sanchez after the fight.

Melendez’ scores were 29-28 twice and 30-27, with the former Strikeforce champion improving to 22-3 overall. “It was a battle and exactly what I expected from him as an opponent," said Melendez. "He didn’t go down at all." Sanchez’ loss drops him to 26-6 but with no fewer fans, as UFC president Dana White made a rare trip to press row to rave about Sanchez’ performance.

Both looking slimmer than in previous outings – Nelson weighed in at 249, Cormier at 224 – the two circled carefully before Cormier went for a single-leg. Nelson resisted, but Cormier, an Olympic wrestler, completed it. He got several more takedowns from various awkward postures as Nelson tried various holds to defend. Cormier landed a few knees to Nelson’s head, a big one to the gut and one to 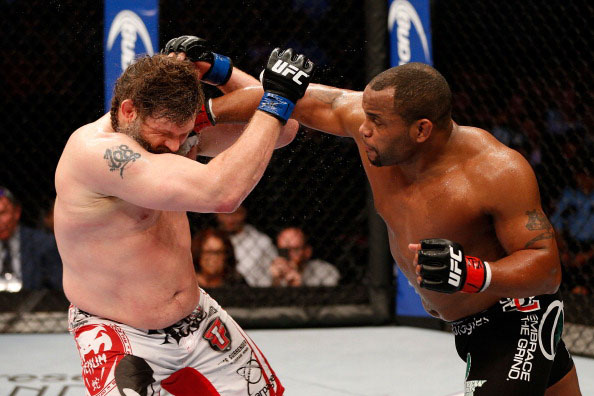 the groin that earned Nelson a brief reprieve. Nelson took control on the break, dodging forward and throwing his signature, night-ending overhand right, but it was Cormier who connected on his counter shots.

In round two, Nelson started setting up his shots with jabs and low kicks, with Cormier quick to weave and change levels. Against the fence, Cormier unleashed another knee to the body and more overhands, then got one more takedown. But though Nelson’s size may have hurt him in the cardio department, it did allow him to stand up with relative ease after each takedown. Cormier’s own overhands began finding their marks as the wearied Nelson left his hands down, inviting offense. Cormier responded by wielding a series of high kicks, none of them devastating but all of them keeping him at a safe range.

Round three was more of the same, with Cormier athletically putting together kick combinations that caught the plodding Nelson at every level. Cormier drove through Nelson with a massive strike and followed it with a takedown. With a minute left, Nelson threw caution to the wind, goading Cormier forward and loading up to wing a massive uppercut. Cormier wisely closed the distance to keep his perfect record and see his hand raised before racing backstage to corner his teammate, champion and main eventer Cain Velasquez.

Cormier, who’s announced his plans to head to the 205-pound division next, improves to 13-0, while Nelson falls to 20-9.

The two tested one another early, with Gonzaga landing a few leg kicks first on the southpaw. As 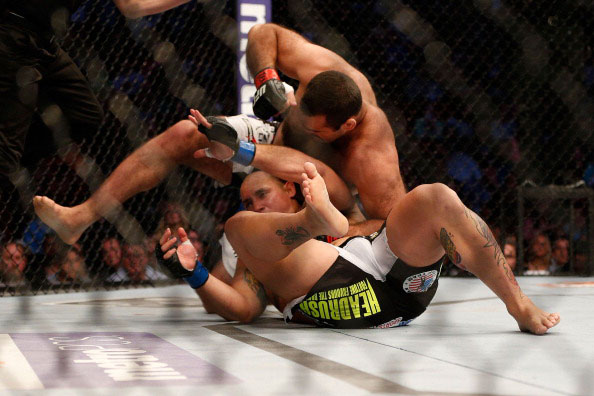 Jordan came forward to land a hard right and left, Gonzaga lobbed a picture-perfect right that dropped Jordan. “Napao” followed with hammerfists that finished the night.

“I was expecting to throw some good punches and get the victory,” said Gonzaga. “The training at my gym has helped me a lot. We got together and fixed the mistakes I was making in the past.  Before I was worried about winning and losing, now I'm just focused on the fight and that's the key.”

Gonzaga’s 17th UFC appearance improves his record to 16-7; he’s finished his last two opponents in less than two minutes combined. The finish also ties Gonzaga with Frank Mir for the most combined finishes in heavyweight history (11 total). Jordan slips to 15-5.

John Dodson vs. Darrell Montague
Flyweight contender John “The Magician” Dodson opened the Pay-Per-View in true showman fashion, knocking out the debuting Darrell Montague in the first round.

The two squared off and feinted early, with Dodson working to find his range on the taller southpaw. A big right hand was the first signaled that he’d found his distance. Midway through the round, a lightning-fast left dropped Montague, and Dodson followed up with a huge suplex and a vicious 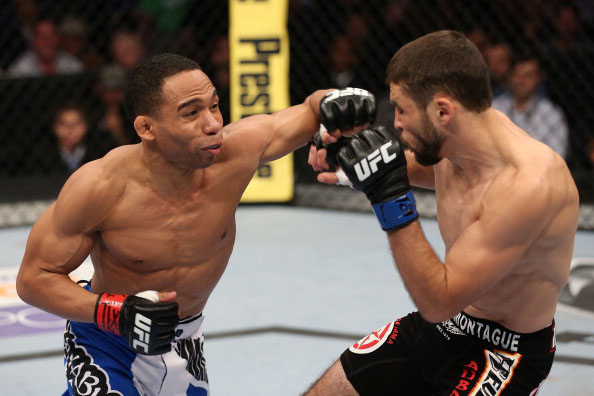 combination against the fence that included elbows and a big uppercut. Montague survived only by diving for a single leg, and, though he seemed dazed, did get to his feet again and back in the game with a straight. But a crisp left hook from Dodson hit so hard, Montague didn’t even realize he was hurt for a second, as he staggered for a moment before face-planting and trying to take down the referee who intervened at 4:13.

Dodson celebrated by running up three of the Octagon’s eight walls and flipping backward, slipping and falling backward on the final spin. He followed up with an airborne twist, botched the landing, and nearly collapsed with laughter.

Dodson, ranked second in the division after taking champion Demetrious Johnson the distance in their January title fight, gets back in the win column and ups his record to 16-6. Montague slips to 13-3, with his other losses coming to UFC veterans Robbie Peralta and Ian McCall.