Giga Chikadze Is On A Mission

Each one of Giga Chikadze’s years in the UFC has been better than the last.

He won his debut in 2019, then added four more victories to his resume in 2020, picking up extra steam with his first-round knockout win over Jamey Simmons. That performance earned Chikadze the opportunity to face longtime contender Cub Swanson in his first high-profile matchup.

Chikadze passed the Swanson test with flying colors, finishing him with his trademark “Giga Kick” to the body in exactly one minute. The victory opened some eyes and put Chikadze in his first UFC main event opposite Edson Barboza, where he knocked out the dynamic Brazilian striker in emphatic fashion.

And with that, 2021 went down as the year that Chikadze announced his presence in the top ten of the featherweight rankings and as a true contender.

It was also the first year where Chikadze fully acted like a professional athlete. A bad weight cut at the end of 2020 forced him to reevaluate his training methods and his diet. He used information provided to him by the UFC Performance Institute to change some things and improve his routine.

“I was a super professional athlete in 2021,” Chikadze told UFC.com. “There were no off-days for me. I changed a ton and learned what smart work was. I listened to coaches, my nutritionist, the UFC PI and other fighters who would give me advice. 2021 felt like it was my time to run through and take over the division and show that I’m a championship level fighter.

With everything clicking, Chikadze’s confidence is at an all-time high. He’s fully bought into the process put forth by his coaching staff at Kings MMA and is determined to make 2022 his most successful year in the UFC yet.

“Right now, I feel like I’m in super mode,” Chikadze said. “Definitely 2021 was great, 2020 was great as well. Every year is better and better, but the main plan and the goal is to get to the top of the division and get a belt to make the people who stand behind me happy. Bringing that first belt to Georgia, I’ve worked my ass off for it and I’ve sacrificed a lot and my family has sacrificed a lot. This is not a dream, it’s a mission.” 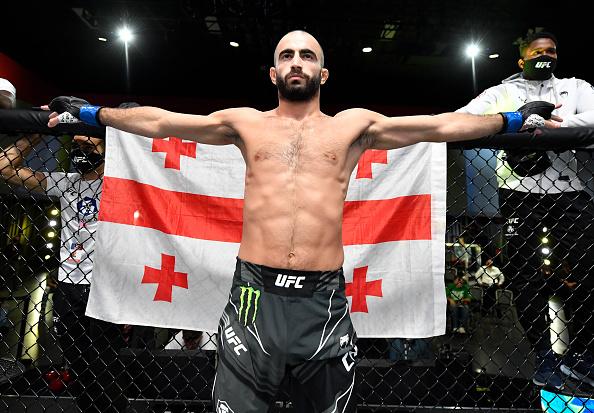 Giga Chikadze of Georgia prepares to fight Edson Barboza of Brazil in a featherweight fight during the UFC Fight Night event at UFC APEX on August 28, 2021 in Las Vegas, Nevada. (Photo by Chris Unger/Zuffa LLC)

That mission continues Saturday when he faces Calvin Kattar in the UFC’s first main event of 2022.

“I’m fighting the number five ranked guy, which I really wanted to get for a long time, and I finally I have a shot at him. It can put me in the top five. It’s a big chance for me,” Chikadze said. “There has been a gap since the last fight and this time away only benefits me. Everyone is thirsty to watch some exciting fights and that’s when the ‘Ninja’ steps in.”

Chikadze versus Kattar is the type of fight that should have fans excited. Both featherweights are must-watch TV and have plenty of ground to gain from a statement victory. Chikadze is expecting Kattar to be his usual self inside the Octagon – tough, gritty, and down for a fight.

Kattar hasn’t been finished in the UFC and Chikadze is taking it upon himself to become the first man to accomplish that feat.

“This guy has very good boxing techniques and you don’t really see a lot of guys in our division finish guys and I know how tough Calvin is. Plus, he finishes fights. This guy has KO power. I’ve seen him beating a lot of great fighters and finish them and that makes me even more excited to fight him. When I finish him, people can start talking about this. That’s my big challenge this time,” Chikadze said. “Max Holloway was close to finishing him but couldn’t do it so I think it would be big for me to take him out.”

Taking out Kattar would put Chikadze on a short list of featherweights within reach of champion Alexander Volkanovski’s belt and, more importantly, put Chikadze one step closer to achieving his life-long mission.

“I know all the guys in the top five are super dangerous, but that’s why I’m here. I want to beat the best guys in the world, and I have no doubt that I will,” Chikadze said. “I can beat anyone in the featherweight division and in 2022 I’ll prove that.”