Giga Chikadze knows exactly what he wants for his 2021 campaign.

“I wanna be the number one contender for the title, if not the champion,” he told UFC.com. “I really want to be as busy this year as I was last year. I want all these things to keep going. I want to get the title, the first from all these crazy Georgian fighters coming up and taking over the UFC. It’s kind of a healthy competition, and I want to be the first one.”

Building off his 4-0 run in 2020, which brought him to 5-0 overall in the Octagon since debuting in September 2019, Chikadze is also hoping to score another finish. He earned his first one his last time out, connecting with one of his famous “Giga kicks” to Jamey Simmons’ head in the first round of their fight.

That first stoppage got a small monkey off Chikadze’s back and provided a sign that the 32-year-old kickboxing ace was starting to find his flow in the Octagon. It also showed his readiness for a higher level of competition, which he gets in the form of all-action veteran Cub Swanson, who is coming off a pair of cathartic wins in his last two fights.

First, Swanson outdueled Kron Gracie in a Fight of the Night effort that halted a four-fight skid. Then, after suffering a major knee injury in the Quintet grappling tournament in December 2019, Swanson returned a year later at UFC 256. There, against Daniel Pineda, Swanson racked up his first knockout win since 2013.

“I’m a fan,” Chikadze said of Swanson. “I’m still a fan. Not this week. Only this week, I’m not going to be his fan. After, we can talk, and we can talk even nice things. I know this guy for a long time. We met, we trained, he gave me a couple of ideas also for the ground game. We have many friends between us. He’s a great fighter. He’s a legend for the UFC. For me, it’s an honor to fight him.”

It’s a good bit of matchmaking, pairing the always-tough Swanson against the self-described “best striker in the promotion,” a title Chikadze aims to prove each time he competes.

The matchup is one Chikadze hopes illustrates his full mixed martial arts game, though, knowing Swanson is as solid on the ground as he is with his hands. Chikadze believes Swanson will employ a boxer-wrestler approach in hopes of negating Chikadze’s kickboxing-centric attack, but ultimately, he knows the kind of fighter Swanson is at all times. 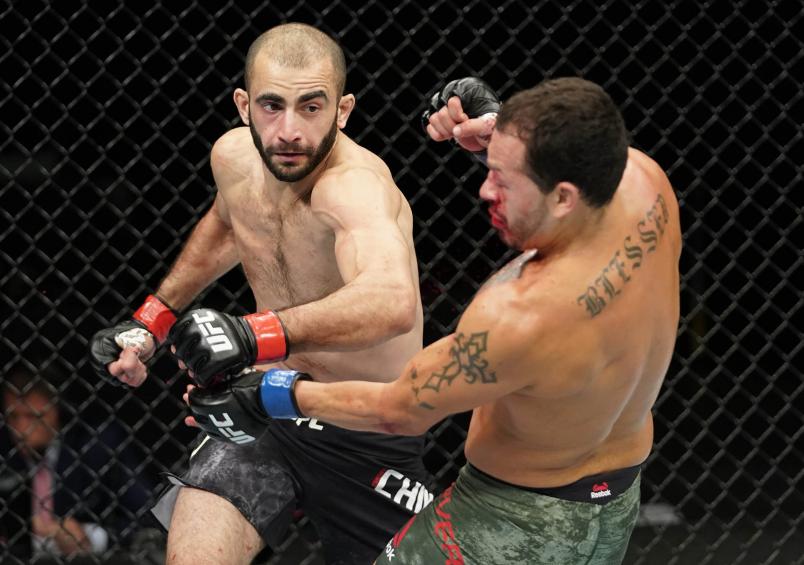 Giga Chikadze puts it on Irwin Rivera, May 16, 2020 in Jacksonville, FL (Photo by Cooper Neill/Zuffa LLC)

“He brings, first of all, a lot of excitement,” Chikadze said. “That’s why Cub is good. He’s good at striking, good in boxing, good in kicking and wrestling and the ground game. I don’t think he’s going to be something surprising because I know exactly what he’s doing. He’s good everywhere, but there are the levels above the good too in some things, and that’s why I feel that I am the best striker in the organization, and now, even my wrestling and ground game is good, so I think it’s an exciting fight, but I’m going to end this fight with a finish.”

Although finding that first finish in the UFC took Chikadze longer than one might’ve expected upon his entrance to the roster (each of his seven professional wins before the UFC were finishes), he draws confidence from having been in “deep water.” That kind of Octagon time is routinely cited as irreplaceable and irreplicable.

“I feel that this is what I’m built for,” he said. “This is my home, and I’m just enjoying every single second I’m spending in the Octagon.”

Another aspect to Chikadze’s career thus far is the fact that he hasn’t really garnered the kind of buzz around his fights that he feels is appropriate. Perhaps that lack of hype is manufactured motivation from Chikadze’s point of view, but in the talent-laden featherweight division, Chikadze certainly has the resume that lends one to think he’s absolutely someone to watch. 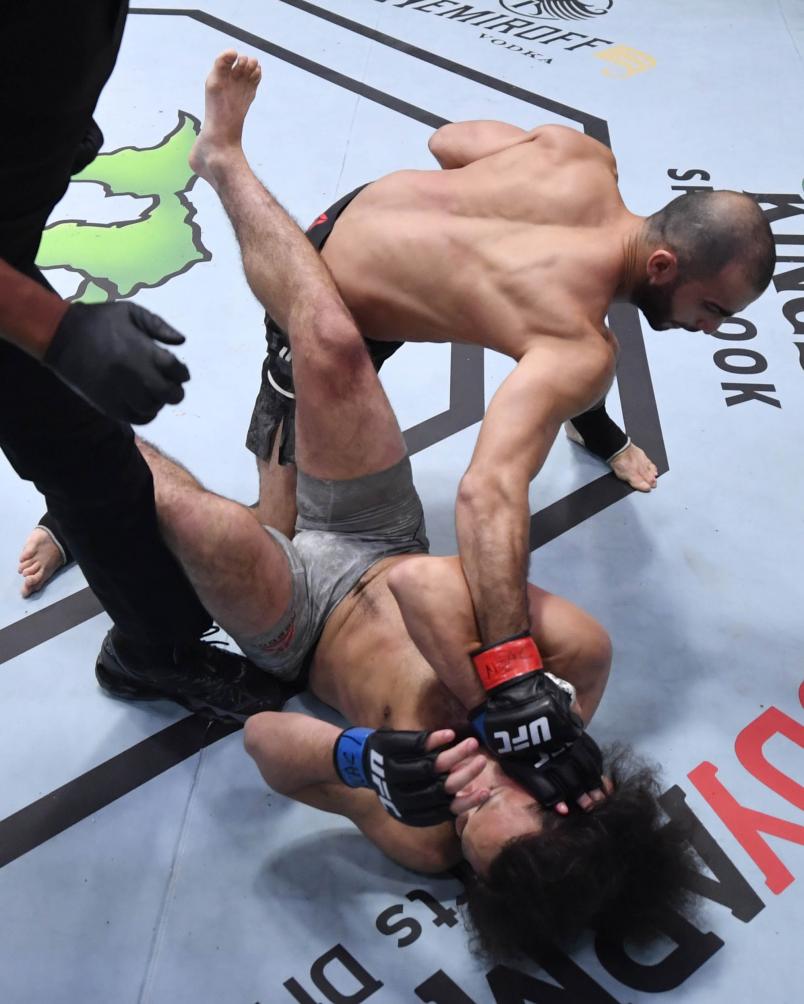 His striking talent, supplemented with his ever-growing Octagon experience, seems to benefit Chikadze tenfold. The general belief is that Chikadze, while a great striker, isn’t as versed as he needs to be on the ground, a claim he refutes, and he believes he is primed to make a run up the featherweight ladder in 2021 whether people see him as a dark horse or not.

“I was an underdog in all my fights,” Chikadze said. “Finally, I became the favorite. Like, finally. Yes, my ground game is very underrated, and my wrestling as well, but we have wrestling in the blood. Georgians, they have wrestling. They have it in the DNA. Finally, it’s waking up.”

Swanson is the kind of opponent that can multiply the respect people hold for Chikadze, especially if he finishes the Californian. That said, he understands the kind of test Swanson presents and sees him as much more than a veteran stepping-stone.

A Conversation With Dominick Reyes

Fighting in the co-main slot is the biggest spotlight in which Chikadze has stood so far in his career, and he says he is going to expect main event opportunities to come soon if he gets the job done. Ultimately, though, he wants to show people – peers and fans alike – that he is a fighter “without any gaps,” one that, by year’s end, could be within shouting distance of the ultimate goal: UFC gold.

“I want people to see me as the best MMA fighter,” he said. “If the fight goes by decision, I want to be, all these 15 minutes, a dominant fighter everywhere it goes. Striking, wrestling or ground game. I have a tough opponent, but I’m promising to knock this guy out.”

"It's a huge honor but I'm going to do my thing."@Giga_Chikadze is excited for his upcoming #UFCVegas25 co-main event bout with Cub Swanson 🔊⬆️ pic.twitter.com/3ADQVPVQMy