"I’ve got to realize I’m fighting the best guys and you can’t just fight on emotion; you’ve got to fight with some sort of technique and game plan." - Gian Villante 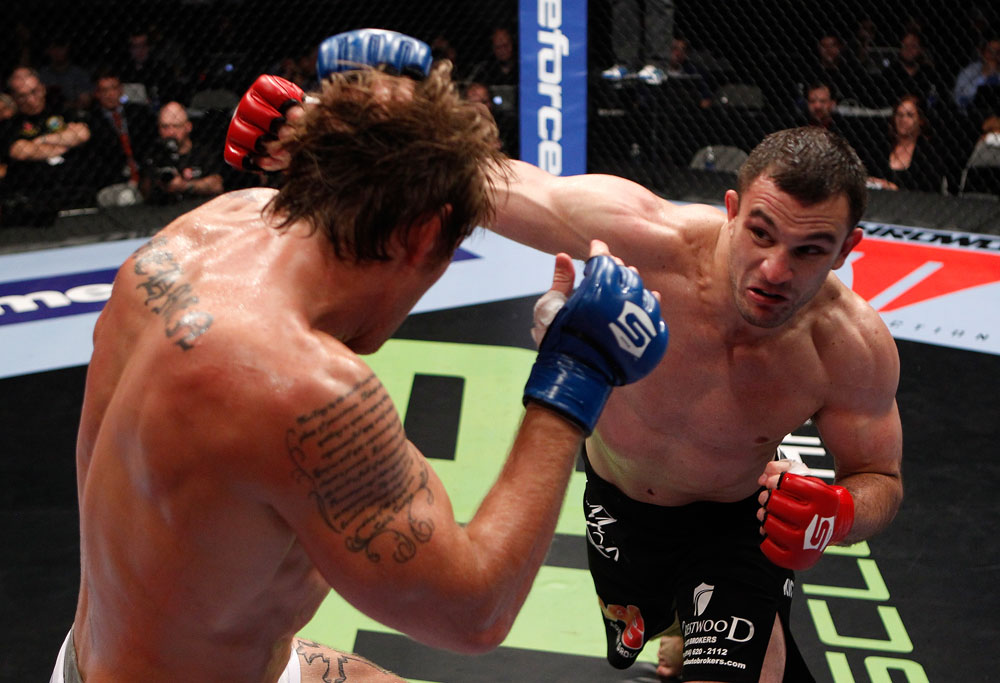 For a while, Gian Villante fought the way he played linebacker for Hofstra University. And it was working for him up until the time when it wasn’t anymore.

“There were times in the beginning where I thought I was gonna steamroll everyone, and I had to get away from that and realize that I’m not invincible,” said Villante, who makes his UFC debut this Saturday night against fellow Strikeforce import Ovince St. Preux. “You can get hurt in a fight, so fight smarter, fight better, and use the techniques that you learned, and have nothing that you’re not prepared for. I definitely prepared for everything that’s gonna be thrown my way in there. I’ve done a lot of different work with different people, and I have the best training partners to get me ready for that.”

A member of the ever growing Long Island, New York fight scene that includes UFC vets Matt Serra, Chris Weidman, Ryan La Flare, and Costa Philippou, Villante tore through practically everyone put in front of him in the early days of a pro MMA career that came on the heels of a stellar college football stint that saw him garner interest from several NFL teams. But once he got signed to Strikeforce in early 2011, he was forced into a position where he could either elevate his game or get pushed to the side.

Initially, it wasn’t easy, as he suffered back-to-back losses to Chad Griggs and Lorenz Larkin, but once he settled in and got acclimated to life in the big leagues, his talent began to show. Three wins over Keith Berry, Trevor Smith, and Derrick Mehmen followed, and in his May 2012 victory over Mehmen, Villante – who also wrestled at Hofstra – looked like he had turned a corner.

“I thought my last fight was my best fight of my career,” he said. “Even though it was a three round decision, it was a fight where I completely dominated. I’m starting to feel better sticking to game plans and using all my skills and not just trying to overpower guys and use my speed. I’d rather use all the tools I have: wrestling, the speed, the strength, the boxing, and everything else. I’m starting to use all that a little bit more, I’m sticking to the game plan, and fighting a little smarter. In those other fights, I really wasn’t fighting smarter, I was fighting more on emotion. Now I’ve got to realize I’m fighting the best guys and you can’t just fight on emotion; you’ve got to fight with some sort of technique and game plan.”

The win earned him a co-main event spot against Brazil’s Guto Inocente last September, but when the card was canceled, Villante was out of a fight. He was going to be out of a job soon too when Strikeforce closed up shop, but he was one of the group expected to be immediately transitioned over to the UFC. That’s not to say there weren’t some tense moments as he waited for everything to become official.

“I thought I was safe but then I saw that not too many guys were coming over, so it did get me a little nervous, but I had confidence in my skills that some day I’d be in the UFC,” said Villante, who now joins his good buddy Weidman in the Octagon.

“It was definitely cool,” he said of the moment he got the call that he was a UFC fighter. “I got a lot of congratulations, but I don’t think congratulations are really in order until I go out there and win. I’d rather get the congrats after I win my first fight there.”

If he can get by the always tough St. Preux (a fellow college gridiron star), the 27-year-old Villante will have earned those congratulations. And he knows he’s in for a fight this weekend.

“He’s a very athletic, explosive, strong guy, and he throws hard,” said Villante of OSP. “If he hits you, you’re gonna feel it, so I have to keep the pressure on, stay in his face, fight hard, and look to push the pace. And I know you have to be in shape to fight him because he’s coming for three rounds, and even if he looks tired, he still throws hard.”

But if things get rough, Villante will have plenty of support in New Jersey cheering him on. He expects at least 100 people to show up to the Prudential Center, and those are just the folks he knows personally. As for the first time UFC jitters, he doesn’t expect them to be an issue.

“I’ve been there, I’ve fought on TV, I fought in front of big crowds, so I’ve just got to treat it as nothing too different,” he said. “I’m not really thinking about what organization it’s for. Yeah, it’s the best organization in the world, but I’d rather just think of it as another fight that I’ve got to go out there and win. And instead of being nervous, I should be calm and cool and feel fine in there.”