Getting To Know Ali Bagautinov

UFC flyweight No. 1 contender Ali Bagautinov spoke with UFC.com on June 2 to give fans a little more insight into who he is as a person and as a fighter.

With the fight of his life on the horizon at UFC 174, Ali Bagautinov has only one thing on his mind: the UFC flyweight championship. The Russian No. 1 contender has made a name for himself at 125 pounds, with his heavy hands and his wrestling ability, and he feels he's ready to dethrone the king of the flyweights - Demetrious "Mighty Mouse" Johnson.
Johnson has dominated the division, is the only man to ever hold the flyweight title in the UFC, and is currently the No. 4-ranked pound-for-pound fighter in the official UFC rankings. Bagautinov thinks he's got what it takes to beat the champ, and UFC fans will find out if he's right on June 14.

Bagautinov spoke with UFC.com on June 2 to talk about his title fight and give fans a little window into his life.
•••

UFC.com: How was your camp? Where are you mentally headed into your first title fight in the UFC?
Ali Bagautinov: I am in a very good form and in very good shape. I'm in a fighting mood and I really want to be able to how everything that I've got in me.
UFC.com: You recently celebrated the birth of your first child, a son. What's it like to be a father? 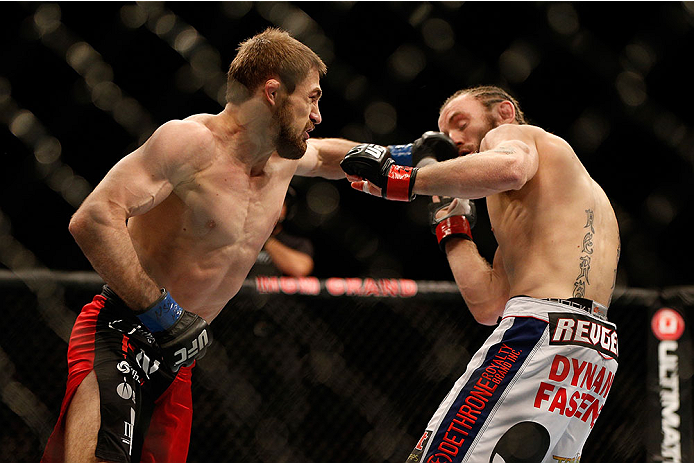 Ali Bagautinov: I didn't even have a chance to see my son, see him well I mean. He was born and two days later I had to leave Moscow and that is a very weird feeling. I can't even tell you what it means to be a father because actually I haven't even got to hold my son in my hands. What I want to do is come back to Russia, to my house, to give my belt to my son and have him play with my belt.
UFC.com: What would it be like to be the first Dagestani fighter to win UFC gold?
Ali Bagautinov: It's not just the first Dagestani - it's the first person from Russia, the entire state of Russia. I guess it would go down in history of Russia and Dagestan as well.
UFC.com: There have videos in the past of Russian fighters who wrestled with bears, specifically recently with Khabib Nurmagomedov. Have you ever wrestled a bear and is that common in Russia?
Ali Bagautinov: That has never happened in my lifetime. When I was a child I was kind of playing and wrestling with goats, but that's pretty much it. Some sheep, but that's pretty much it.

> Watch the UFC 174 extended preview
UFC.com: Is there anybody in the UFC that you have modeled yourself after or looked up to?
Ali Bagautinov: I was always admiring Anderson Silva and Randy Couture. They were both guys I enjoyed watching and admired. I admired them because when you looked at them it seemed like everything was so easy, and they did things in the cage with such ease.
UFC.com: For those that may be watching you for the first time at UFC 174, what would you say is the most exciting part of your game or skill set?
Ali Bagautinov: I think that they will see a lot of vigor and desire to win. If they support me that will be very exciting for them, and they will enjoy watching me fight.