We caught up with Suarez to get to know some more about the undefeated fighter.
By Gavin Porter • Jun. 13, 2019

UFC strawweight Tatiana Suarez is a dominant fighter. There are no if, ands or buts about it.

Her aggression, relentless pressure and vicious ground game have helped her become one of, if not the top contender to Jessica Andrade’s title. Suarez’s technical skills are continuing to develop and if you combine that with factor with her burning passion for winning, it is clear that Suarez is going to be at the top for a longtime.

And while she definitely shows a mean streak inside the Octagon, Suarez’s personality couldn’t be any different from her fighting style. Suarez is quick to make a joke, laugh out loud and is always having fun.

We caught up with Suarez to get to know some more about the undefeated fighter. From childhood sports, to Golden Doodles to crime shows.

UFC: Growing up, which sports did you participate in and what made you fall in love with wrestling?

Suarez: When I was younger I did all sports. I played soccer, I played football, I was a cheerleader, I danced, I did ballet, I Folklorico dancing which is like a Mexican style of dance, I did volley, I did baseball. I pretty much did everything except for basketball.

I just think that wrestlers are very mentally tough. They have really tough workouts and I think it mentally prepares them to be a champion. Wrestling truly shapes your mindset and pushes you to compete on another level.

UFC: Do you have any current or former UFC fighters that you are a fan of?

UFC: What is something about you that fans don’t know?

UFC: When did you start training dogs and what about it captured your interest?

UFC: What kind of music do you listen to on fight night to pump you up?

Suarez: No so when I’m in the locker room I like to listen to the crowd and kind of listen to the outside, the commentators on the screen and stuff like that. Just because I want to be where I’m at I don’t want to kind of zone out because then when I get into the cage it’s going to be more of a shock. I think if you’re around it, that’s what the sound is that’s where your environment is. Grow accustomed to your environment.

UFC:  Do you have any TV shows or genres that you’re into?

Suarez: I’m a crime show girl. I’m like obsessed, obsessed with murders, not murdering people don’t want to do that that’s bad. But finding out the killer, I like when the person gets justice. Yeah it’s not going to bring them back but put that sociopath in jail. I like Ice Cube’s show, I like Dateline and there’s one that’s crazy called “Buried In The Backyard” that’s about these 30 year old murders that are insane. 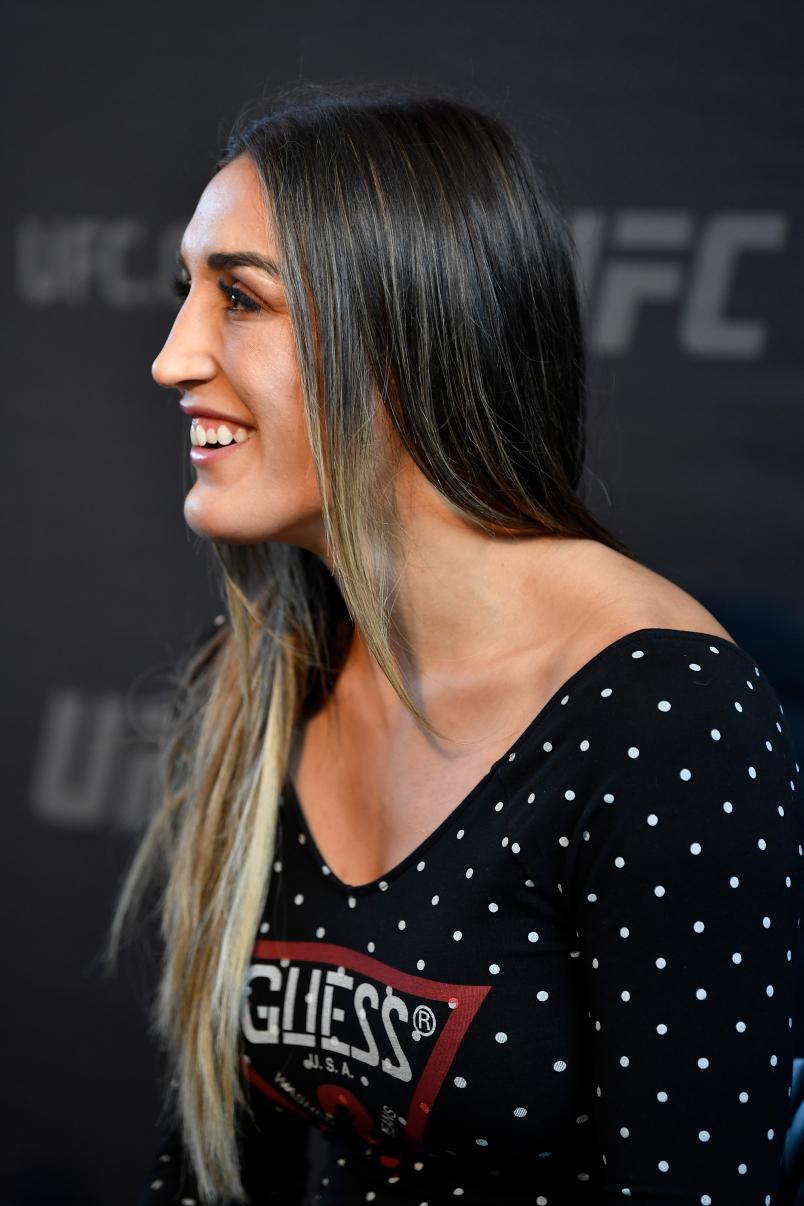 CHICAGO, IL - JUNE 06: Tatiana Suarez interacts with the media during the UFC 238 Ultimate Media Day at the United Center on June 6, 2019 in Chicago, Illinois. (Photo by Jeff Bottari/Zuffa LLC/Zuffa LLC via Getty Images)

UFC:  If you could meet a celebrity who would you pick?

Suarez: I don’t know who I’d pick. As long as they were nice. I wouldn’t want to pick someone who went from being humble and kind to stuck up and rude. I think meeting The Rock would be pretty awesome.

UFC: As you continue to work your way toward the belt you’re celebrity will likely increase. Why is it important for you stay humble and nice?