Get Ready Vegas, Edson Barboza is Coming to Town 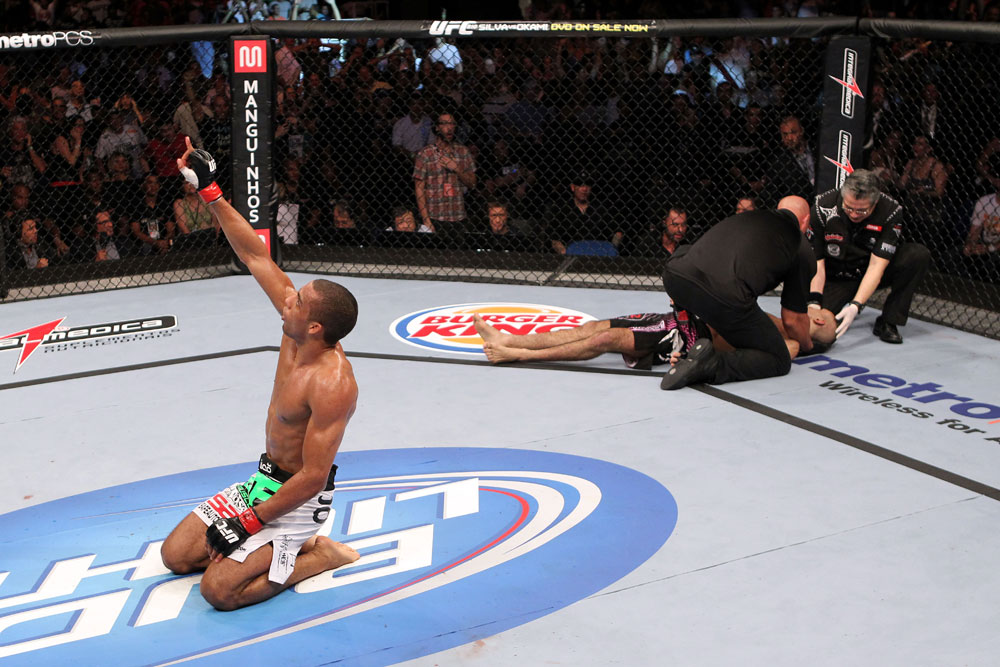 It may be cruel to point out, especially if you’re on the receiving end, but when it comes to knockouts, the ones produced by a kick to the head are always a lot more spectacular. But then came Edson Barboza’s spinning head kick finish of Terry Etim at UFC 142 in January, and the bar was set even higher, as he delivered a move that required speed, power, agility, technique, and timing, all at the same time. If you’re a fan of the art part of mixed martial arts, you could not help but be impressed.

Want to be even more impressed? Barboza admits that it isn’t even something he practices on a regular basis.

“To be honest, no, I don't train that kick much,” he said. “I like to train the basic things like body kicks or low kicks. But I’ve known how to do that kick since I was eight years old, when I started training Muay Thai. I think I have been keeping it inside of my mind, and when I need it I throw it out.”

That’s scary, and just another reminder that no matter how quickly a fighter has picked up another discipline of MMA, he will still be at a disadvantage when facing someone who has practiced that particular aspect of the sport since he was a child. For Barboza, that discipline was Muay Thai, and his teacher from the time he was eight years old was Anderson Franca.

“Anderson is more than just a coach to me,” said Barboza. “He is like my father. He is with me since the beginning of my career. He knows me more than any other coach. So, it means for me more than just a good training, what it truly is. But, it is more confidence, more stability. I trust him and I know he will do his best for me. He passed a lot of confidence to me. And it's a big blessing for me to be able to have him in my camp and at my corner.”

Now 26, Barboza is at a good time in his life and career. He is one of the top fighters in a stacked lightweight division, he’s picking up bonus checks with alarming regularity, and he is settled in Jupiter, Florida with his wife Bruna. And as of late last year, he even has Franca – the man who taught him the head kick, among other things - back with him.

“He always supported me throughout my career,” said Barboza. “When I had to give up on my Muay Thai career he was by my side, and though when I came to the US and we stayed away from each other for almost one year, we kept talking to each other, and before my fights over here, I used to call him to ask for advice. We have a great relationship. Last year I had a fight at the end of the year and he came to the US for my training camp, he stayed here on Christmas Day, away from his family, and when he did that for me, I could realize how much I was important to him and how much he was important for me. Yes, he is my master, my coach, my example as person, and also as a fighter.”

And though Barboza’s first three UFC wins were impressive, as he stopped Mike Lullo and then earned two Fight of the Night awards in decision victories over Anthony Njokuani and Ross Pearson, with Franca in his corner, the finish of Etim was a reminder of just how good the native of Nova Friburgo is. And how scary.

“I felt that I got the knockout as soon as he fell down,” he said. “But I just realized that it was a nice knockout a few minutes later when I could hear the people screaming and my coaches were jumping. So I thought ‘Man, I did it.’ It was great.”

On Saturday, Barboza returns to action at UFC 146 with a bout against former WEC lightweight champion Jamie Varner.

“He is a tough guy,” said Barboza. “Good wrestler, he has a good boxing. I think it will be a war and I am ready for that.”

Originally scheduled to face Evan Dunham before the Las Vegan was forced out of the bout due to injury, Barboza wasn’t too rattled by the switch in opponents. In fact, he wasn’t rattled at all.

“I had to change a little bit on some points,” he said, “But nothing changed too much because I am focused on my game and what I want to do.”

And what Barboza wants to do is leave an impression on fight fans watching at home and also in Las Vegas, where he will be making his debut. It’s his first bout in the States since March of 2011, as he’s won his last two fights in Brazil, and he’s eager to get back to business in his adopted home and show how he’s changed since UFC 128.

“Yes, I was missing being able to fight in US,” he said. “I love my American fans, and they are always supporting me, leaving me messages, talking to me on Twitter and on Facebook, and also sending me letters. They are awesome. As a fighter I think I've been learning a lot, improving my game on the floor and my standup game. I’ve seen my mistakes in my last fights and I am trying to correct them. But I know one thing that I didn't change was my will to do my best inside the Octagon. I've been training really hard for this fight and I want to do my best inside the Octagon for my fans.”

As mentioned earlier, Barboza’s best has resulted in several post-fight bonuses thus far, four in his last three matches to be exact. But the Brazilian banger doesn’t have the burden of expectations weighing him down as he heads into the fight capital of the world.

“I want to do a good performance inside the Octagon no matter the bonuses,” he said. “I love my job. I love what I do. And inside of the cage I want to always do my 100%. I think that was the way I was able to get those bonuses, but I am not worried about getting bonuses. I am focused on doing a good fight.”

Another good (read: winning) fight would make Barboza 5-0 in the UFC and 11-0 overall. And even though there’s a logjam at the top of the division ruled by Benson Henderson, with Frankie Edgar, Nate Diaz, and Anthony Pettis all jockeying for position, another heart-stopping finish could accelerate Barboza’s ascent into the title picture. It’s a trip he’s ready for.

“I can see myself as one of the best fighters in the world,” he said. “I know my division is tough. There are a lot of great fighters in it, and that brings me more motivation to train every day harder and harder. But there is no fighter who I watch him and I think ‘I can't fight against him,’ you know? I can fight against any fighter in my division. There are only tough fighters in the UFC, and any fighter who they put in front of me I will be ready to fight against. No matter who it is, it will be a war. And I will be ready.”