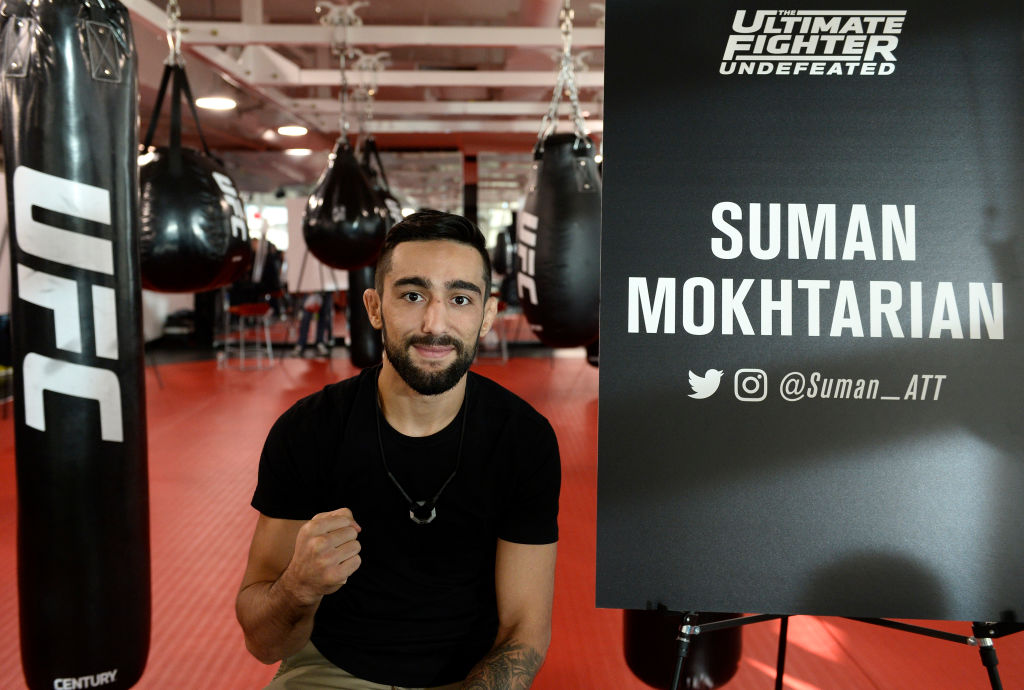 Suman Mokhtarian doesn’t sleep. Well, at least that appears to be the case, since any time an email goes out to the Aussie rep on season 27 of The Ultimate Fighter, a response is fired back within minutes. But seriously, when does he sleep?

“When the work is done,” he laughs.

The work is rarely done for a 25-year-old prizefighter, but when that prizefighter is a head coach and owner of the Australian Top Team gym and the promoter and matchmaker for the Urban Fight Night promotion, that whole no sleep thing gets taken to an entirely new level. So much so that despite a perfect 8-0 pro record, Mokhtarian was considering leaving fighting on the backburner.

“I was considering not fighting because I have so many responsibilities with my gym Australian Top Team, my promotion Urban Fight Night and my management company OneOut Fighter Management,” he said. “I’ve had my hands full. It’s obviously a dream to fight in the UFC, but I didn’t think I’d need TUF as my way into the UFC. I was confident if I fought and got another win then I would’ve done enough but you never know. There are so many good fighters out there and everyone’s knocking on the UFCs door, so you gotta be a bit blessed to have your name called.”

That realistic outlook is obviously what has made Mokhtarian a success on the business side of mixed martial arts. But as an active participant, there was still a fire to stoke, and so he decided to travel to Vegas for TUF tryouts. Then he made the show, prompting a scramble to get his world in order for a six-week absence.

“The hardest thing was shutting down my life pretty much,” he admits. “I handed all my jobs to my brother, so all my fighters were under his care and he was matchmaking for the promotion. I had high levels of anxiety and stress before leaving, but I know with the support system around me that everything would be in order.”

Mokhtarian’s older brother, Ashkan, is already familiar to UFC fans as a member of the flyweight roster, and if you see any of Suman’s interviews, it’s almost as if he’s more happy talking about his brother’s journey than his own.

“I just think it’s who I am,” said Suman. “I’d rather speak about the achievements of the people around me and those who inspired me to be a better person, and hopefully one day when I grow up and I achieve something higher I leave an impact on someone’s life in doing so. My brother wasn’t always the best, but he was always there when I needed him. Everyone’s looking for heroes on TV, but we usually forget they’re right in front of us.”
UFC MINUTE: Meet TUF fighter Suman Mokhtarian

And while it remains to be seen if Suman will make his way into the UFC, seeing his brother make the walk to the Octagon for the first time in New Zealand last June is something that will remain with him forever.

“It was emotional,” he said. “I had tears in my eyes because I was so happy, but I think I was more nervous than he was. To see that person - whether it’s your training partner or brother - on that screen when they’re about to make that walk out is a breathtaking and humbling moment.”

He’s made that walk again with his brother, as well as with strawweight prospect Nadia Kassem, establishing his Australian Top Team squad as one on the rise.

“It’s plain and simple – passion,” Mokhtarian said when asked the secret to his team’s success. “We’ve never had superstar coaches or anything like that, and we stay hungry, we stay humble and we don’t stop working. I’m a fight nerd. I love everything to do with it, so I’m always looking for more ways for our gym to improve and I may have only been in it for a short time but I’ve put everything into it. My gym and my fighters are my world, and because I’ve made myself so emotionally invested I always push my fighters to their limits. We have a bantamweight Darwin Sagurit who is UFC ready, and we’ve got an undefeated lightweight Alex Gorgees who is UFC ready. I could go on, but you’ll see these guys in the near future and they’ll take the UFC by storm.”

Mokhtarian could be next, though, and there’s little doubt that if his day comes, those past experiences being around on fight week and fight night will help greatly in eliminating the first-time UFC jitters.

“One hundred percent,” he said. “That’s my atmosphere and that’s my environment. I’ve felt it and I’ve taken it all in. It gives me goosebumps every time I think about it, but those nerves remind me how much I want it.”

Now all that’s left is getting there. On this week’s episode of TUF, Mokhtarian faces Ricky Steele. If he wins that quarterfinal fight, one more victory puts him in July’s season finale and then everything will have come together. But what of his interests outside of being an active competitor? How does he juggle being coach and fighter?

“It’s very hard,” Mokhtarian said. “I’ve always put coaching first, so I’ve never done a full camp purely invested into myself. Even the week of my own fights I’m holding pads for other fighters, and I’ve cornered my fighters the same night as my own fights as well. But if I fight in the UFC I’ve already decided I’ll put coaching aside completely for my camps in the future. Fighting at this level, there’s no halfway. You must be completely invested and I’m ready to do whatever it takes to be in that Octagon with my hand raised.”

And if he does get there, what should the fans expect from the hardest working man in the fight business?

“Someone who will never quit,” he said. “And if you ever buy a Pay-Per-View of mine you’ll get your money’s worth.”