Fans of the UFC may be getting their first look at Sijara Eubanks on season 26 of The Ultimate Fighter, but those who have worked with the promotion for any length of time are no strangers to the east coast standout. And she doesn’t forget her work with several UFC competitors over the years that saw her as the “go to” to get things done in the lead-up to fight night.

“The whole time, I was like this is the coolest thing I’ve ever seen in my life,” said Eubanks, who helped out teammates Mike Eason, Dominick Cruz and Phil Davis in the time before she began putting on the four-ounce gloves for herself. “It was almost surreal. I said, ‘One day, this is gonna be me, but it was also, ‘Holy crap, one day this could be me.’ (Laughs) But I enjoyed every moment of it. Any time we needed a volunteer to do anything having to do with the UFC, I said ‘I’ll go. I’ll hold mitts, I’ll be a grappling partner, I’ll answer phone calls, whatever you need.’ I just wanted to be as close to that life as possible because I wanted to be that so badly.”

At the time, Eubanks wasn’t on the radar of MMA fans, but in the jiu-jitsu world, she was like that underground band everyone knew was going to break big one day. A black belt in Brazilian Jiu-Jitsu with a laundry list of titles to her name, the Massachusetts native was the real deal on the mat, and while MMA promotions were waiting to see her transition to the sport, she didn’t know that such anticipation was building.

“I didn’t hear the buzz,” she said. “I knew there was buzz around jiu-jitsu, so I feel that if you knew who I was, you had to be a jiu-jitsu fan, and I didn’t think anybody in the UFC knew who I was. I really didn’t.”

MMA was going to be her eventual path, though, a decision made easier by the reality that making a living in jiu-jitsu wasn’t the easiest thing to pull off, even for a high-level competitor like Eubanks.

“I think it’s a lot harder to make a living in jiu-jitsu than it is MMA,” she said. “You really have to be mainstream, one hundred percent jiu-jitsu. You have to commit to seminars and really have to work to get sponsorships, and I just wasn’t a fighter that got sponsored a lot. People were always down to give me free stuff (Laughs), but when it came to actually paying me, I don’t know what it was. In MMA, you can start to make a decent living much earlier in your career than you could with jiu-jitsu and with much less success than jiu-jitsu.”

Money does have to be an issue at some point, yet when you hear her talk about mixed martial arts, it was clear that she was coming here whether she could make a living on the BJJ circuit or not. 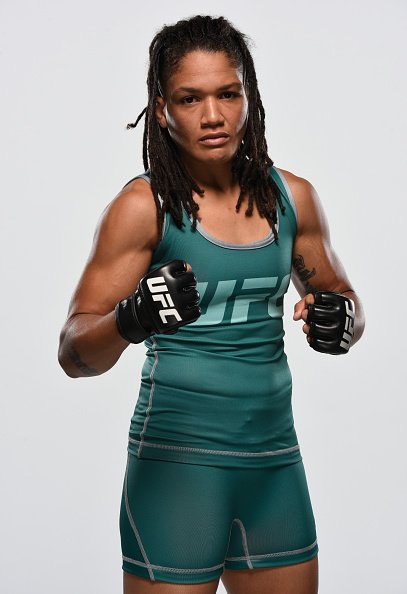 “I always wanted to do MMA,” she said. “I did as much jiu-jitsu as I did because I knew I needed a good base and a good foundation to be successful in MMA. But the goal was always to transition to MMA. And the money helps, but it wasn’t the sole motivator for me.”

Getting to punch people helped when it came to motivation.

“I followed Mike Easton’s steps,” she said of her teammate and former UFC contender. “He loved striking and we’d be like, ‘Well, you’re a black belt in jiu-jitsu.’ ‘Yeah, but I want to knock people out, though.’ I followed a similar transition.”

Eubanks debuted in 2015, and the two wins on her 2-2 record have come by knockout, with the only losses coming via decision to UFC vets Katlyn Chookagian and Aspen Ladd. She’s had some growing pains in the transition to MMA, namely the idea that while a patient ground attack could win a BJJ match, it could cost her a round and a fight in her new sport. But she’s noted this, made adjustments accordingly, and now she’s finally in striking range of her UFC dream as a member of the TUF 26 cast. And no, she’s not jaded after being around this scene for years.

“It’s hard to describe,” said Eubanks, who recently welcomed her first daughter into the world with her girlfriend. “You’ve been waiting on this thing and working towards it and daydreaming about it. Now, the closer and closer it gets, the more real it gets. It’s so hard to describe, but the feeling is incredible because it’s actually happening. The first time I walked into the TUF gym, I was like, ‘I can’t believe that I’m in this gym right now.’ It’s unreal. It’s actually happening, I’m seizing the moment and it is real and my life is the best.”

Sounds like the 32-year-old will have quite the tale to tell her daughter one day.

“The crazy thing was, I was one of these people saying it wasn’t gonna change much,” she said of parenthood. “But it’s crazy, and it does change a lot. Just my approach to everything in life. I’ve always been a person who liked to break the mold and do my own thing and I don’t like to follow the crowd. I like to pursue my passions in life, and having a baby makes me want to do that even more and with more vigor because one day I’m gonna be able to tell her these stories. So I want to make sure the story I tell is a story I’m gonna be happy to tell my little girl. It’s really been incredible.”