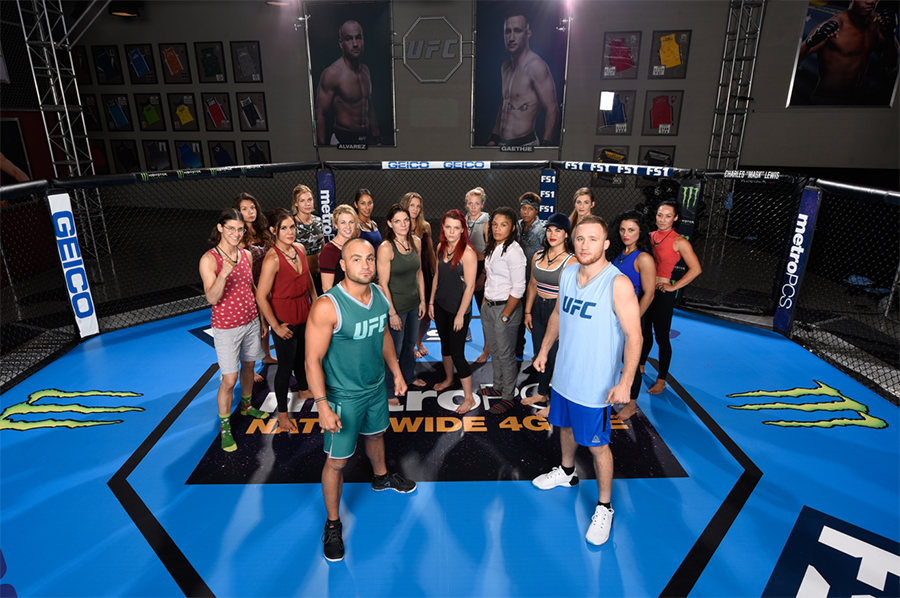 Training in the sweet science of boxing was going just fine for Shana Dobson until the former soccer player saw some folks in the Arlington, Texas gym throwing kicks.

“Whoa,” was the immediate response from the Baltimore native, who quickly moved to the other side of the gym. Then she threw her first head kick.

“I fell flat on my ass on the mat, and it was loud,” Dobson laughs. “The gym was full and everybody looked at me. But everybody was cool about it. I said, ‘I’m gonna keep going with this.’”

“I discovered that I have quick and pretty powerful kicks, and then the MMA coach said I should be on the fight team,” she recalled. “That meant jiu-jitsu and wrestling, and I got into the ground game very late. A lot of these girls started in jiu-jitsu from the time they could hold their heads up.”

Dobson, 28, didn’t have that luxury, but her fast hands and feet, along with impressive striking instincts, got her through a pair of amateur fights.

“Sprawl and brawl worked for me, and then I said I might as well get paid for this if I’m gonna get punched in the face.”

Turning pro in April of 2016, Dobson put together a 2-1 record and was a quick study in the sport who found out just as quickly that she had what it took to make a mark at 125 pounds.

“I was training with some professional level girls, and girls that fought for top promotions, and I was hanging in there. And a lot of times I was outworking them with the standup, so I realized, you know what, I am a striker by nature, so I need to make sure I stay on the feet so I can’t get taken down. I recognize that my speed and my footwork was pretty different and not something that you don’t particularly see among women because a lot of female fighters are ground fighters.”
RECAP EPISODE 1 OF THE ULTIMATE FIGHTER

And though the usual course would be get a few more regional fights, maybe get an Invicta FC deal and then see what happens, Dobson got a jolt when she found out there were going to be tryouts for the all-flyweight edition of The Ultimate Fighter. So she packed her bags, and with school out for the summer, allowing her to be off from her day job as a teacher, she headed to Vegas.

“My parents raised me very Jamaican, and when I say that, I mean every opportunity that is given to you, you take full advantage of it,” she said. “It was a once in a lifetime opportunity, and I damn sure was not gonna waste it.”

Dobson, who moved out to Texas almost six years ago to take a job for Child Protective Services, never saw this as being part of her journey. But those are the best ones.

“After working there (Child Protective Services), I realized that I fight tough, but I’m not emotionally tough for that kind of deal,” she said. “So I started to teach, and I figured that I was out here in Texas, so I might as well stay. I made a life and it’s been home ever since. It’s the place where I discovered boxing and MMA, so I definitely owe Texas a lot of credit for the positive things in my life.”

More positive things were about to take place in Vegas, though she admits that seeing some of the best flyweights in the world gunning for the same goal she had was a bit daunting.

“When I went out there and saw some of the girls and found out their records, it was a little bit intimidating, I’m not gonna lie,” she said. “But I was very confident that this was somewhere I belonged. I just needed an opportunity.”

She got it, earning a spot on Team Alvarez on season 26 of TUF. And while she fell short of victory in her opening round bout against top seed Roxanne Modafferi, Dobson guarantees that we haven’t heard the last of her.

“I went in with an open mind, willing to grow, and knowing that I have a little something,” she said. “I did feel down because my goal when I went out to Vegas was not to get on the show and get on the UFC roster; it was to obtain the belt, to get that strap. But I learned so much out there and it changed me completely as a fighter and as a person.”