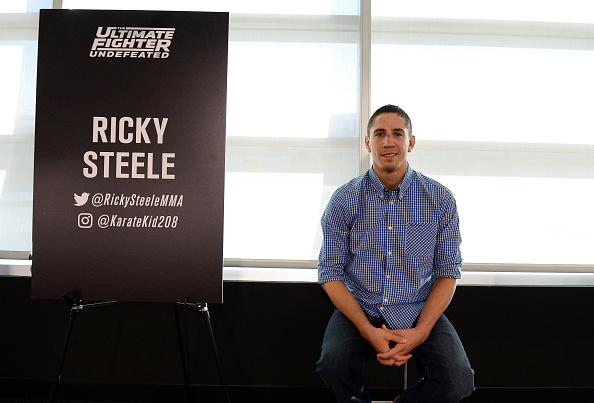 For a long time, Ricky Steele has been doing things with his fists and feet that would immediately earn him membership in the “cool dad” club. But it wasn’t until he returned home to Idaho after taping The Ultimate Fighter: Undefeated in Las Vegas that he got his official membership card.

“When I got back, DC (TUF coach Daniel Cormier) wrote me a text message, and she thought that was the coolest thing ever,” laughed Steele, who has raised quite the fight aficionado in his daughter. “She’s 11 years old and she knows the sport more than most people do. She sees the fight game that people don’t see.”

That fight game is one in which there’s more than meets the eye in Steele’s 5-0 MMA record. And it’s not all good. A martial artist for much of his 29 years, earning the nickname “The Karate Kid” for his striking acumen, Steele ultimately turned to MMA, turning pro in 2013. But in the subsequent five years, he’s only managed five fights due to injury, with a knee injury the winter before TUF tryouts making him wonder whether this was going to be a path he continued on.

“I own an asphalt paving business and I’m just working, but still thinking, this is my dream, I’m undefeated, but look at all these ups and downs that I’ve had,” Steele said. “I was contemplating what I wanted to do and I said, I just love to do this and I’m gonna keep doing it. I finished up a hard work season and filled out the online form for the tryouts, got my plane ticket that night and knew in my heart that this was it. I’ve always known if ever the Ultimate Fighter opportunity came around, I think I have that style and side story that they like. I’ve got a huge following here in Idaho, so it worked out perfect. It was like it was meant to be.”

Then came the hard part, which was leaving his daughter and his business behind for six weeks to chase his dream.

“It was crazy, it was hard, but we knew what we were in for, there’s no doubt about it,” he said. “It was hard because I’ve got an 11-year-old daughter I had to leave behind, but at the same time, it was the easiest thing I’ve ever done. When you get an opportunity like this, you don’t pass it up. This is your chance to go and be more than average and really test yourself and do yourself proud and do the family proud. I knew what I was in for, I knew it was gonna be hard, but I didn’t hesitate at all.”

Tonight, TUF viewers will get their first look at Steele when he fights Suman Mokhtarian in a quarterfinal matchup. If he wins, another victory puts him in the season finale in July. That’s the place Steele has always wanted to be in ever since he stepped into the gym in 2010 to find Scott Jorgensen preparing for his WEC / UFC title fight against Dominick Cruz.

“How motivating and amazing is that?” said Steele. “And I just so happened to be good enough with my striking that I was able to compete with these guys on the feet from the very first day. I’m a martial artist; I’m not a fighter or a streetfighter. This is my love, my art, and I show the utmost respect for it, so just bringing that in, he (Jorgensen) took a liking to me right away and he took me in as a training partner. I’m training and working my way up as an amateur, training with Scott Jorgensen twice a day every day. He’s fought everybody, and being around somebody with that mentality, it’s just been amazing. He’s happy and excited for me, it’s genuine and it’s great. I’m really happy to call him a friend.”

If Steele sounds like the most optimistic fighter in the world, if he’s not, he’s certainly in the top ten. The reason is simple. When he goes to the gym or fights, it’s truly for the love of the game. Sure, the prospect of making big money and changing the voice mail on his phone from Steele Paving to Ricky Steele, UFC fighter, is an enticing one, but for now, he’s not doing this because he has to, but because he wants to.

“I choose to do this because I just love it,” he said. “I missed out on a lot of money, what I’ve done to my body, the sacrifices, the time. I just love to do it. I feel that makes me a real dangerous fighter because you’re not gonna scare me away, you ain’t gonna hit me hard enough to make me quit. I chose to be here, I gave up everything to be here, so I honestly feel that makes me dangerous.”

More dangerous than most.

“When you’re fighting to eat and fighting to provide for a family, that would be very motivating for me,” Steele said. “However, I strictly choose to do it because I absolutely want nothing more than to do it. I’m chasing my dream, I’m using my God-given talent, which I think would be a sin not to. It’s when I feel closest to God and I absolutely love the martial arts, I love the people that I’ve met, but most importantly, my daughter’s watching me. So I’m just as motivated as anybody.”

And if Steele makes it to the big show, just think of the texts dad will be getting then.

“She loves this,” he said of his daughter. “The support my little girl gives me, the belief she has in me, there’s never been a question of if I’m gonna be in the UFC or if I’m gonna make it. It’s when, and daddy’s doing it.”