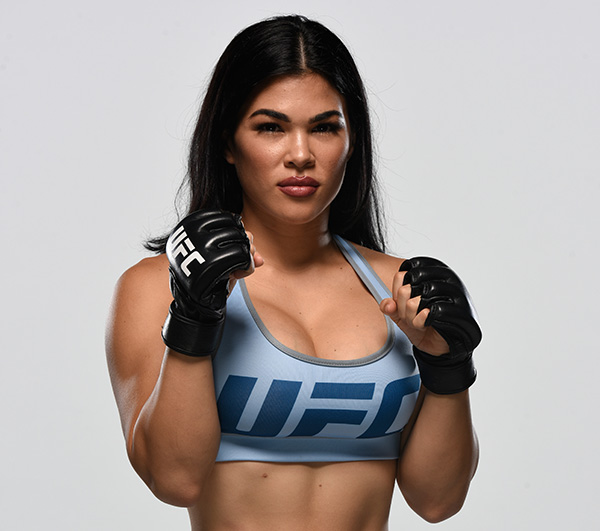 The Ultimate Fighter: at the UFC TUF Gym on July 15, 2017 in Las Vegas, Nevada. (Photo by Brandon Magnus/Zuffa LLC)" align="center" />As the daughter of Bob Ostovich, a pro fighter who fought the likes of Bobby Southworth, Andy Wang, Thomas Denny and Jason Von Flue over the course of an eight-year career, Rachael Ostovich-Berdon might have been a natural to follow her dad into the world of MMA.

But the Waianae had a different first love when it came to athletics.

“I thought I wanted to be a professional cheerleader,” she said. “The competitive cheerleading that I was in, it was crazy. I feel like it helped me with MMA. (Laughs) But I wanted to be some type of professional athlete, and I cheered my whole life and that was it. I tried out for college and I ended up not making it, and I was devastated because I swore to my mom that I was gonna have a full ride scholarship. But God has his plans and, after that, I started doing MMA.”

Today, the 26-year-old is a flyweight prospect with a 3-3 pro record and the opportunity to add the phrase “world champion” to her resume if she can get through the toughest tournament in sports on season 26 of The Ultimate Fighter. This Wednesday, Ostovich competes for a spot in the quarterfinals against Hungary’s Melinda Fabian, and it’s just the latest chapter in a long, strange trip to get to this point.

But maybe it was all destiny, not just with Ostovich being the daughter of a fighter, but as a native of Hawaii, a place where the fighting culture is embraced by its residents.

“In Hawaii, we’re warriors and I feel like that fighting spirit was automatically in me,” she said. “There’s definitely a fighter inside of me and I’ve been a fighter since I was born. I think you can see that in my fights. Even when I have really tough times, I’m always fighting and always trying to win and get out of those tough situations.

“I grew up with that same mentality and that’s how it is in Hawaii,” Ostovich continues. “We don’t really talk too much. If you have a problem, we just bang it out. I grew up on the west side, and there were a lot of rowdy kids, but luckily, I just kept the peace with everyone, so I actually never got into a fight outside of the cage.”

“That could have been it,” she laughs. “Everybody knew my dad fought, and I did a little wrestling and stuff, but I was cool with everyone, so I don’t think anyone wanted to really fight me.”

Her personality bears that out, as Ostovich is as affable as they come in the fight game, a game that she was around for as long as she can remember.

“I was definitely into it,” she said. “We didn’t have any babysitters to watch us while he trained, so we were always at the gym. It was just the lifestyle. He didn’t really want us to come to his fights, but we went to a couple and I loved it. I loved the atmosphere and it was like the modern day gladiators. I thought that was so cool, and at the same time, I thought it was normal.”

A post shared by Rachael Ostovich Berdon (@rachaelostovichberdon) on Oct 16, 2017 at 6:15pm PDT

And that love for the sport as a lifestyle has been passed down, as Ostovich conducts this interview while bringing her four-year-old daughter to the gym with her. I wonder how mom would react if her daughter wanted to be an MMA fighter one day.

“If she told me that, I would probably roll my eyes first, but then I’d be her best training partner,” Ostovich said. “Whatever she wants to do, I’m gonna support it. Fighting is so hard, but so rewarding at the same time. It’s kind of an addiction that we can’t get away from, so I’m sure my daughter is gonna wrestle in high school. But whether she wants to pursue it and take it further, we’ll just pray for the best.”

That’s exactly what Ostovich is doing right now. Finally in a place in her career where she feels she can break the pattern of fighting just once a year, she’s ready to make a run at the top – for herself, her family, and her island.

“I feel like all the pieces are coming together like that nice puzzle,” she said. “And here, we all have that same mentality where we want to put Hawaii on the map. We want to be good influences and we want to inspire others from Hawaii. As cliché as it sounds, go for your dreams. It can happen. If we can do it, you can do it.”