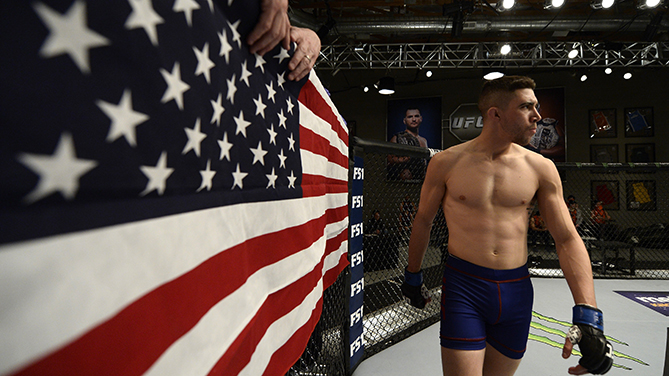 Mike Trizano had reached a crossroads in his mixed martial arts career. It was a little early for such a situation, but it was a crossroads nonetheless.

Sporting a perfect 6-0 record that included a win in Bellator and several victories for the Ring of Combat promotion, the New Jersey prospect was obviously on the right track to the UFC, but why not speed up the process through The Ultimate Fighter??

His coach had some reservations, though.

“If you want to go and that’s really what you want to do, I have your back one hundred percent,” he told Trizano. “In my opinion, I feel like if you were to get at least ten fights under your belt, you would be a lot more comfortable when you’re in there at the UFC level.”

“I didn’t feel bad. He had a good point because you see a lot of these guys, and they’ve got 25-30 fights. They have a tremendous amount of experience. But it doesn’t matter. I’m a fighter, I’ll go in there and fight and I don’t really care how much experience a guy has.”

"All we gotta do is just eat, sleep and breathe fighting," - @thelonewolfmma is loving The @UltimateFighter & will have his first shot at having his hand raised tomorrow night. #UFCMinute pic.twitter.com/KjKs3ySv9y
— UFC News (@UFCNews) May 15, 2018

That’s fighter talk. Then he heard some more of it from his Tiger Schulmann MMA teammate and current UFC bantamweight contender Jimmie Rivera, who took the long road to the Octagon.

“He (Rivera) said, ‘If an opportunity comes up, you’ve got to take it,’” recalled Trizano, who got the blessing of his coach and took the trip to Las Vegas for the TUF 27 tryouts.

“I don’t want to live with regret,” he said. “I’m a hundred percent, I want to do this, I want to take the opportunity. Worst case scenario, they don’t pick me to be on the show and I continue doing what I was doing. I had nothing to lose. So I ended up going and I got the opportunity to learn under some high level guys and that’s an opportunity not many people are able to get. I feel blessed to be able to take my career to that point.”

A member of Team Miocic on the reality show, Trizano will fight for the first time in the competition on Wednesday night against Thailand Clark. Needless to say, it’s been a trip watching himself on TV each week.

Other reality shows won’t take a prizefighter from the local scene and put him in the big show, but TUF can. And if Trizano does get to the UFC, he will join teammates Rivera, Shane Burgos and Julio Arce as members of a squad that once got denigrated for having a great marketing plan. These days, that’s not the case anymore.

“It’s not so much that we’re the guys on TV (with commercials), but I think we get a lot of guys that resent us because we kick ass,” Trizano said. “I think there’s a little bit of jealousy, not so much that they think we’re a McDojo, like some people have said in the past, but we’re legit. We’re a mixed martial arts school. I think we’re the one and only, purest form of mixed martial arts school out there. We do everything under one roof. I think people are just haters because we’re that good and we’re taking over.”

And while he won’t have his teammates behind him while on TUF, as soon as he gets back to his post-TUF business, watch out.

“We’re not just a team and a gym,” he said. “We’re a family. All the guys that I train with, they’re all my brothers and we’re all going to war together and we’re out to help each other. And by helping each other out and helping each other prepare for our fights, it gets everybody better at the same time.”

Add in his girlfriend and parents that actually encouraged him when he was thinking about leaving school and taking a run at his MMA dreams, and the 26-year-old is a living, breathing and fighting reminder that while this is an individual sport under the bright lights, to get there, it takes an army.

“I wouldn’t be where I am today if I didn’t have the support that I do, not only with my family, but specifically with my girlfriend,” Trizano said. “She is the behind the scenes person, she helps me deal with my social media because that’s stressful in itself. (Laughs) She helps me cook and is giving me diet tips, so she takes a lot of weight off my shoulders, and having her around helps me push and keep my mind focused on one thing, and that’s the fight. And my family is there every single time I fight. They’re talking about me to everybody, getting more people behind me, it’s unreal. I honestly believe I’m where I’m at today because of the support I have.”