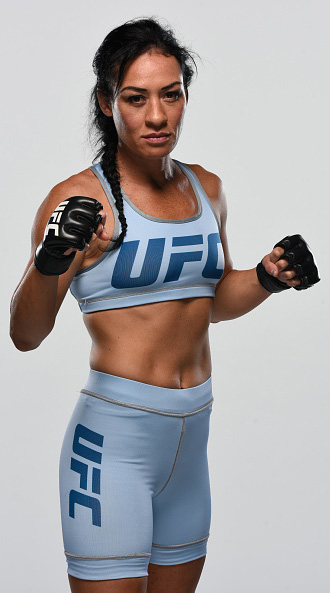 But when her coach was forced to tend to family matters when his son was in an accident, that career hit the skids.

“A lot of the girls at that time hadn’t turned pro because we were waiting for the Olympics to roll around,” she said. “But we all knew that was years away. And my boxing coach, his son was in an accident, and that took him away from me. He had to be with his family and I never found anybody else that I felt comfortable training with. So right then and there, boxing stopped. And in a six-month period, that’s when I met Joe. Boxing stopped and life with Joe took over.”

Joe is Joe Stevenson, TUF 2 winner and former UFC lightweight title challenger. The two met, hit it off, and would eventually marry. Boxing was seemingly over, an odd situation considering that in California, a walk down the block can see someone trip over at least a couple trainers.

“You know how girl boxers are? They find somebody and they stick with that one forever. I am so picky about who I bring on. I found a few, but when you find someone who puts so much time and effort into you, and then you have to fight your way up with a different coach, it doesn’t always work.”

Joe Stevenson did know that he married a fighter, though, and as he battled his way up the ranks, he slowly brought his bride into the world of mixed martial arts. It was going to be difficult, but for Maia, that was precisely the point.

“Everyone always asked me if it was hard to watch Joe fight, and no, it’s not hard because I’m competitive and I know what he’s capable of and how he’s supposed to perform,” she said. “It’s a sport to me. I know it was difficult for him, but it’s one of those obstacles you have to get through. I’m somebody who likes to make things difficult (laughs), so I wanted to do it. There was never a point where I was like, ‘Oh no, I don’t think I can go through that.’ Well, if I think I can’t go through that, then I know I have to do that.”

Between being a wife and a mother to their kids, Maia eventually became an MMA fighter, turning pro in 2012. She proceeded to go 1-4 in her first five bouts. In boxing, that would be a death sentence for a fighter. In MMA, she had her husband letting her know that there was a light at the end of the tunnel as long as she kept going.

“When I went 1-4 and lost to Kanako (Murata in 2016), I’m sitting there and realizing that I’m letting my life get in the way of certain things and maybe this isn’t for me,” she admits. “But a lot of it (coming back) had to do with Joe. He said, ‘This isn’t the end of your career. We can string together a couple wins, I know how good you are and I know what you’re capable of. There’s a few things you need to do and we just have to keep at it.’ It was hard to start from there and to build yourself back up, but he was super supportive of me and he carried me through that.”

Maia Stevenson has not lost since, winning five straight bouts to move her pro record to 6-4. And she’s on The Ultimate Fighter and ready for more victories.

“All those little battles I was winning were turning into me winning fights,” she said. “And then I was on a mission and you don’t want to stop because you don’t want to lose that feeling. It’s there, it’s surreal, and there’s nothing that compares to the feeling of going out there and competing and putting those wins together.”

All she needs are a few more, and they’ll be calling Maia Stevenson a world champion.