If you’ve been around combat sports long enough, there comes a time when you feel like you’ve heard everything. Then Christina Marks hits you with the “I think I fought one of the strippers, too,” line, and all bets are off.

So let’s go back nearly a decade to a strip club in Tijuana. See, it just keeps getting better.

“At that time, it was kind of hard for us to get fights, and so we had to go down to TJ to get fights,” laughed Marks, knowing how bizarre this story is, given where the sport has traveled since then. “Nine years ago, there were no real big events or anything, so I’m like, ‘Okay, I guess. Let’s do this.’”

Marks admits that she “stumbled upon” fighting after running track since she was five years old, specializing in the 4x1, 4x4 and 400 hurdles, even though she could run a 4:55 mile. But she was a quick study in MMA and wanted to 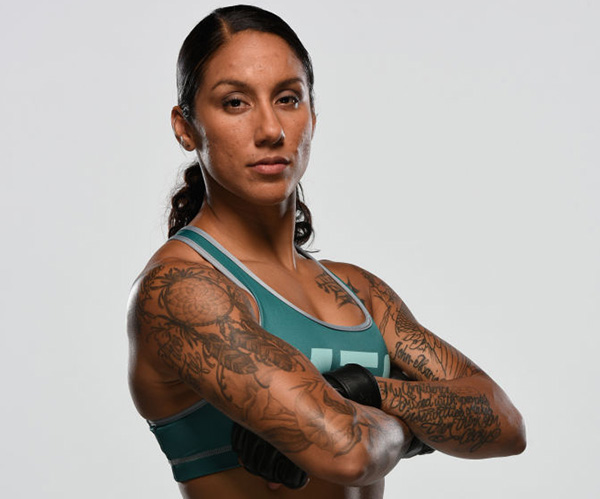 test it out for real. Her family and friends weren’t surprised that she would take a fight in Tijuana.

“I’ve been in sports my whole life, so they know how I am and that I do stuff like this,” she said, but her mom couldn’t go to the fight because she had to babysit Marks’ son, who just happened to be born two weeks before she began training.

So how does this story possibly get any better? Marks won her fight. But she wasn’t done yet.

“I won so fast that they asked the girl if she could go another round,” she laughs. “So it was one fight, two wins in one night.”

That might have been cause for retirement right there, as there couldn’t be more excitement than that, but Marks is still here, still fighting, and now she’s competing for a UFC flyweight title on season 26 of The Ultimate Fighter.

So what’s gone on in the ensuing nine years since her first fight? Well, she turned pro in 2009 and went on to post a 5-8 record in her first 13 fights. Not exactly the recipe for long-term MMA success, but considering that Marks was fighting the likes of Sara McMann, Alexis Dufresne, Colleen Schneider and Sarah D’Alelio above her natural weight and with little experience, it explains a lot. And as she points out, if she could do it all again, she wouldn’t have entered the pro ranks when she did.

“I should have become a pro a few years ago instead of nine years ago, especially just having a kid and not really knowing anything about fighting,” the 31-year-old admits. “But it is what it is and I definitely learned from it, so any time I talk to amateurs and they want to turn pro, I tell them that once you become pro, you can’t go back. And a mistake of mine was not knowing back then that you have to protect your record. There were times when I took fights that I should have never taken that early in my career because I just wasn’t ready for that. Then on the flip side, because I did that I can say that I never fear anyone. There’s nothing I’m gonna see that I haven’t seen already. I’m never shocked about anything that much and I go into fights knowing that and it helps me mentally.”

And when Marks made the move to flyweight, it made all the difference, as she’s won three in a row leading up to TUF 26. So while 8-8 is still a .500 record, there’s a story behind it. Then again, many won’t take the time to hear that story, so Marks has been fighting an uphill battle for recognition.
RELATED: Watch previous seasons of The Ultimate Fighter on FIGHT PASS | Joanna Jedrzejczyk: Like A Boss | Recap The Last Episode

“I had to prove myself even more (because of the record),” she said. “And before I even got on the show, I moved down weight classes and that’s when I went on a three-fight win streak and I showed that even though I did lose early on in my career, I have learned and grown from that. But I do think that I was overshadowed by other people or I had a fight lined up and that girl got signed up to the UFC or somewhere else, and I’m like, ‘What the heck?’ It honestly just drove me more to prove that I am a good fighter.”

That drive was born on the track, and after achieving plenty of success there, California’s Marks is determined to do the same in mixed martial arts.

“I’ve always been at the top when it came to track or to any sports, so I’ve always been the person to beat,” she said. “And in fighting, I guess I felt like I was getting overshadowed by a lot of things and I know I’m better than this. That made me work harder and harder.”

“Fighting has challenged me more as an athlete as well as physically and mentally,” Marks said. “So I think that’s what I’m in love with – the challenge. This is what I choose to do right now, so I don’t need to fight, but it’s something I want to do. And I want to show that I belong and really can do this sport and be good at it.”
Save