The fight game can be cruel, just like life can take someone in directions they never saw coming. When life and the cruelty of the fight game intersect, you have the story of the last three years of Barb Honchak’s life.

Widely considered to be the best flyweight in women’s MMA and one of the best in the sport, pound-for-pound, Honchak was the Invicta FC champion and seemingly on her way to big things before life got in the way after her November 2014 win over Takayo Hashi.

“My gym had some changes in it and I had some injuries I was nursing, so between the injuries and my gym changing, I knew I was going to be out for a little bit,” she recalled. “I told my husband, who had been wanting to look for career advancement, to go ahead and look for jobs. So then we moved across the country for his job, and then my plan for the gym I thought I had lined up out here didn’t work out the way I planned, so it took a while for me to get my feet under me and figure out the MMA scene out here and where to train.”
RELATED: Watch previous seasons of The Ultimate Fighter on FIGHT PASS | Preview Tonight's Episode | Recap Last Week's Episode

As this went on, the weeks turned into months and into years, and at a point, she looked retirement in the eye, wondering if she would ever fight again.

“Yeah, I definitely debated about hanging up the gloves,” she said. “But I could never really get it out of my system. I knew in my heart I wasn’t done.”

She wasn’t. When the Bellator promotion opened up a women’s flyweight division, she thought of a return there, but it was when the UFC announced the formation of the women’s 125-pound division and a season of The Ultimate Fighter that would crown a new champion that Honchak found her opening to put the gloves back on again.

“I feel like I needed that TUF show to happen to get back in,” she said. “I get to be in a house with a bunch of people in my weight division, so I get to see where I stacked up in the rankings almost immediately after being out for almost three years. And they made it for the title, so it’s the quickest route to the title and it’s a guarantee. So why wouldn’t you take that opportunity?” 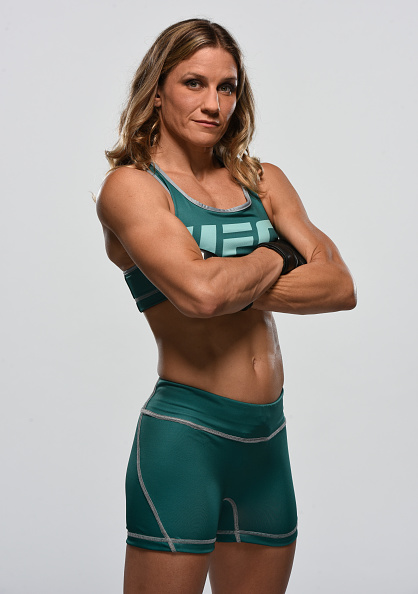 The news of the 38-year-old Honchak’s return was greeted with plenty of good wishes from fans and her peers. And for those who didn’t know of the career that saw her compile a 10-2 record with wins over Felice Herrig, Nina Ansaroff, Roxanne Modafferi, Aisling Daly and Leslie Smith, they will get their first dose of her tonight on TUF when she faces Gillian Robertson. And oddly enough, her absence has made hearts grow fonder to see her back.

“I think there are people on both ends,” she laughs. “There are people that are excited to see me back and people that aren’t. Half the people love you, half the people don’t. Some people want to see the champ fall and they didn’t get to yet. I think people are going to be curious to see if I still have it, and just curious in general to see me back after being gone for a while. So I think being gone a while probably does make you a little more enticing.”

That’s from a storyline point of view, because everybody loves a good story. But what about the fighting? Does Honchak wonder if she still has it after three years away?

“Women’s MMA is still a new sport relative to men’s MMA,” she said. “It’s still evolving rapidly, so three years is a long time to be out. And I was curious to see how I would stack up against girls in that house. Everybody seems to be changing weight classes differently and people train differently. Even in the three years I’ve been out, it’s changed and it’s evolved.”

But Barb Honchak is still a fighter. Three years away can’t change that.

“Fighting is a natural thing,” she said. “It’s one of those things that all animals on the planet know how to do from a really young age without anyone teaching them. Everybody knows how to fight, but we’re not allowed to. It’s not appropriate in most places in society. (Laughs) But I feel like people crave it and need that outlet. I feel like those of us that actually get to do it accept that part of us. It’s a violent part of us that we accept, but the way we do it doesn’t feel violent; it just feels natural. So I guess in a way we are different because we get to do that.”