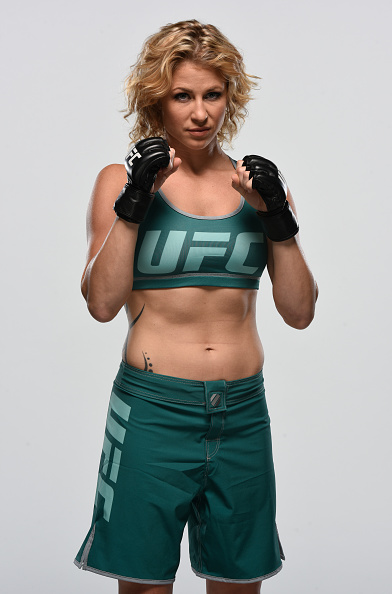 There’s no surefire method to make a fighter. Some are born in the inner city, others in rural areas far from a metro area. TUF 26 competitor Ariel Beck, the fighter, was made on a ranch in Montana, and she may have a horse to thank for making her tougher than most.

As a junior in high school, there were no thoughts of fighting or being in a tournament to crown a new UFC flyweight champion, but she was an athlete getting ready for her seasons in volleyball and rodeo to begin. Then a horse she was preparing to ride kicked and wound up hitting her in the leg.

“He went running around the corral going crazy and I called my parents,” Beck recalled. “My Dad told me just to walk it off. (Laughs) Good thing I didn’t because I would have kept breaking it. And it was the day before my first volleyball match and two days before my first high school rodeo and it put me out for both seasons.”

In ranch life, there’s no such thing as, ‘Okay, I’m done with this, see ya later.’ So when Beck healed up, it was back on the horse (pardon the pun), and back to all the other things that may make city folk cringe in fear.

“I grew up on a ranch, was on horses since I was in my mom’s little backpack, and as soon as I could hold on to the saddle tight enough, I was riding horses,” she said. “We grew up with it. It’s part of life. Either horses or a four-wheeler or dirt bike and I got hurt on those two. It’s a matter of pick your poison out there.”

Who takes one step closer to becoming the FIRST-EVER UFC women's flyweight champion?!

Beck moved on to even more dangerous pursuits before she got a dose of boxing and decided to shift her focus at 18.

“I did a little steer riding, and then I got smart and just started fighting girls that were my size,” she laughs, making it clear that the 9 to 5 world wasn’t going to be her final destination.

“Correct. I’m not about being inside their little boxes.”

A pair of bronze medals in the USA Nationals followed for Beck, who turned pro in 2012, and while she had potential to make noise in the sweet science, A few stars aligned to prompt a switch to a new sport – mixed martial arts.

“It was more of the next step in life,” she said. “I was boxing and enjoying it and having a great time. I went pro, had a couple fights and then I just started hanging out with some MMA fighters and ended up moving towns to a place that didn’t have as good of a boxing gym but they had an MMA gym. So I was like, ‘Okay, maybe I should try this out, especially while I was younger and don’t break as easy and am still able to bend in all the positions.’”

Now she’s on The Ultimate Fighter, and though the 4-4 pro doesn’t rule out a future in boxing completely, she’s all-in with MMA at the moment.

Related: Watch previous seasons of The Ultimate Fighter on FIGHT PASS | The Rise of Women's MMA| Get to know TUF Cast: DeAnna Bennett

“I liked the science behind it,” Beck said. “And after I started learning, it was really exciting. And then, thanks to my ranch life growing up, when we started learning how to go into mount, it’s kind of the same as riding a horse. You’ve got to stay in the center and keep your balance. So I think I have to ride this MMA one out for a little while. Not that I would never go back to boxing, but for now, it’s gonna be MMA.”

The 26-year-old has gotten plenty of attention thus far despite her .500 record. In 2015, her loss to Andrea Lee in the Legacy promotion was named AXS TV’s Fight of the Year, and her split decision defeat to TUF 26 castmate Rachael Ostovich resulted in a Fight of the Night bonus. So while Beck would have liked to enter the TUF house on a winning streak, she had no doubts about her ability to compete with her fellow flyweights.

“I wanted to get a couple wins and get a win streak going, but at the same time, even my losses have been very entertaining,” she said. “They were all exciting, good matches, and I knew I had that on my side. My record could have been better, so I felt like I would need to prove myself a little more at that next level. But I’m right there with those girls.”

And like she’s said before, no one in that tournament is ever going to kick her as hard as that horse did. So is it safe to say that she can’t be intimidated?

“I think I always get that nervous feeling when I’m fighting,” Beck admits. “It’s like, ‘Why am I going in there to get in a designated fight?’ For the average person, that sounds pretty weird. But just the thought of potentially losing, even if I know I’m gonna be all right and no girl’s gonna kick as hard as the horse does, and my life’s not at stake for the most part compared to being bucked off a horse – there’s no ref to stop the horse – I just hate losing. That thought that I got beaten by somebody else makes you question it. But I always feel good in there knowing that even if it comes down to getting beat up, I can still hold my own and stick with it.”

She’ll do it with a smile as well.

“I hope they (TUF viewers) take away that I am a little ball of sunshine that just likes to have so much fun, but I’m still a competitor and I want to compete with some of the best and have a great time doing it.”