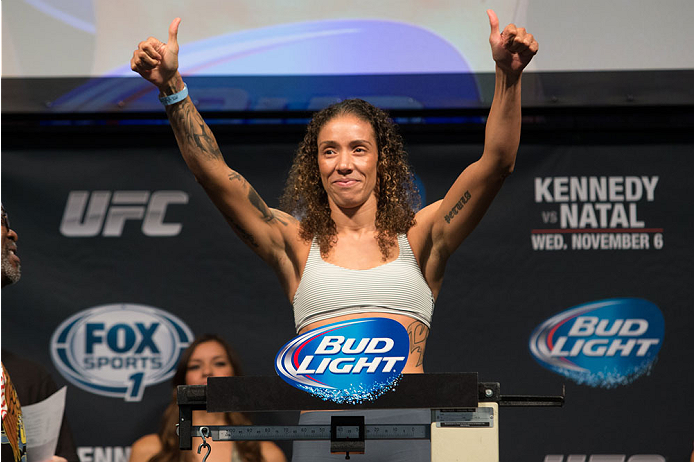 How bad was the wait for Germaine de Randamie to get back into a fistfight?

“Pretty bad,” she chuckles, the type of laugh that can only be uttered when the wait is almost over. “I always try to think things happen for a reason and we will see this week if it all worked out for the better. It’s been a long, long wait, but it’s been good. I’m just happy to get back in there and make the most of it.”

This Saturday, the Netherlands native fights for the first time since a November 2013 loss to Amanda Nunes, a spell of time that has seen “The Iron Lady” deal with injury, return home to Holland, and then wait for that phone call all fighters wait for. It’s a peculiar limbo particular to prizefighters. When will you heal up? Once you’re healed, how hard do you go in the gym if you don’t have a fight, knowing that people get injured all the time, leaving the door open for a late-notice call-up?

“Sometimes it’s hard, but I always think that anybody can drop out of a fight or could get injured, so I always want to be on stand-by,” de Randamie said. “But it can be hard sometimes because you push yourself and push yourself and you’re waiting for that moment and keep pushing, and then the call is not coming and you don’t have a fight. So sometimes it’s hard because when you get the call, you’re already so sharp that you have to take some gas back because you don’t want to get overtrained or peak too fast. It’s been pretty tough, but I’ve got some amazing people around me that keep me motivated and keep my mind on the goal. Without them, it would be harder.”

And after several years living in Northern California, de Randamie made the trek back home to live and train. You could call it a return to her kickboxing roots, and though she agrees to a certain extent, for the most part, her goal during this training camp preparing for Brazil’s Larissa Pacheco is to work on her entire game, and not just the striking that led her to 46 pro Muay Thai wins.

“I’m a brawler and I like to brawl anyway, any day of the week, so that’s always good,” she laughs. “But I think the most important thing for me was to not go back to what I love to do the most, which is kickboxing. I had to move myself out of the comfort zone. So even though I moved back, and yes, I trained my kickboxing, I noticed in my fights in the past that I didn’t perform the way I should perform. And going back and combining everything together, it made the whole picture come together. So I trained my kickboxing, but I focused on my ground too, and I have to say, the year and a half off did help me to improve my ground game.”

An MMA pro since 2008, de Randamie’s 4-3 record represents a work in progress, and she knows it. And while Nunes snapped a two-fight winning streak that saw de Randamie defeat Hiroko Yamanaka and Julie Kedzie, the Iron Lady is on the right track, allowing her to make the 16 months off work for her and motivate her.

“The biggest thing I had to work on in the time off was the mental part,” she said. “Physically, a body is able to do more than I think we do, and mentally, a lot of people forget sometimes that I have a resume that is pretty long already. I have 46 pro fights in kickboxing, and sometimes you hit that point where it’s getting hard to motivate and push yourself to do it again. Most of the girls that fight MMA, they have a maximum of ten fights, and that’s including an amateur record. And I have 50 pro fights, so it helped me put things in a better perspective – my ground game, my stand-up, and mentally putting my mind to think. I think in the last few years I stuck too much in the old things I did in kickboxing, and I had a hard time adjusting. Now, by putting everything together and having a lot of time off, it helped me to train every element better and now put it all together.”

So the striking is there, the ground game is coming along, and the mental game is right where she needs it to be. Sounds like the 30-year-old is about to make a run in the competitive women’s bantamweight division, but no matter what happens on Saturday in Dallas, de Randamie’s life can be summed up in a recent Instagram post that read:  “Die with memories, not dreams.”

“I’ve always been a person that doesn’t like to live with regrets,” she explains. “Of course, everybody has things in life you do and you make decisions that you would have changed if you think about them, but I have had a beautiful and an amazing career already, no matter what’s going to happen or what’s ahead in the future. I got to live my dream. Not a lot of people gave me a chance of making it as a kickboxer to the UFC. So I got to accomplish a lot of dreams and I got to fight a lot of odds. I always said I will write my own history, and I’m planning on writing a nice book for myself. There are a lot more chapters to go.”