Gerald Meerschaert Fueled To Get A Finish

Gerald Meerschaert doesn’t pick up the saxophone like he used to, but if he did, what song would he play following his controversial split decision loss to Kevin Holland in March?

Meerschaert returns to the Octagon this Saturday with a high-profile main card assignment against Trevin Giles, so the news is good for the career of the Milwaukee product. But that doesn’t mean he’s forgotten the Holland fight, one that stings more than his previous UFC defeats against Jack Hermansson and Thiago Santos.

“They’re all pretty awful when you lose,” he said. “But that last one definitely was a little bit harder to take. The Hermansson fight, I felt like I was off that night and I could have fought a lot better, but I ran into a guy who’s really good. Obviously he’s continued to do very well for himself, and even if I was a hundred percent on, I would feel like I would get the win but I don’t even know that it would’ve been easy because he’s such a tough guy. And then when I fought Santos in my third UFC fight, I was on and ready that night, I just feel that I ran into a bigger, better guy. But this last one, I don’t see how I lost that fight.” 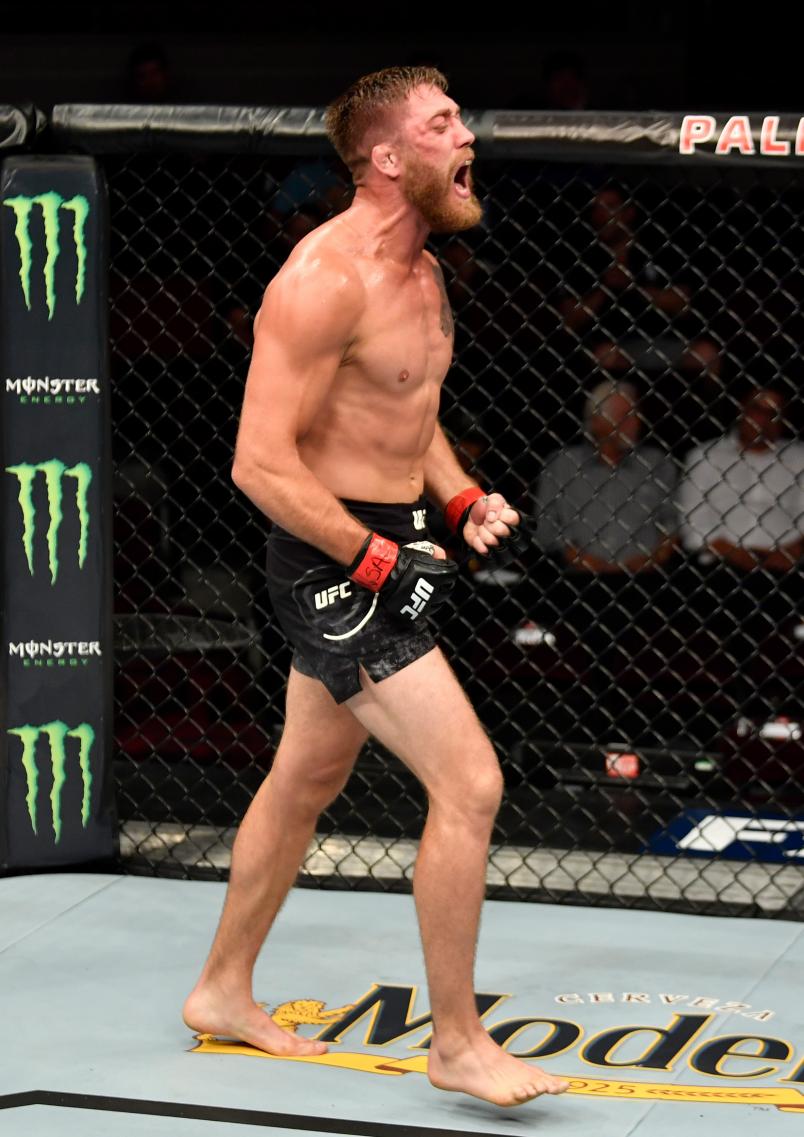 Gerald Meerschaert celebrates after his submission victory over Oskar Piechota of Poland in their middleweight bout during The Ultimate Fighter Finale event inside The Pearl concert theater at Palms Casino Resort on July 6, 2018 in Las Vegas, Nevada. (Photo by Jeff Bottari/Zuffa LLC)

Many agreed with Meerschaert, with 14 of 17 media members polled for the MMADecisions.com website believing “GM3” should have gotten the nod. But it wasn’t meant to be, with Meerschaert left baffled when the scorecards were read.

“I could see maybe giving him (Holland) one round just because I know some judges value striking a little bit more than grappling, but when you go over the rules, it’s effective striking, effective grappling and Octagon control, and I got two of those three for pretty much every round,” he said. “So I wasn’t really sure how they saw what they saw, but I can’t change it and, if anything, I just gotta look at it like it’s my job to finish the fight and I didn’t finish it, so I can’t be too mad about it.”

It’s the frustrating part of being a professional prizefighter, but Meerschaert, a 39-fight veteran, knows that dwelling on a negative result can only lead to more of them. So he’s taken the lessons learned from March and moved on.

“There’s definitely room for some changes,” he said. “I was trying to finish the fight the whole time; I can’t really think of a time that I wasn’t either trying to get him down to get to his neck or had my hand near his neck going for the choke. So I think a little bit of it is, in the future, taking my time more and softening him up and maybe throwing more strikes while I’m on top to open up the submission. Even if I’m not doing a lot of damage, at least make him freak out enough that it makes the neck more available instead of just trying to hunt for the submission before I do anything else.” 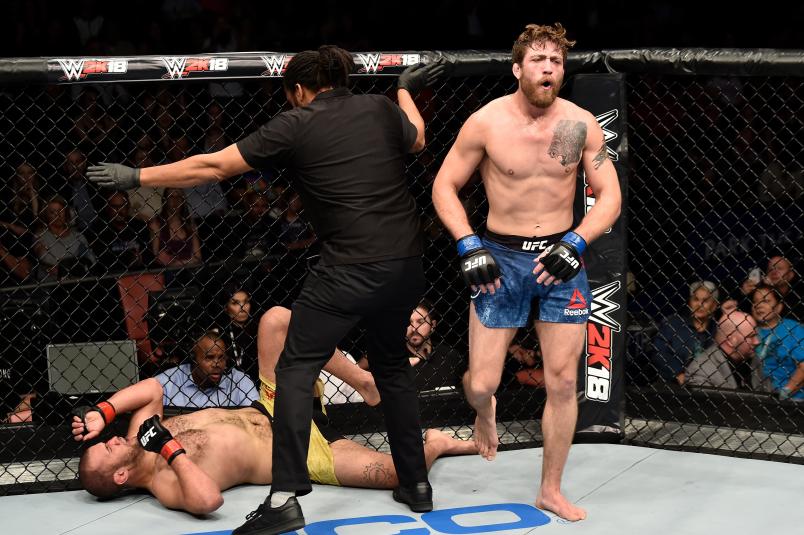 Gerald Meerschaert reacts after his TKO victory over Eric Spicely in their middleweight bout during the TUF Finale event inside Park Theater on December 01, 2017 in Las Vegas, Nevada. (Photo by Jeff Bottari/Zuffa LLC)

Facing Giles, Meerschaert will be in with a top prospect coming off the first loss of his pro career to Zak Cummings in May, and it’s a fight the 31-year-old is looking forward to because he feels it will bring out the best in both middleweights.

“If you watch my fights, I really go out there and throw down, and Trevin Giles is no joke,” said Meerschaert. “He fought one of my teammates back in the day – Brendan Allen, who just got a contract – and I’ve seen Trevin before in Vegas. Super nice guy, nothing bad to say about him and I’ve seen his fights; he’s kind of a boxer-wrestler, but he chucks that right hand and he’s out there to get you. So it’s gonna be an exciting fight.”

And that’s all Meerschaert wants these days. Judges need not apply.

“I don’t know that I’m necessarily putting it (the Holland fight) past me, as much as using it,” he said. “This is the first time in all my fights that I feel I was on the wrong end of a decision. If anything, it’s gonna be like ‘Y’all ain’t gonna screw me over again.’ I’m not letting anybody take this away from me. I’m going out there and one of us is going down one way or the other. I’m not gonna let it go the distance.”