Gerald Meerschaert normally isn't one to get involved in trash talk. Things are different with his UFC 248 opponent, Deron Winn.
By Gavin Porter, on Twitter: @PorterUFCnews • Mar. 6, 2020

But thanks to some heated Twitter exchanges with his UFC 248 opponent Deron Winn, the UFC veteran will undoubtedly have extra pep in his step as he makes his tenth walk to the Octagon.

That feeling of dislike has provided added motivation for Meerschaert and given him a feeling that he hasn’t had in some time.

And “GM3” cannot wait to unleash what he has bottled up.

“I feel differently about this one than I have in a while, like I really want to get my hands on him,” Meerschaert said. “I want to punch him in the face, I want to make him suffer. I haven’t had that fire and that drive like that in a long time.”

Disliking his opponent isn’t something that Meerschaert is particularly used to, as he usually tries to keep his calm throughout the lead-up to a fight. But Winn was able to awaken this rarely seen side of the Wisconsin native, and that renewed fire comes with a warning.

The Roufusport product also has extra motivation stemming from his UFC Tampa loss to Eryk Anders. Many people thought that Meerschaert deserved to have his hand raised, but instead he suffered his second close split decision loss in his last three fights.

Those losses have helped Meerschaert flip a switch in his training and he’s ready to leave them in the rearview mirror.

“I haven’t gotten the nod on any close decisions yet, so I know for a fact I can’t let it go to the judges,” Meerschaert said. “And what better way to do that than get a guy I already don’t like, and I want to put a hole through his face.”

“I just got to prove that I’m still an exciting fighter and I still got a chance of holding that belt someday. It’s not quite a .500 record but it’s getting close and you can’t be dropping close fights and you can’t not have exciting fights if you want to stay in the UFC, so that’s my job.” 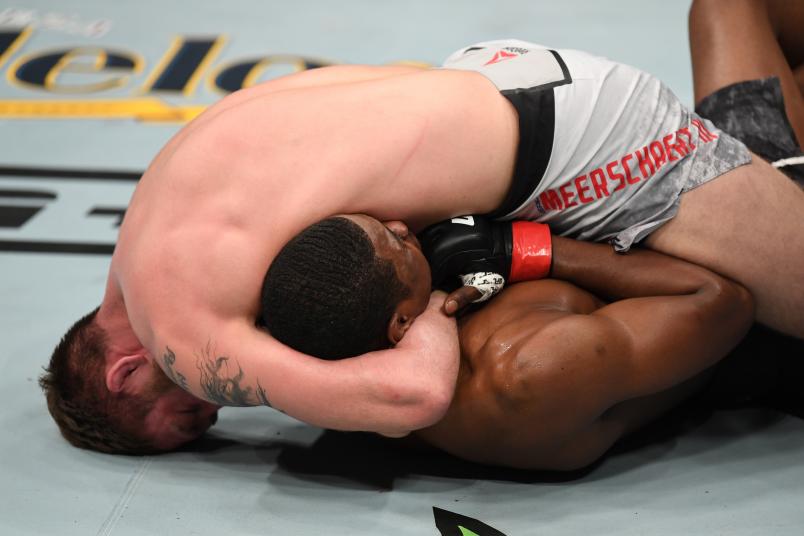 Meerschaert’s job at UFC 248 is to take care of business against Winn, who has had mixed results in his two-fight UFC run. Winn started off strong, getting the victory in a Fight of the Night performance against Eric Spicely last June, but it was back to the drawing board after he dropped a close split decision to Darren Stewart at UFC Boston.

The Milwaukee veteran isn’t impressed with what he’s seen out of Winn thus far and he doesn’t see what all the hype is about.

“He’s 1-1; I started out 2-0 in the UFC and his Fight of the Night that went to a decision, I finished that guy within two rounds,” Meerschaert said. “All that hype, he can take that and shove it somewhere.

“There’s not a place that he can win this fight.”

You’re not going to want to miss Meerschaert finally get his shot at Winn. Tune in to the UFC 248 prelims at 8pm ET/5pm PT on ESPN.